A pop culture remembrance of Prince

It's been a week now since the news that the artist known as Prince has passed away at the far too soon age of 57. The out pouring of sorrow at his death is  just as massive as the lamentations made for David Bowie earlier this year and hopefully, we will be given a break from such sadness for the rest of the year.

With many things having been said already about the brilliant glory of his talent, my look back at Prince will focus on other media platforms of his, starting with the pop culture classic Purple Rain.

This was his film debut and for most of the public back in 1984, this was their first introduction to Prince's blend of stylish glam,sexual charisma and musical prowess. The plot is a basic "singer-struggling-to-be-a-star" format but Prince brought his vivid on screen presence to the film and made it immensely watchable.

In addition to showcasing Prince and his band The Revolution, audiences were also introduced to Morris Day and the Time as well as Apollonia, who played his love interest and was one of the many female artists that he gave creative support to over the years.


The movie was a smash hit that year and it's safe to say that out of the four movies that Prince made, this was the best of the bunch. It's the one movie that defines him to most of the fans and it's not a surprise that a number of theater chains held special showings of Purple Rain over the past weekend.

I am surprised that none of the songs were nominated at the Oscars that year. Yes, Purple Rain did win for Best Original Song Score(a category that has since been retired) but certainly songs such as the title number or "When Doves Cry" deserved to be at least considered there:

I have to say that my favorite Prince pop culture outing is his array of songs for the 1989 soundtrack of Batman, most of which were written directly for the Tim Burton film. Sure, some folks don't see it as a major part of his discography but fans like me adore it nonetheless.

What's amazingly cool about this soundtrack is that Prince didn't simply deliver the standard hit single or two to highlight the hero moments in the film or as end credit background noise.

Instead, he turned the whole thing into a mini rock opera, having each song be attributed to characters in the film as well as a couple he invented for the narrative arch. One of those he created was "Gemini", a combination of good and evil to represent that Batman and Joker were two sides of the same coin(he's featured in "Batdance" which I'll get to later).

Batman and Bruce Wayne had their own numbers(" The Future" and "The Arms of Orion") along with Vicki Vale("Lemon Crush") and of course, the Joker. Naturally, the Joker songs are Prince at his most wicked best, with "Electric Chair" being my personal favorite: 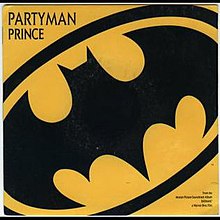 Out of the Joker songs, "Party Man" is better known as it was used in a pivotal scene in the movie and it's a fun romp as well. Yes, "Bat Dance" is rather odd, I will admit, but to be fair, it was clearly meant to be an end piece for the entire album and not a solo release.

I know that the video for it alone seems to sum up for many people what that album was all about but I beg you to give it a full listen. It's one of the few albums that I have listened to in it's entirety in my life and believe me, there is some sizzling meat on those bat bones to savor.

The  twists and turns of the lyrics combined with the mix of movie dialogue makes the entire record a very unique experience ,sort of an alternate version of Burton's Batman with a much darker and raunchier tone that still compliments the cinematic work quite nicely. Not an easy trick to pull off yet Prince made this look so wickedly easy:

Apart from his films, Prince didn't make a lot of appearances outside of award shows on the pop culture scene. He was on an episode of Muppets Tonight in 1997 and was the focus of a Super Bowl Special episode of New Girl in 2014.

One of his last big TV appearances was an SNL performance and Saturday Night Live did a great tribute to him, with songs that he performed on the series over the years, plus clips of a reoccurring skit called "The Prince Show"(with Beyonce as co-host). It's a shame we didn't see more of him on the small screen beyond that yet at least there are some left to cherish.

Prince Rogers Nelson was one of those artists who truly defined the word "unique" and his loss is keenly felt by many in that community,even Broadway where two of the biggest shows of the season paid tribute to his greatness. My mere words can't express what a treasure we no longer have with us, so let's sit back and let Jennifer Hudson and company honor his legacy properly: