Getting ready for the Gilmore Girls to Netflix and chill 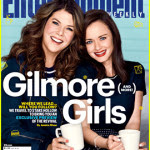 One of the biggest buzzes going around the pop culture landscape these days is the Netflix revival of Gilmore Girls, set to air later this year.

Four ninety minute episodes are in production as we speak, each one titled after a season(Winter,Spring,Summer..you get the idea)and with Melissa McCarthy finally being confirmed to reprise her role as Sookie St. James, all appears to be right with this return to Stars Hollow.

Frankly, if Sookie wasn't included,I wouldn't want to watch as she is as vital to me as Lorelai,Rory and Luke are but I'm glad that things managed to work out. However, since I don't have Netflix streaming(my entertainment budget does have limits,I'm afraid), most likely I will have to wait even longer than some fans to see this continuation of GG. That's not so bad, as it will be available on DVD at some point and then,ironically enough, I'll be able to rent those discs from Netflix. Quite the vicious circle, Dorothy Parker would approve.

No doubt that I'm not the only one who will be seeing the revisit of GG later rather than sooner and that waiting period will go by smoothly as I do have access to the entire run of the series on home video(and yes, that includes the dreaded season 7,sans it's original creators but does offer a bit of closure there).

So, if you're going to be waiting longer that they did for Godot for this new set of Gilmore Girls adventures, my suggestion is to hold a mini-marathon of grand Gilmore episodes of the past. Here is my little list of happy highlights to enjoy once again:

THAT DAMN DONNA REED: This was my gateway episode, the one that got me hooked like a rug into this show. I just happened to catch it on ABC Family(in the olden days before it transformed into FreeForm) and started watching those reruns until I was caught up with the still in progress on the WB(which is now CW, why these networks feel the need to switch up their alphabet soup letters, I'll never know). 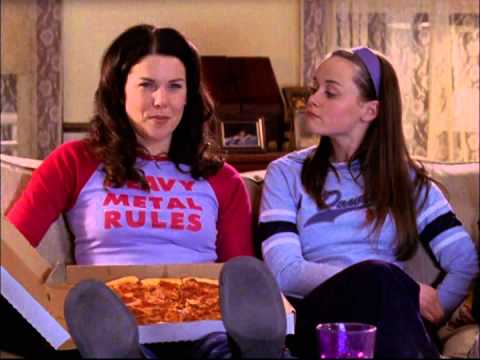 It just struck me as amazingly funny that Rory and first boyfriend Dean would spend most of the episode debating the merits of The Donna Reed Show, a show that I was somewhat familiar with thanks to reruns on Nick at Nite.

Of course, they were fighting about more than just how stereotypical that fifties sitcom was but it was fun to see the metaphorical mirth that developed from their argument, including Rory's decision to hold a "Donna Reed night" for Dean.

What did cement this show for me as a must-see was the bond between Rory and Lorelai, a mother and daughter who balanced friendship with parental relationship pretty nicely there. That connection was sorely tested and briefly severed over time but those girls were as able to reunite with the same ease that they could match each other line for line with witty repartee:

CONCERT INTERRUPTUS: There is so much to love here but the best section of this episode is at the Bangles concert, where Lorelai and Sookie take "nosebleed" seats in order to allow Rory to bring Paris,Madeline and Louise along for the ride.

Not only do we see Lorelai begin her streak of denial regarding her true feelings towards Luke(a conversation that she and Sookie share oh so many times), Paris starts to morph from major nemesis to best frenemy territory with Rory.

Both Rory and Paris go back and forth over that narrow line throughout the series but it does help that both of them can switch from serious to light hearted as the situation warrants(and yes, that is one time only Superman/current DC Legends of Tomorrow star Brandon Routh as one of the college guys flirting with Madeline and Louse):

LIKE MOTHER,LIKE DAUGHTER: Rory and Lorelai are both put on the hot seat at Chilton for not being more "involved" with others, something that they reluctantly seek out a solution for within their own social spheres.

While Rory gets in trouble during her midnight initiation into the Puffs(Paris' quick rant about how she's not going to wait until she has a Disney Princess moment to appreciate herself is a sweet chunk of monologue goodness in and of itself), Lorelai finds herself a complete success as her fashion show plans with the Booster Club go off without a hitch. It's almost too scary at just how well Lorelai is able to blend into that in the bubble world there.

Unlike Rory's social stumbling into one of the school's secret societies, Lorelai is swiftly able to make her debut as a Chilton mom work to her advantage. Even her Nancy Reagan red matching outfits with her mother romp down the runway proves to be the highlight of the evening, something that Emily is happy to subtly rub in:

HELP WANTED: What I adore about this episode was the wonderful bonding between Lorelai and her father Richard(the late Edward Herrmann is and will be missed indeed) as he needed assistance in setting up his new business office.

Most of the time, Richard and Lorelai were at odds with each other, stemming from her long ago decision to raise her child without getting married as well as run away from home. While they did occasionally see eye to eye, a good portion of their relationship was devoted to debating their very different approaches to life.

Here, you see Richard being slowly impressed at his daughter's command of office management and knowledge of new to him technology. Also, Lorelai really seems to enjoy giving him a hand here and the mutual love and respect is sweet to watch. Granted, all good things must end and this bout of family harmony certainly did, yet it was nice while it lasted:

Four episodes at a time feels right to me although some folks may prefer a full season binge or an entire weekend's worth of Gilmore goodness to savor. To me, having too much of a good thing can overwhelm your pop culture palate but then again, your mileage may vary.

Regardless of when or how you ultimately watch this very last goodbye and hello to Stars Hollow, it will be a welcome back worth taking and allowing the original cast and crew to take their final bows as they want to does feel picture perfect, in the best sense of the term: