We all know that there are movies and TV shows based on books(not to mention books based on the latter) but what about books within those fictional worlds that come to life in ours?

It's sort of like that scene in Willy Wonka and the Chocolate Factory, where a device that transforms a giant candy bar into a televised image that you can pluck off the screen and eat. A little strange, to be sure, but you would want to at least try once for yourself.

Lately, I've been sampling a book from a fictional source(thanks to Blogging for Books) that is quite appetizing so far. No, I haven't seen the movie of it's origin but not due to any of the ridiculous controversy surrounding it. Although, I do like the fact that a book is a key plot point in the new Ghostbusters film and that we get to read it, even a "somewhat updated" version.

Ghosts From Our Past:Both Literally & Figuratively, The Study Of The Paranormal is a lengthy title but when you consider that it's supposed to be an academic guide for think tank folks,that makes the joke click in better. Written by Erin Gilbert and Abby Yates(with real world help from Andrew Shaffer), the leading ladies of the GB team, the book is set up into sections that detail the different types of ghosts you might be dealing with and how to handle them. It has illustrations, a quiz and input from the other members of the team as well.

There's also a section for Erin and Abby to share their first experiences with the supernatural, which I found very entertaining. The quiet humor of Erin's childhood haunting by a mean old lady from next door does draw in some strong sympathy for the character and makes me want to see the movie. I suspect that I would like this book more if I had seen Ghostbusters yet I can say that's a nice way to be introduced to this new take on the familiar scary satire:

This also reminded me of another guide book from a film, although this one was made for TV based. In the second Sharknado movie, one of the characters,April Wexler, was touting her new book about fighting those flying menaces and as it turns out, Andrew Shaffer was also on board as the author there!

How To SURVIVE a SHARKNARDO sounds as subtle as the SyFy channel movies it's based upon yet it might be more amusing that the recent entry in the series, which I happened to see the other week. Some concepts can have limited appeal and need to know when to quit while they're ahead. Since this book came out during the early stages of Sharknado's fame, it probably holds up a little better than most of the guides in this particular genre:

I do have to confess that I've enjoyed reading the Nikki Heat novels from Castle more than watching the last couple of seasons of the show. Don't get me wrong, I love the characters but you could tell that the plot lines to keep tension between Beckett and Castle were getting more stretched out than chewing gum(plus, losing some of that good flavor).

Actually, the books seem to have a life of their own, starting with Heat Wave and several more novels, with a new hardcover due out this fall. Even Nikki Heat's fictional predecessor, Derrick Storm, has had both print and graphic novel versions released with an audience happy to read them.

If you think about it, it's slightly ironic that a TV show based upon a writer needing a new literary muse has created such an iconic character that no longer needs that show to strut her stuff: 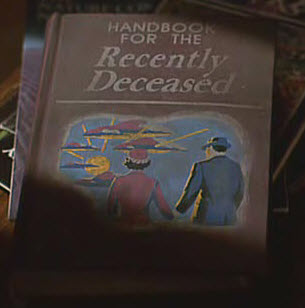 Sadly, most of these books don't have enough power to last long outside of their media place of origin. Nevertheless, many fans would want them but some are just not possible to create.

However, that doesn't mean we can't dream about them. Sure, I'd like to read that first novel that made Grady Tripp such a famous author in Wonder Boys but even if Michael Chabon did  write that, it would most likely not live up to the one that exists in my imagination.

Perhaps some things are best left in that fictional country. On the other hand, having something like a Handbook for the Recently Deceased might come in handy someday, you never know: