The Sci-Fi Summer readathon(hosted by Michelle Miller at Seasons of Reading) officially ended the other day but I must confess that I finished up a couple of days early.

Upon completing Red Clocks by Leni Zumas, I wasn't in the proper mood for diving into Margaret Atwood's The Year of the Flood. Don't get me wrong, Red Clocks was good,however going from one scary future scenario into another was perhaps not the best idea.

In Red Clocks, the not too distant future in America has passed a "Personhood Amendment" which outlaws abortion and a host of other new laws from a rather populist president are making other child bearing options difficult for anyone not already in the traditional marriage set-up. 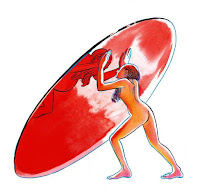 How the general state of things is affecting women is reflected in four characters starting with Ro, a teacher working on a biography of a forgotten female Arctic explorer and trying to be a single mother before the final legal barrier is slammed down in front of her and then to Mattie, one of her students who finds herself pregnant and is unable to even flee to Canada for an abortion due to the "Pink Wall" at the border.

This quartet is rounded up by Susan,a frustrated housewife wanting to end her miserable marriage but not wanting to make the first move and Gin, an eccentric herbalist accused of a crime she didn't commit.

The story is told in segments, identifying the characters as "The Mender", "The Wife","The Daughter" and "The Biographer"(excepts from the work in progress biography are featured during chapter breaks as well). Granted, it's not the typical liner style but that is a strength rather than a weakness here. Sort of like if Virginia Woolf wrote dystopian lit.

Zumas adds a poetic quality to her prose at times, making the raw unspoken feelings of her leading ladies dance for us on the page. It may not be a beat that everyone can or will groove to yet her writing is powerfully wrought and well worth checking out indeed:

As one readathon ends, the page turns to the next and I'm in the midst of planning my TBR for Seasons of Reading's High Summer, which will be for the entire month of July.

First up is Girl in Translation by Jean Kwok, a mother-daughter tale set in Brooklyn. Kimberly Chang and her mother were able to settle there upon emigrating from Hong Kong before Chinese rule was in full effect.

Kimberly's intellectual gifts enable her to attend a posh private school yet she still helps her mom out at the garment factory, a job that demands twelve hour shifts. While wanting to please her mother yet be a part of the American dream, Kimberly is faced with a myriad of choices that pull her in too many directions to follow.

I've heard great things about this book since it was first published in 2010 and considering the current debate over immigration lately, the time to read this is rather timely. A good novel opens the gateways of compassion and empathy, paths that certain spokespeople clearly are avoiding at all costs. Too bad we can't assign reading to those that truly need it:

Another book in that category that is on my High Summer list is Cristina Henriquez's The Book of Unknown Americans.  This story follows a pair of immigrant families(one from Mexico, the other from Panama) who find themselves neighbors in Delaware and share similar problems adjusting to American life.

Both families have young people who connect with one another; Maribel Rivera, who is recovering from a head injury that motivated her parents to make the move to the US for her sake and Mayor Toro, whose family settled in America sooner than Maribel's yet still struggling to make ends meet.

Their relationship is marked with suspicion by both sets of parents, not to mention the local immigrant community. However, a threat from the outside proves to be much more of a concern to all involved. The praise for this novel has been mighty, to say the least, and should be a good companion to Girl In Translation. More importantly, it will be a good book based upon it's own merits: 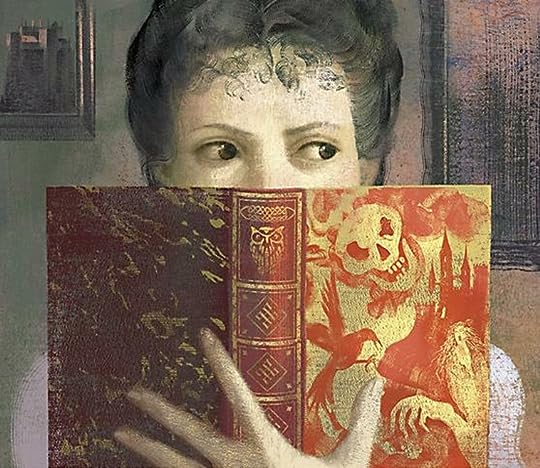 Simply for fun, I'm going to try what I'm calling a Double Decker Reread of Northanger Abbey. Yes, the original Jane Austen novel and the Val McDermid modern take on that slim satire will be side by side repeats for me.

Northanger Abbey is a good summer story as it's unlikely heroine Catherine Morland is given a chance to see the world beyond her country mouse life. Granted, she mostly gets as far as Bath but still, that is big city enough!

Learning a few life lessons as well as falling in love, Catherine's journey in NA is pretty much the mold for many a young lady's coming of age tale, from Dirty Dancing to The Sisterhood of the Traveling Pants(okay, I didn't see TSOTTP but still,...).

Out of the four retellings slated for The Austen Project, Val McDermid's version of Austen's posthumous mock Gothic novel was a real success, along side Curtis Settenfeld's Eligible.  I did read all four books and only two are worth going back for more, in my opinion.

McDermid does keep to the original framework but updates wisely such as sending her Cat Morland to the Edinburgh Festival in Scotland, which sounds amazing to behold! Bath is a lovely place to visit(yes, I've been there) but the social scene these days is very much different from Austen's time. This will be a nice staycation read to be sure:


I still have time to prepare for High Summer, so a few more books will be added on to this particular pile before the calendar page has to be changed there. Also need to finish up a few other reads as well. Those TBR piles do seem to have a life of their own at times, don't they? Oh, well, at least it's a friendly form of life that gives as much as it gets... or does it?!:

Wow! Red Clocks sounds amazing. I just added it to my Goodreads wishlist.

Thanks for joining us for Sci-Fi Summer. I hope you enjoyed it. Looks like you already have some great books planned for High Summer. I have a pretty great line-up myself, as I'm starting a new book challenge July 1st.