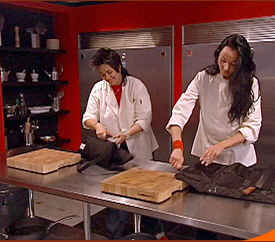 Top Chef eliminated two contestants last night,Josie and Marisa(probaly to even the numbers out after not kicking anyone off last time due to all the cheating accusations)after a challenge to cook a six course meal for actress Jennifer Coolidge(aka Stifler's mom,as Michael gleefully pointed out)and friends,using leftovers in the pantry of Hollywood Social,a pretty fancy restaurant.

One of the big probelms with this challenge,to me,was lack of communication-the chefs were in teams of two,with one course to make that was chosen by random knife pulls(I love the whole knife selection gimmick-don't recall them doing that so much last season). Nobody tried to plan a complete menu(Betty did ask in the kitchen for folks to talk about what they should make but she was ignored)-everyone just walked on in and grabbed up whatever they thought looked good. I'm not a big foodie but it is just common sense to me that if you're making a six course meal,it would be a good idea to combine dishes that,tastewise,flow together. Josie and Marisa made the fifth course,which was two types of fruit salad and a prickly pear/coconut soup. Not a bad idea(that soup did look very Pepto Bismal)but it was served right before the dessert course! Sweet on top of sweet is too much.

The other teams were no better-the first two courses were fish based and Betty & Mia's duck Napoleon was a total misfire(Mia may have been feeling guilty about ratting out Betty last time,which explains why she went along with the dish concept despite her doubts). I agree with Judge Tom that too many of the contestants seem to being playing it safe-middle ground makes middling food,people!

On Gilmore Girls,Lorelai and Christopher went to Paris so that Gigi could see her mom(even tho we didn't-guess they couldn't get Madchen Amick to make a guest appearance)and for Christopher to propose to Lorelai. It was a nice moment but I'm not getting all worked up about,since my storyteller sense is telling me that this will all lead up to Lorelai & Luke getting back together. No,I don't have any spoiler info but my nose knows,you know? The Lane/Zack/Mrs. Kim subplot is more fun for me-Lane having twins,ouch!-and the idea of naming your kids Marco and Polo is cute,in a Hollywood sort of way. Next week,Rory finds out about her parents' secret wedding in gay Paree and gets miffed.

South Park wrapped up their tenth season with a sports movie parody(Trey and Stone must devour those flicks whole,to come up with such on-point mockery)that delievered an unexpected happy ending to some. It's good that they capped things off with a non topical episode,not to mention that topping "Go,God,Go" wouldn't be easy. Perhaps by the time SP starts up again, they can do some riffs on Borat and the OJ book.

Nip/Tuck: What can I say about the Back to the Future-ness of this week's show? Christian cracked me up with his Austin Powers look and Jennifer Elise Cox(Jan Brady from the Brady Bunch send-up movies)was suitable wacky as a grown-up Annie. If you've watched this series long enough,it's not surpising that the girl would become a mental case. Mainly,this episode was about writing Julia off the show(Joely Richardson decided to take time off to tend to her real life daughter's illness)and while that was done well,it did amaze me that Sean and Julia didn't discuss the dead guy in their den from last week! Cheating's a big deal but I think a dead body in the family home pushes that issue to the side.

Brooke Shields will be back next week and it looks like she's going to spill some of Christian's secrets to Sean. Yep,it's dramatime!

Ugly Betty: Will Betty ever get rid of Walter? He's such a whiner and so not helpful to Betty's career ambitions(altho Betty's choice of evening wear for fine dining is self sabotage in itself). Would it kill you to stop clinging to the woman and try some food that isn't in a Happy Meal? Glad to see a non-Fay episode;the plotline is intriguing but it's good to give the characters some fresh air to breathe. Wilemina doing those body shots and getting that Beau-Mart account by revealing her mom/daughter probelms was a good broadening of her personality.

The Office: I've been catching up with the show online and love the whole Scranton Vs. Stamford vibe this season. Of course,those two worlds are now colliding which should bring even more laughs and yes,now we have a Jim/Pam/Karen love triangle.

While I hate this song with a burning passion,this is such a well edited montage of Office clips that I couldn't resist posting for your amusement: