This week,the Final Four contestants on Design Star had to divide into two teams and redesign two rooms in Wayne Newton's guest house. Will and Todd took on the living room and created a huge version of a lazy susan for the sofa to sit on,to give folks an option of switching perspectives in the area. While that's not my idea of comfy quarters,Wayne totally dug it and the platform did work(it really needed a better way to move around than just having someone push it with their feet).

The big drama was in the kitchen makeover. Robb and Kim were supposed to work together but Robb seemed to think that Kim was just there to be his personal assistant and refused to listen to any of her suggestions or ideas because she didn't have any previous experience in kitchen remodeling.

Funny,because later on during the challenge,the carpenter had to raise up the entire counterspace due to the new dishwasher not fitting in properly,which Kim had pointed out earlier to Robb,who took the measurements and STILL DID IT WRONG! Not to mention that he was out and out rude to her,telling she should just"ride on my coattails" to get the project done! Listening to him talk down to Kim like that reminded me of those old "Weekend Update" debates between Jane and Dan:

The kitchen turned out alright and Wayne loved it,even tho the fridge wasn't installed in time(due to poor time management,Robb!). I felt bad for Kim,since this was the second kitchen challenge on the show that she had to work with someone who claimed that they knew exactly how to get things done but still came up short. She didn't take any crap off of Robb and handled the whole thing in a very mature and ladlylike manner.

Robb's attitude was made plain to the judges during the panel and his show was not only cancelled,it was kicked to the curb! Mr. Charming took it well,with his comment that the judges were "fools"-way to make yourself look like a good sport there,Robb!

Will was up for elimination,due to his lackluster on camera presentation(part of the challenge was giving a video demo of the room)but fortunatly,the judges realized that it would be easier for Will to brush up on his public speaking skills than for Robb to change his crappy arrogant attitude in the limited amount of time left for this competition. 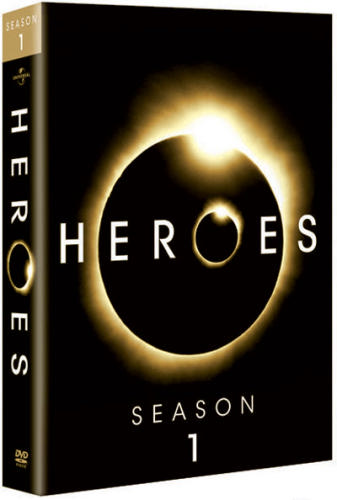 Heroes: Season One came out on DVD this week and I recieved my set yesterday,with the joy one usually has on Christmas morning. So far,I've watched the unaired pilot episode,which runs about 72 minutes and has a terrorist subplot that was scrapped and retooled partially into Radioactive Ted's storyline,played the Mind Reader Game and checked out a couple of Behind The Scenes featurettes.


The best featurette was a profile on Tim Sale,the artist who created all of the Issac Mendez paintings for the show. He was also a technical adviser for the character as well,giving his input on how the loft should look(Santiago Cabrera gives a little tour of the set)and helping the actor with the right way to handle his brushes.

I was surprised to learn that Tim Sale is colorblind and that all of the paintings were originally done in black and white. The color was added on later,after each painting was digitally scanned and then blown up and printed on canvas. Given the fate of Issac Mendez last season,I don't know if any of Tim's artwork will be as well showcased as it was for Season two. However,with this show,most fans know by now to never say never!

My only complaint is that scene selection is not available for the episodes. Look,guys,I appreciate the whole concept of watching an episode in it's intended entirety but sometimes,a girl would just like to watch her favorite Peter Petrelli or Sylar scene right on the spot there,you know? I'm sure there are plenty of fellas who would also like to click right to their favorite Ali Larter or Save The Cheerleader bit there,too! Maybe for Season Two,we could have that option,okay?:

TWO FOR THE PRICE OF ONE

Food Network has started to become a regular staple in my household viewing lately,so like me to get into something once everyone else has already gotten onboard! I have learned a few things there,one is not to watch when you're hungry,two is that Rachael Ray is amazingly cheerful and yet not annoying,and three,don't put honey in the fridge because it will freeze and crystallize on you.

With all the shows they have to offer,here is a tasting menu of some of my favorite FN entrees:

This show goes across country to feature those small town/big city eateries that are the foundation of All American food are still thriving today. A good program to watch before you go out of town,looking for an interesting place to have a regional meal:

Someone mistook my mother for Paula Deen,which lead us to watch FN in the first place,and Mom has become quite a fan of hers(she even whipped up a mini cheesecake recipe of Paula's and gave them out at work. They were a huge hit.). Paula has more than one show on FN but her Party airs over the weekends and look like a real good time had by all:

Emeril is the only cooking show with a talk show vibe that I know of,and the man is just as entertaining on his own as with a guest. I personally prefer to watch Emeril interview Patton Oswalt than Leno or Letterman anytime:

I've only seen a couple of the cake ones but I totally love it. Having four chefs create themed food items in a limited amount of time for not only a chance at winning ten grand but showcasing their skills as well,rocks. The scariest part of the cake challenges is when the finished pastries have to be moved to the judging table-extremely nerve wracking! I loved the Snow White cake made for the Disney Princess Challenge the best:

Two of the new shows on the Fall line-up both share a supernatural theme done with whimsical style. Let's take a look and see which one floats our boat:

PUSHING DAISIES: ABC is giving a huge push to this show,which is a Barry Sonnenfield production that feels more like a Tim Burton movie to me. I like the concept of Ned's lethal Midas touch causing romantic havoc in his life and the casting feels right. Just hope that everything turns up roses for the viewers after a few episodes and that the bloom doesn't fade away midseason:

REAPER: Kevin Smith is the creative drive behind this CW show,that has twenty one year old Sam discovering that his parents sold his soul to the devil,who wants him to be a bounty hunter for escaped residents of Hell. Sounds like a cross between Brimstone and a Judd Apatow movie to me,but I think it could work:

You have to watch Throw Down with Bobby Flay. I love to see his arrogant ass get pummeled by cooks when he challenges them in their specialty dish.