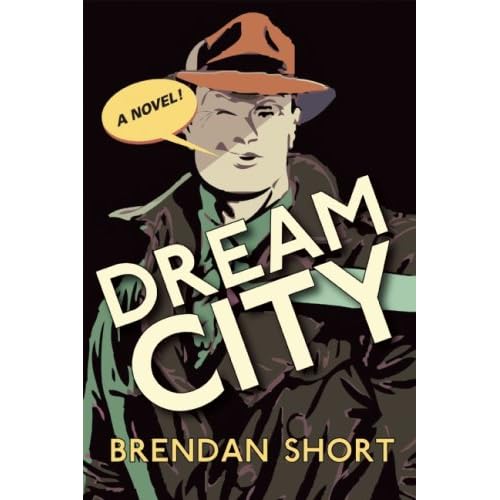 The starting point for Brendan Short's debut novel,Dream City,is set in Chicago during 1934 where six year old Michael Halligan is torn between two sets of loyalties.

While he fears and dreads his blunt and occasionally brutal father,Paddy,a low level mob enforcer whose ambitions are constantly derailed by his paranoia,Michael is very reluctant to keep quiet about the secret life of his beloved mother,Elizabeth.

In her despair over the choices she's made in life,Elizabeth is drawn to The Society For Sacred Possessions,a group claiming to be out for the social concerns of the poor. She's particularly attracted to Eddie,the charismatic leader who promises more than he delivers.

He even dreams about being like one of his heroes,a fantasy figure named Mike Steele who takes no guff from anyone and is afraid of nothing or no one that dares to get in his way:

The sudden death of Elizabeth shocks Michael to the core and forces both him and Paddy to make the attempt to become a family.

That bond never develops as they grow older,with Michael retreating more and more into the world of his Big Little titles and Paddy's attempts to become an independent businessman lead him to being humiliated back into his place,which also causes a further rift between him and his son.

While Michael does manage to do better in life than his father did financially,he still has trouble making human connects,even with his wife Sarah.

Michael's one true love in life are the Big Little Books,to which he spends most of his lifetime collecting. His main goals are to have the ultimate library of BLB titles and memorabilia and to find the one book that eluded him as a boy,Trouble In The City of Dreams.

That book was the one promised to him by his mother just before she died and Michael is determined to make his collection complete with that volume just about any way he can.

Short's novel may seem to be another novel about folks with comic books on the brains but it's much more than that. It's an ode to the emotional loneliness that some people can't quite shake off as they move on in life,the scars given in childhood that never fully heal.

The sorrowful family landscape of the book is not solely focused on Michael;a careful eye is also fixed upon his father,a man trapped by his own personal limits as a person and Oswald Knolls,a former boxer who became a promoter and PR man for the Big Little Books whose respect for the books and the artists he hopes to keep alive within his own bloodline. Short goes right to the heart of his characters and shows a great deal of empathy for them,especially in their less than stellar moments.

Dream City is an impressive first novel and one that folks should get a hold of before Brendan Short dazzles the literary world with more of his greatness. The one thing that you take away from this book is the importance of making those early bonds with your children strong and healthy ones. Don't get me wrong,Dream City is not some parenting guide for folks to take notes from but it display the affects of a broken childhood in a brilliantly beautiful way:

Would you believe that the only reason I'm even vaguely familiar with Dick Tracy is because of Daffy Duck lol? I've never seen any of the movies or read the comics but I might just have to do that!

This does sound like a good book though. I have one or two of those Big Little books although I used to have a lot more.