NYC Comic Con 2009 and the joint was certainly jumping 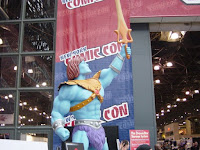 The New York Comic Con this weekend was a busy place indeed,with plenty of folks eager to meet and greet each other as well as check out the latest offerings from not only from the world of comic books but movies,video games and TV.

My sister and I did the full three days of the show,with bags of free goodies(and a couple of purchases-gotta stimulate the economy there!)and some fun experiences to share as our reward. There's a lot of ground to cover,so I'll skip the sweet talk and get right to the good stuff as best I can. 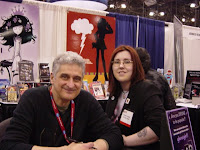 My sister got the chance to meet one of her influences,Patrick McDonnell the creator of Mutts,who was signing his new picture book South at the Hachette booth. She also got the chance to show him the arm tattoo she has of one of his characters,which pleased him to no end.

I met up with a reality show superhero from the first season of Who Wants To Be a Superhero?(wonder if there will ever be a Season Three?). Fat Momma was on the scene,signing everything from photos to her own line of comic books to replicas of her power packing doughnuts.

You have to give the lady loads of credit;she may not have won the competition but Fat Momma has made the most out of her moment in the spotlight by touring schools to promote positive messages of tolerance to kids and making appearances at conventions like this(she also mentioned running into Season Two's Hygena on the circuit). She's a real sweetheart of a superhero: 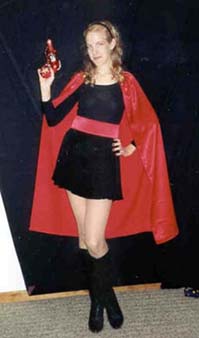 Carrie Vaughn,the author of the Kitty Norville series made several appearances at the Con(not in this outfit,I swear!)and did book signings as well. She was one of the writers at a round table talk for fantasy writers(more on that in a minute) on Saturday that I attended.

I also met her at the publisher's booth but had the opportunity to talk to her on Friday by calling into Blog Talk Radio,where she was being interviewed live and on the air.

She was great to listen to(perhaps she was a DJ in another life)and if you want to hear what my voice sounds like,just click here to listen. My questions were about Carrie's traditional approach to the mythos of werewolves and then later on,a query about the possibility of her writing a vampire novel. As a bonus,you'll find out what the "T" stands for in Lady T. 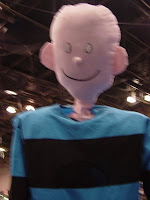 A personally important panel that we went was the second annual Comicbook Artists Guild Awards,which my sis was a two time nominee for in the categories of Best Cartoonist and Best Web Comic.

While she didn't win,we were both genuinely happy for those who did such as ZMan,Liz Ortiz and Matt Ryan,who spent a good amount of time on the Exhibit floor in costume as one of his creations,Bigger(that's him on the left hand side photo). Congrats to all of the winners!

It was standing room only by the time I got to the Sci-Fi,Supernatural and Fantasy Writers Round Table on Saturday. The group of ten authors present included Tamora Pierce,Jackie Kessler,Peter V. Brett,Carrie Vaughn and Kim Harrison.

Their legions of fans were out in full force and even tho it was a bit crowded,the authors did get to talk about their work and their early influences. Ursula Le Quin's name was mentioned by several folks,along with Robert Heinlein and even a shout out for The Princess and the Goblin and the old school animated version of The Lion,The Witch and the Wardrobe that I remember seeing as a kid. 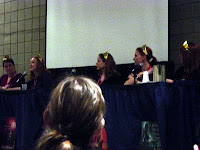 Kim Harrison was also at the Kick-Ass Female Authors and Their Killer Heroines panel,along with Vicki Pettersson(who was on the Sci-Fi Supe and Fantasy Round table the previous day with her),Jeaniene Frost, Jocelyn Drake andMargaret Ronald.

The ladies were all given Wonder Woman crowns to wear on the panel(a popular giveaway item that my sister was able to get for me)and the topics ranged from why paranormal fiction is so popular these days to the difference between urban fantasy and paranormal romance and then to why bad boys types frequently pop up to plague and/or fall in love with the leading lady. It was a great discussion,with plenty of good natured laughs and interesting takes on the genre. Also a good way to be introduced to these authors,some of whom I wasn't familiar with before but will definitely catch up on.

And,yes,I made it to the It's Just Some Random Guy panel,where all assembled saw the debut showing of the finale to the most recent Happy Hour storyline. The crowd loved it,and plenty of questions were asked and answered,even the goofy ones such as "Do you like breakfast cereal?"(Random Guy ultimately chose Cookie Crisp as a classic standard)

Alas, Random Gal was not able to join him but did have a special video greeting for the fans(and yes,Random Guy did remember to put her on speaker phone):

Here are a few candid shots that my sister took at the show of our fellow attendees: 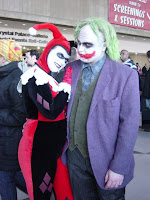 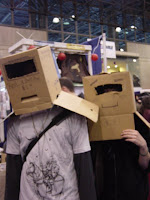 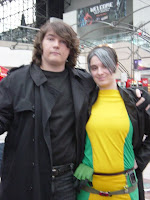 TO SUM THINGS UP

It seems to me that many of the folks who attended the NY Comic Con this year had a good time,despite the troubling economy and the hectic crowds. I know that some people feel that the convention has gotten too commercial and too far out of focus from comic book art. The truth is,those big flashy displays are a necessary means to an end that allow new faces in the field to showcase their skills in Artist Alley and hold workshops,meet and greets and such.

Emerging artists like the fellas at Cyanide and Happiness, the gal who created Octopus Pie and my sister Stephanie are the ones who benefit from a huge gathering like this and if having a honking big video game demo helps to bring that about,fine with me. The whole "art for art's sake" notion is a luxury item,folks.

Instead,let's drop the righteous anger riffs and embrace the fun,unless those riffs are beneficial to your work getting the attention and the revenue it needs:

I don't remember ever hearing about Who Wants to be a Superherp but it looks interesting lol. Looks like you had a really great time! Off to listen to that interview now, gotta learn what that T stands for lol :o)