One of the biggest book battles lately has been between Amazon and the publisher Hachette, who are negotiating a new deal regarding their e-book pricing.

Basically, Amazon wants to call the shots and are not above using strong arm tactics to get their way such as not allowing any of the books released by Hachette (print and electronic) to be pre-ordered at their site and delaying the delivery time of other titles that are currently in stock.

Many authors find this abuse of their work unacceptable and are speaking out to encourage a boycott of Amazon. Stephen Colbert, one of the affected writers, had fellow author Sherman Alexie on his show this week to talk about this issue and to put a pointed protest in motion. They are encouraging folks to place their pre-order for a debut novel entitled California by Edan Lepucki at Powell's Books as well as print out stickers that say " I Didn't Buy This At Amazon". 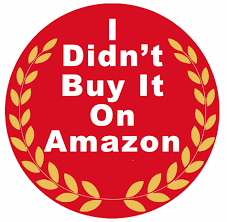 No doubt some of you reading this are saying to yourselves,"Oh, come on, Lady T! This is just another money fight between corporations here, no big deal!" Well, actually, it is a big deal because as Sherman Alexie pointed out, the ones to root for in this throw down are the authors(along with the readers) whose work is being used as playing pieces in a game that benefits no one in the long run.

Yes, cheaper books sound good but they come at the expense of the writers, who will ultimately have their income cut to the point of instability. Granted, my e-books are not on Amazon( although my publisher Smashwords has no problem with their authors making a separate deal to sell their work there) but this attempt to narrow the pricing in favor of the vendor first and foremost is not being done to help the reader. It's a form of manipulation designed to lull you in with while undercutting the other guy, a ruthless tactic meant to undermine both the competition and the consumer alike:

This whole On the Waterfront approach to business is not my style and I'm willing to bet that it's not the preferred one for many of you out there either. Yes, I did place a pre-order for California(which sounds like an interesting book and I'll talk more about it during my July/August book preview post later this month) through Powell's but there are dozens of other online and off book sellers that you can place an advance order with and not only for Hachette titles. It's a matter of choice and if you feel strongly about this issue, this is an option that you can take to show the power of your purse strings.

For a more pleasant side of the book world, let me share with you a couple of my Jane Austen related reads of late. Robert Rodi's look at the snarky side of our dear Jane has the eye brow raising title Bitch in a Bonnet but the subtitle  explains his true point of view "reclaiming Jane Austen from the Stiffs,Snobs, Saps..."etc.

Rodi feels that many people are mistaken about the true romantic nature of her work and offers a running chapter-by-chapter commentary on her novels, starting in Volume one with S&S, P&P and Mansfield Park. A second volume that encompasses Emma, NA and Persuasion is currently available as well.

Having Rodi discuss the plotting and amusing traits of such well known characters like Caroline Bingley or Marianne Dashwood in a fun, almost gossipy way is a real blast for an Austen fan with a modern sense of humor:

For the Austenesque reader, you might like this series by Mary Jane Hathaway called Jane Takes the South. The first book,Pride,Prejudice and Cheese Grits was a self published title that is now being reissued via Howard Books along with two other titles forthcoming very soon.

PP&CG takes place at a college, where two Civil War historians are waging a small war of their own, due to a negative book review, as well as fighting their own growing feelings towards each other. I've been reading the e-book edition so far and it's a charming retake on the classic story and have even gotten the e-book version of her next title Emma, Mr. Knightley and Chili Slaw Dogs on my Nook as well!

The one title that I'm really looking forward to is Persuasion,Captain Wentworth and Cracklin' Cornbread where the heroine is named Lucy Crawford( intriguing name combination there!) who is trying to save her family home by turning it into a free medical clinic where one of the doctors happens to be a former love of hers.

That one is due out in November and I may get the print edition, as the cover art for these books are hard to resist( I know you're not supposed to judge and all of that but a pretty cover doesn't hurt either).

In the meantime, I'll enjoy the sweet southern romance of Pride, Prejudice and Cheese Grits as part of my summer time literary vacation. Lizzie and Darcy in any form are worth the prolonged pleasure: