Another main character bit the dust on True Blood this week, as Alcide was shot through the heart during a rescue attempt for the botched bait plan that Sookie and Bill dreamed up to find their missing friends.

Seriously,people-get to Fangtasia already! Isn't it fairly obvious by now where the horde of Hep V vamps are hanging out and storing their portable meals? *sigh* Poor Alcide; Sookie was right when she told Bill that her love for him wasn't as strong as hers,which made his passing all the more bittersweet to bear:

As much as you're expecting a good sized body count for the final season(so long, Mrs. Fortenberry,see you Under The Dome!), it was a shame that Alcide didn't get to do much more here. Then again, he got more time than Tara and yes, still not completely over that!

Anyway, from the promo for the next episode, it does look as if someone finally realized that Fangtasia might be a good place to check for those pesky Hep V vampires. Hopefully, the rescue squad gets there in time to actually save somebody,geez!:

On Food Network Star, the contenders had to get very commercial  as their challenge was to create a product for marketing,including a 30 second spot to be filmed.

Their ads were done before a green screen with the catch being that they had to use a randomly assigned background. That threw off some folks like Lenny(The Great Wall of China overwhelmed him a bit) and Emma,whose French persona in Paris came across like a bad Pepe Le Pew cartoon.

Chris,however, had a good product idea with flavored butter coins and pulled his Indiana Jones style promo off well enough to earn a win for Best Concept. Loreal won the challenge by using her natural wackiness for the giant tomato farm setting she was given(plus, naming her sauce DANG! was cute and catchy). Reuben was sent packing for fumbling his moon landing presentation-dude, all you had to say was "The flavor(of my sauce) is out of this world!" to at least stick around a little longer. Such an easy A,seriously.

Well, next week the remaining contestants head to Vegas and find out who survived Star Salvation. Maybe they'll see Reuben again, maybe not: 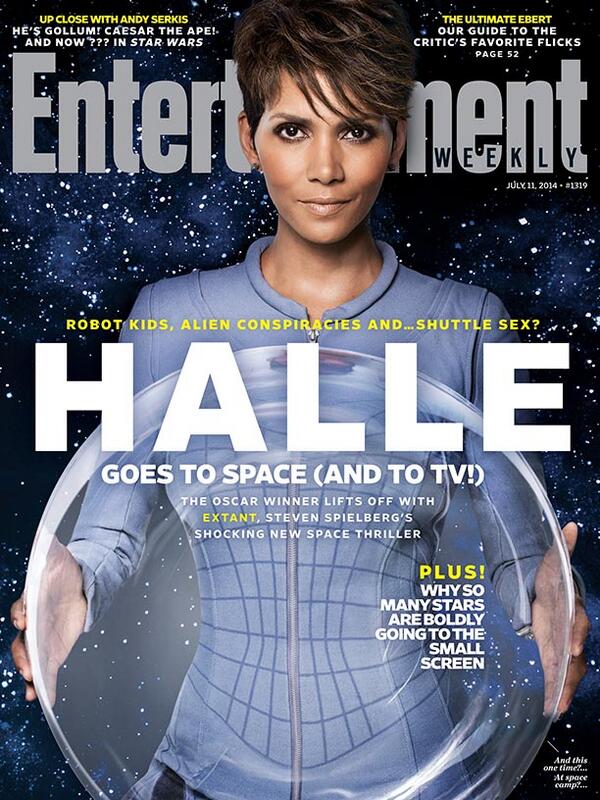 Another sci-fi centered show appeared on the CBS summer line-up this week and it's debut is rather promising. Extant stars Halle Berry as Molly Wood, an astronaut in a not too distant future who has just returned home after a year long solo mission in space.

As she is adjusting to being back on Earth,not to mention home and work, a shocking surprise turns up in her blood work;Molly is pregnant. Due to her isolation and infertility, the only possible answer to how this happened lies with a 13 hour time lapse on board the ship during a solar flare incident.

Molly is determined to keep a lid on this strange new development from both her superiors at work and her husband,who is busy trying to get his new line of empathic robots(the prototype he has been raising as his son) the funding to expand further. So far, there are a good number of plot balls being juggled in the air but the cast and writers seem to have a good grip on them for now. I'm going to keep up with Extant and hope that the signs of intelligence that are flashing here stay steady and strong:

UNDER THE DOME: With his near death experience, Big Jim appears to have turned a new leaf and is actually cooperating with his former enemies.  I don't think that will last long but it should be interesting to see how much of  the "New Big Jim" we and the rest of Chester's Mill can all take: