Despite it's official publication date of 1818, many consider 2016 to be the official 200th anniversary of Mary Shelley's Frankenstein due to the fact that she begun writing this now classic tale of terror in the summer of 1816.

Well, that's a good enough of a starting point, I guess and since this story is all about unusual creations and how to handle them, I thought that the best way to celebrate this literary milestone was to take a gander at some of the more unusual reinventions of both the doctor and his monster.

Frankenstein has had many reincarnations over the decades, ranging from breakfast cereals to cartoon characters, and often getting confused with his own creator. Here, I will try to showcase them separate and highlight the most interesting aspects of this doomed pair in pop culture lore: 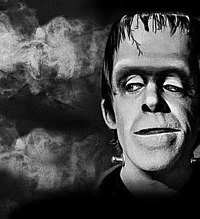 HERMAN MUNSTER: Having Frankenstein's creation become a bumbling sitcom dad was a near stroke of genius, as many of the film versions did have a sympathetic view of the creature.

To some, The Munsters was simply a middle class version of The Addams Family but I would so prefer to hang out at 1313 Mockingbird Lane. For one thing, the whole family was loyal and lovable to each other,unlike the lethal sibling rivalry over at the Addams residence.

The heart and simple soul of the family,not to mention a few other borrowed body parts, belongs to Herman. His well meaning manner and moments of naivety made up for his occasional grumpiness and Fred Gywnne really made his mark upon the role. A perfect combination of character and actor makes this take on Frankenstein's creation one of the most beloved and admired in TV history: 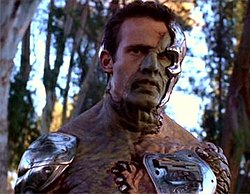 ADAM: Since the fourth season of Buffy the Vampire Slayer took place in college, it did make sense that the Big Bad for that run turned out to be a Frankenstein like foe.

The human/demon hybrid known as Adam(played by George Hertzberg) was meant to be the template for a secret government project to mass produce an army of super soldiers. However, it was inevitable that the creation broke free of his creators and as is the way of these things, decided to become the master of his own destiny,complete with a makeshift army of his own design.

Ironically enough, Buffy had to resort to magic in order to become a hybrid warrior woman in order to defeat him. While a few fans were never thrilled with this season, I found Adam to be an interesting villain that should have been better developed there. Nonetheless, he did have quite the spectacular showdown scene towards the end of that story arch:

FRANKENSTEIN,MD: Getting back to the not-so-good doctor, this web series did take a darkly humorous approach to the story at first. Seeing the scarily ruthless ambition of Victoria Frankenstein (Anna Lore)at the expense of her assistant Iggy(and later, a few friends) was a good way to jump start this post modern adaptation.

The fear factor did kick in as the show went on,particularly as Victoria got quickly over her head with her reanimation project which lead to the unavoidable tragic results. Yet, the early dark humor helped to humanize our leading lady as well as get a few actual science facts blended into the story telling mix:

DR. FRANK N FURTER: Using dark comedy for any retelling of Frankenstein is only one of the elements of the cult classic film The Rocky Horror Picture Show, which mocked oh so many pop culture standards.

Granted the Frankenstein thread is a slim one in this particular crazy quilt but Tim Curry's performance as the mad and scantily clad doctor stands out like a splash of red on a little black dress. In this version, the doctor is far more developed as a character than his hulking he-man of a creature and is seen as an anti-hero of sorts. Dr. Frank N Furter was well ahead of the times, in more ways than one:


I'm glad to see that Frankenstein's legacy is alive and well and hopefully will remain so for centuries to come. No matter how or how well you tell a good story, it will always find fresh ears and voices to keep it's quality and style feel brand new: