Another mediocre Mansfield Park fails to showcase our dear Fanny

The best thing that I can say about last night's PBS showing of Mansfield Park is that it is not as bad as the 1999 Hollywood film version(which is not high praise at all).

This latest take on Jane Austen's most talked about novel doesn't err by adding in elements that have no bearing on the true points of the plot(Sir Thomas as a cruel slave owner,Lady Bertram being an opium addict,eldest son Tom a drunken lout)but instead,screws up by compressing the various threads of the story into a flattened pancake of a plot that apparently only had enough money in the budget to afford one setting place.

An important part of the story has impoverished cousin Fanny being sent back to her family's ramshackle house in Portsmouth,to remind her of the benefits of living at Mansfield(and changing her mind about turning down Henry Crawford's marriage proposal).

However,in this version,Fanny is merely left behind at Mansfield all by herself while the Bertrams go off to visit their grandmother(who,in the book,is probably in her grave). What kind of punishment is that? Gee,can I have an entire manor house to myself if I refuse to marry the first gigolo that comes along? Sounds like a good deal to me!

That's not the only flaw here,I'm sad to say. A number of minor characters are removed,forcing some of the harsher lines into the mouths of those who would not say such things(aloud,anyway)and a major villianess,the dreaded Aunt Norris,is vastly underplayed. Also,an important ball becomes a picnic for no reason that makes any sense and even tho the Lover's Vows portion of the story is not as sleazy as shown in the Rozema film,it is not as amusing and subtly character revealing as it could be:

The real heart of the problem is in how Fanny Price is portrayed. Billie Piper is completely miscast in the role,for which I do not blame her. It seems to me that,except for the mid-eighties BBC miniseries, anyone who adapts Mansfield Park seems to feel that Fanny must be given a makeover in order for an audience to accept her as the heroine of the piece.

I think many of them wish that Mary Crawford was the leading lady here(even Gillian Anderson's intro spent more time talking about Mary than Fanny!)since she's the ideal sort of witty and forward sort of gal who attracts the fellas more easily that a quiet,thoughtful girl like Fanny.

The Fanny that is shown here spends alot of time running around,playing games and being rather lively. This is not the delicate "creepmouse" that Jane Austen created on the page,who may not be the life of the party but has the inner strength of her convictions and the willingness to follow thru on them which her more well to do cousins are sorely lacking in their characters. Maybe if more feminine role models like that were highlighted in the media,we would have less of the Paris Hiltons and Lindsay Lohans for young women to admire. 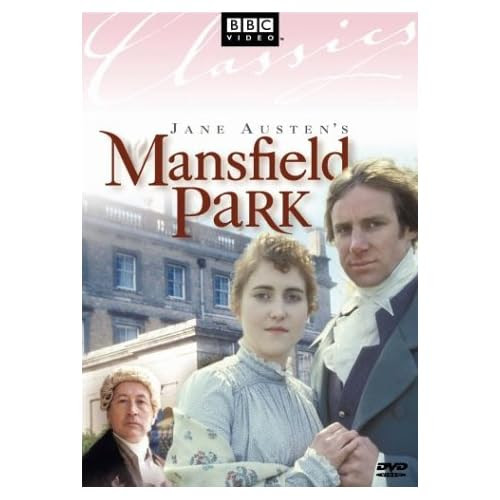 Thank goodness that there is one decent version of Mansfield Park on film. The 1986 miniseries is not perfect(the hairstyles alone proclaim that)but it is a sterling and faithful adaptation of the book.

Yes,it's main advantage is in being given plenty of time to fully expand the subplots and develop the characters(very much like the lauded P&P miniseries which revived Austenmania)but it also is not afraid of letting the true Fanny Price be seen,in all of her girl geek glory. If you haven't seen this one,it is a must-watch for any Austen fan. It was newly released on DVD over a year ago and should be rentable thru any online dealer. Do watch it,do!

Next Sunday,a biopic of Jane Austen,entitled Miss Austen Regrets,will be shown. Since it focuses on Jane's love life,or the lack thereof,it will be no doubt compared to the recent silver screen JA bio,Becoming Jane.

This version appears to have a much older Jane(played by Olivia Williams,who has also played an Austen character in the Andrew Davies's adaptation of Emma that will be shown later on in the Complete Jane Austen series)than the Hathaway film,so it may be less fanciful and more informative regarding Austen's affairs of the heart. That would be good to see:

Dang! And I've really been looking forward to watching the tape!

I will still, of course, but I wish these adaptations were perfect.

Ask for the impossible much?

Great review and good points. Knowing how many important scenes were cut out,I wonder why they didn't make Part I and Part II.
I lambasted this adaptation in my serious Jane Austen's World blog, but on Jane Austen Today, 50% of the voters loved or like the flick. Go figure.

I know how you feel,Robin,but see it just for a laugh(that's what I do when I watch NA1). I'm holding out hope for the new version of S&S,which was adapted by Andrew Davies(a pity he didn't to work on MP!).

Thank you,Ms. Place and yes,it would've been much better if MP had been made into a two parter. The new Sense & Sensibility movie that I just mentioned is in two parts. It can be done!

I have to agree with you. I was very disspointed in both new ones. I sure hope they can do a good job someday. Maybe A&E will step in?

Perhaps the next adaptation of "MANSFIELD PARK" should portray Fanny as a "heroine". Instead, it should point out Fanny's flaws, while she is passing judgment on the flaws of the other characters . . . and show that she had failed to develop like the others.