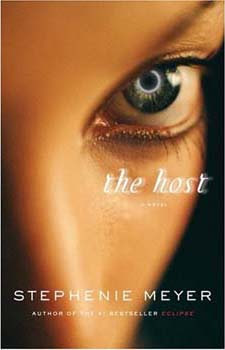 In Stephenie Meyer's upcoming novel,The Host,Earth has been seemingly conquered by an alien race who called themselves "souls" that must use human bodies to live and function.

The Souls have taken over many other worlds with a variety of different life forms to adapt themselves to,but none that have been quite as resilient as the residents of Earth. Nonetheless,they have successfully managed to take over,using Seekers to continue the hunt for any humans still not yet brought into the fold.

Into this new regime comes Wanderer,who has just been implanted into the mind of Melanie Stryder,a recently captured human who may have been trying to meet up with a few of the last unclaimed people on the planet.

Wanderer earned her name by living on a number of different worlds but never claiming one as home. Her transition into this new world is even more difficult due to Melanie's refusal to be suppressed by her own personal alien invader,a struggle that Wanderer is determined to hide.

During the early days of their co-existence,Wanderer is privy to Melanie's memories of her past and eventually starts to share some of Melanie's emotions and concerns over two people she was forced to leave behind,her younger brother Jamie and her boyfriend Jared,a man whom she encountered and fell in love with while hiding out from the Souls.

Melanie's love for Jared drives both her and Wanderer to strike on her own to see if he and Jamie managed to find her Uncle Jeb,who may have a secret hiding place in the desert. Wanderer is also partially motivated by the need to avoid her Seeker(who is overly determined to track down any resisting humans left)but her desire to find Jared becomes as great as Melanie's to see him again:

The two of them do find Jared,who is furious about what has happened to Melanie,and Jamie,who is happy to have her back in his life and curious about Wanderer. Turns out that Uncle Jeb has set up a small community of humans who live in underground caves,most of whom are just as upset about having one of the enemy living amongst them.

Jeb and a few others,however,suspect that Melanie is still present in her body and are determined to give them a chance. Wanderer eventually becomes known as Wanda and during her stay,slowly comes to bond more with the humans around her than she ever did with her own people. She and Melanie still share strong feelings for Jared,which brings about some jealousy and a few other complications into the mix. Both women must come to terms with who they are and how each one can make life better for the other.

Meyer is best known for her Twilight series aimed at teens,but her leap towards two different genres(adult and science fiction)is gracefully done and she also perseveres one of her strongest skills from her earlier writing-the knack for compelling storytelling. The Host is a classic stay up all night to finish read,with vivid characters that grow and change over the course of the story,both human and alien alike.

Some sci-fi fans may not warm up to this book at first,since it lacks a good deal of techno-talk and gadgetry. To me,that is not a hindrance(then again,I'm only moderately into sci-fi)and it really shouldn't be for any reader who wants to take an imaginative flight of fancy. The driving force of the novel is the connections made between people and of two different races at odds with one another who come to see the good in each other,a rather universal theme for any genre.

The Host will be released on May 6,and this is definitely one worth a pre-order. I will be reminding folks to check it out in my May/June preview(some fans out there will be lining up for their copies days in advance,I expect)and hope that it gains more of an audience for Stephenie Meyer,who is well on her way to becoming a major player in the literary world,in my opinion.

And yes,The Host is a love story but not just a romantic one. The various love triangles are intriguing and touching but it's the almost maternal love that Wanderer develops for humankind that is the sweetest and the strongest gift that the book gives the reader. Truly an embarrassment of riches for all book lovers to enjoy: