Getting settled into a new year of reading can be daunting at first but it does help to take up a regular routine or two to start your bookish engines there.

Having been away from my local library during the holidays, it was wonderful to make my first visit of 2020 this past weekend with at least one book to return(which lead to another loan, that I'll get to momentarily).

What made this trip special was the joy of discovering a new book on the shelf that I've been wanting to check out ever since I first heard about it. The Vanished Bride by Bella Ellis has the literary sisters Bronte find themselves  becoming a trio of sleuths as news of a strange death and disappearance at a nearby estate peaks their considerable interest.

With the assistance of their brother Bramwell, Emily, Anne and Charlotte look into what happened at Chester Grange, where the second wife of Robert Chester is missing with only a blood stained bed to suggest a gruesome departure. From hearing the eyewitness account of Matilda French, the current governess of the household and old school friend of sisters Emily and Charlotte, the sisters feel that they have no choice but to use their considerable skills of observation to find out the truth.

This leads them on a search that entails conducting interviews in disguise, finding clues in unlikely places and discovering hidden rooms within the manor house itself. Can the Bronte sisters solve this mysterious situation before another dire event takes place?

This book is intended to be the first in a mystery series and I certainly like this premise. Granted, out of the three Brontes, I'm more of a Charlotte person yet it ought to be entertaining and enlightening to see all of them in crime fighting action here: 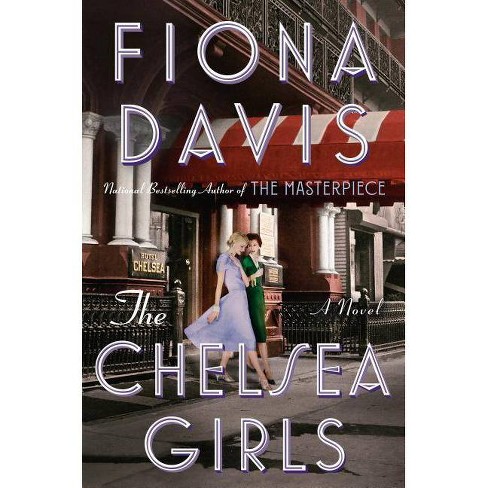 During my last library visit, I decided to try a novel by Fiona Davis entitled The Address and it was such an engrossing read that upon my return, I went in search of another one of her works of historical fiction.

Luckily for me, The Chelsea Girls was readily available and quickly added to my pile of  new must reads. The story takes place in New York during the mid-1950s as two ladies of the theater reunite at the title hotel.

Hazel and Maxine became friends during WWII as USO performers on tour to entertain the troops. Now, five years later, they hope to combine Hazel's talent for play-writing and directing with the star power that Maxine has been generating on the Broadway stage to mark their mutual paths to fame and glory.

Unfortunately, their dreams are threatened by official demands to testify about "Un-American activities" as the McCarthy blacklist era begins. Can Hazel and Maxine stay true to their bonds of friendships as well as their professional goals, despite the pressure building from all sides?

This sounds intensely intriguing and I won't be surprised to see a few modern day parallels in this tale of attempted repression of artistic women:

To round out my library loan picks, I went with another debut mystery novel that is starting off a fresh new series and from the looks of it, this is one that I'm definitely going to like.

Marty Wingate's The Bodies in the Library is set in Bath, England as new  curator of The First Edition Society, Hayley Burke, discovers that the world of books is not as safe as one would think.

In addition to not having read any of the classic mystery titles in the collection that she's in charge of, Hayley also has to deal with a cranky co-worker and a local fan fiction writers' group that she has allowed to use the FES quarters who keep fighting among themselves about the proper way to add vampires or zombies to the works of Agatha Christie.

When the group leader is found dead one morning in the FES library, Hayley finds inspiration from Agatha Christie's The Body in the Library to find the killer before things get more out of hand. While she may not be a Miss Marple, Hayley may turn out to be a true detective in the making. I'm already reading this book and it's quite the Christie inspired cup of tea indeed:

When I arrived home, laden with books, there was a nice surprise in my mailbox from LibraryThing. LT does a monthly giveaway of upcoming titles and I won a copy of Little Wonders by Kate Rorick, best known for the Diary of Lizzie Bennet webseries tie-in novels.

When determined super mom Quinn Barrett unleashes her anger at her pre-school age son for not wanting to wear the homemade Halloween costume she created for him in public, she never expected that meltdown to become a viral sensation.

Newcomer Daisy Stone took the video but only meant to share it with her best friend back in California as a private joke. Instead, that slip of Quinn's perfect persona mask has taken on an internet life of it's own, making the once envied suburban diva the talk of the town.

While Daisy's unconventional ways make her reluctant to admit her part in this slow moving mess, she can't help but to reach out to Quinn, who's struggling to regain what sense of self she has left. This take on modern motherhood seems to be mixed with humor and heartbreak yet with a strong dose of unlikely friendship that should make for a solid good read. The book is due out in March and I think it'll be one to watch out for there.

Well, I do have quite a bit of reading on my hands, with the Winter's Respite readathon(reading two books at once for that one!), plus my Series-ous Reading and preparing for a review of Sanditon next week. No rest for the page turning wicked there!

Considering the cold weather on the way and the current news headlines, I think that a good book or two or more is the right choice for my entertainment needs(especially after the disappointing Oscar nominations, which I'll discuss later on) at this time.

For the moment, my first of many library hauls this year is off to a good start and the biggest decision on that score is long book or short book? At least that's a fun choice to make!: