Spending my summer in the shade of a good book 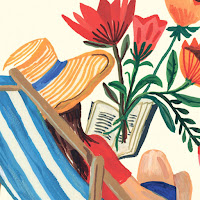 We're starting our first big holiday weekend of the summer and while some might be considering an outdoor adventure in the midst of what still is a major health crisis, I know that I'm not alone in planning on enjoying this occasion safely inside.

Part of my fun will be with books, which are a major player in my summer games, and while I have one readathon on deck next month(Sci-Fi Summer), the rest of the season is wide open, so to speak.

Granted, my TBR cup is overflowing at this point but this list of summer reads is short and savvy, I hope. Let me just showcase the top three titles on my pile of fun away from the sun reads:

NEXT YEAR IN HAVANA: Chanel Cleeton's acclaimed novel has two leading ladies, one from the past and the other dealing with the present.

The former is Elisa, who along with her sisters, was seen as a "sugar queen" in their elite social circles in Cuba of 1958. Sheltered from the harsh realities of everyday life and the revolution rumbling to life all around her, Elisa meets Pablo, a young man who opens her eyes as well as her heart.

Decades later, her American born granddaughter Marisol is visiting Cuba with a special item on hand, determined to honor the memory of the most influential woman in her life.

There, she also discovers her grandmother's past while meeting Luis, the grandson of a family friend that could help her ignite a passion similar to the one Elisa shared with Pablo back in the day. Will learning about Elisa's past help Marisol figure out her own future?

I've heard so many wonderful things about this book(and yes, I do like Reese Witherspoon's book club picks) and this sounds like a riveting read for any time of year:


THE GREAT ALONE: Author Kristen Hannah introduces you to Leni, who at age thirteen knows all too well about impulsive and self destructive behavior, due to the turmoil in her own household.

When her father Ernt decides to take their family off to Alaska in 1974 to claim land left to him by a deceased Army buddy from his time in Vietnam, Leni hopes that this will lead to a better life for all of them.

The rough conditions of their new home,along with the total lack of preparations made, takes an even harsher toll on Leni and her mother Cora. With Ernt being unable to handle such isolation, both mother and daughter find solace and support among their new neighbors.

Despite Ernt getting some work along the new pipeline that's being built, that time away from Cora and Leni does little to ease the tensions. While she struggles to find new friends and perhaps love, Leni has no choice at one point but to think of her own emotional survival.

At the moment, I'm reading an earlier book from this author, Firefly Lane(which is being adapted for Netflix,) and that novel is so engagingly good that it's beyond awesome to have another one of Hannah's books on hand. This is the first time that I have read her work and clearly, I've found a great author to catch up on here:

THE MASTERPIECE: Writer Fiona Davis centers most of her historical fiction in and around New York City, with this story truly being at the heart of many points of the famed metropolis.

Grand Central Station is the connection between two women from different moments in time. Clara Darden is both an artist and a teacher at the Grand Central School of Art in 1928, gaining some attention for her work but not all of the extra notice is seen as respectable.

In 1974,  Virginia Clay,a new employee at Grand Central's information booth, discovers a painting in the now abandoned art institute that appears to have been one of Clara's, who vanished long ago.

With an auction at Sotheby's that has a similar work up for sale, Virginia is determined to find Clara and let her know how valued her art has become. This search brings her some clarity to the troubles in her own life, battling illness and then dealing with a painful divorce, as well as helping to solve more than one mystery regarding Clara's life and times.

I so enjoy Davis' skillful blend of well developed female characters and finely crafted pieces of historical interest. She has a new book coming out this summer(The Lions of Fifth Avenue) and until I get to it, this intriguing novel should do nicely. I also love the cover art of her novels, although I know good and well that you can't judge a book by it's cover(in this case,however, you can!):


I hope everyone has a good Memorial Day weekend and finds plenty of fun even at home during these times. Good books help a lot, not to mention a little binge watching and/or re-watching  of tried and true favorites.

Speaking of favorites, I'm taking a bit of a breather from catching up with the classics and doing a reread of Jane Austen's classic six novels. I'm starting with Emma(yes, due to the new movie) and hoping to tackle Sense & Sensibility before Labor Day is upon us.

While I do know these books fairly well, there is value in revisiting them and it's been some time since Austen's original works were on my reading radar. At the very least, I hope to feel like a truly accomplished woman by the turn of that last page: