It should be a truth universally acknowledged that when the birthday of a beloved author happens to coincide with the anniversary of an adaptation of one of her most popular works, both occasions must be combined for a true celebration.

As this year marks the 245th birthday of Jane Austen as well as the fifteenth anniversary of the most recent big screen version of Pride & Prejudice, I decided to treat myself to a rewatch of the 2005 film. After all, I am in the midst of a reread of the book, so seeing this movie again felt like I was completing a full circle.

While I do find the 1995 BBC miniseries to be the best book-to-screen version of this novel, there are some merits to this cinematic rendition. Granted, it doesn't have everything that a Jane Austen reader would want yet there is something to be said for what the film does have in abundance.

For one, Keira Knightley gives an excellant performance as Elizabeth Bennet(frankly, I never understood the objections to her being cast in this role).

She not only connects well with her sisterly co-stars(particularly Rosemund Pike as Jane Bennet, a far cry from her future Gone Girl leading lady) and other talented stars such as Dame Judi Dench's Lady Catherine, Brenda Blethyn as a delightfully ditzy Mrs. Bennet and Donald Sutherland as a laid back Mr. Bennet, Knightley fully embodies the energy and lively spirit of the character.

Even in a scene with the dutifully dull Mr. Collins, who admires the boiled potatoes at dinner with about as much zeal as he does the marriageable merits of the Bennet girls to become his wife, Knightley's Elizabeth shares a bit of dialogue with her father that subtly mocks their obnoxious guest without missing a beat. It's smoothly done without her drawing too much attention to herself but she does sparkle in that moment nonetheless: 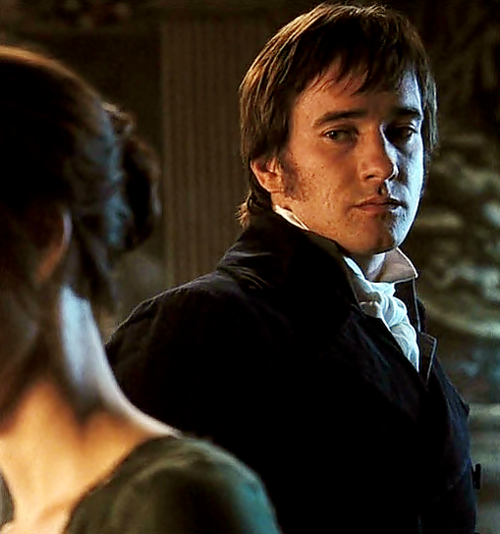 Knightley also has great chemistry with her major co-star, Matthew Macfadyen as Mr. Darcy. The two of them create enough romantic tension to cause the air around them to crackle with emotional electricity(maybe that's why Darcy flexs his hand so much here!).

Macfadyen's take on Darcy is decidedly moody,which I'll get into in a moment, yet he is more than capable of bringing the right amount of intensity when needed.

Both of these actors were at the time following in the footsteps of legendary stars such as Greer Garson, Laurence Olivier ,David Rintoul and Elizabeth Garvie, not to mention the iconic Jennifer Ehle and Colin Firth. Taking on such roles is not easy for any actor, especially if there is a fan base already out to judge you beforehand.

However, this onscreen duo give their audience a set of striking performances that is well chorographed as any Regency ball dance arrangement:

This is a very visual movie, as director Joe Wright displays his full powers behind the camera with beautifully vivid scenes that highlight just how crowded the Netherfield and Meryton balls were, along with Elizabeth's inner turmoil upon reading Darcy's letter and later her joyof the outdoors with her Aunt and Uncle Gardiner.

Such choices were made to attract a younger generation, which is not a wholy bad notion. In order to keep a classic alive, new admirers must be  shown that these stories can fit well into their lives and while some shortcuts were taken to achieve that, the overall themes of the story are still intact.

Yes, some of those scenes do have a touch of Bronte rather than Austen at times. To some, Darcy is too withdrawn and more like Heathcliff on the moors towards the end. I find that influence to be only a touch at best and besides, given that Jane Austen did enjoy a Gothic romance or two in her day, she might actually find this approach amusing.

Also, that early morning arrival of Darcy in the mist is rather gorgeous and one that I would not give up viewing more than once:

So, does this version of Pride & Prejudice hold up well, fifteen years later? My answer is yes and particularly for those who find such period dramas to be "British comas"(as my younger sister often calls my favorite genre), this may change a few hearts and minds.

With that, I wish Our Dear Jane a very happy birthday and a happy anniversary to 2005's P&P adaptation. Even though it may not please everyone, pictures of perfection can make one sick of seeing them and we never want that to happen to Elizabeth and Darcy!

The best thing about any adaptation is that it encourages people to take up the original book and walk into a special realm of delights. In this case, that goal was completely achieved: