My Series-ous Reading start to the fall season brought me back to Lake Eden for a slice of Blackberry Pie Murder, the next in line for me in the Hannah Swenson series by Joanne Fluke.
This time out, Hannah is doing well at work but trying to plan her mother’s wedding to Doc Knight(who is a real sweetheart, I must say)is becoming a full time job.
The constant changes of plans, from food to flowers to bridesmaids dresses, is making more folks than Hannah frustrated but it’s she who is bearing the bridezilla brunt of it. Some of that tension may have been in play one morning as Hannah takes Lisa, her partner at the Cookie Jar bakery, to work during a thunderstorm storm.
The hectic road conditions and lightning strike that brings down a tree in their path leads to Hannah’s car hitting and killing a stranger. The man was truly a stranger with no one recognizing him at all. One of the few clues to be found on him was traces of blackberry pie on his shirtfront:
Despite this being an obvious accident, Hannah is charged with homicide and arrested by  the sheriff who is also her brother in law Bill(which ticks her sister Andrea off to no end!) since police detective  Mike, one of Hannah’s occasional boyfriends, refuses to do so.
I have to say that Mike generally annoys me most of the time but here, he does right. He not only refuses to arrest Hannah but takes an unpaid suspension as well based on principle. Norman, the other half of this love triangle, is on hand for emotional support and bail to get Hannah released before her arraignment, equaling things as usual. 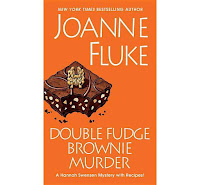 Hannah being in jail is an interesting change of pace, although her time spent in a cell over the weekend isn’t too daunting.
Plenty of folks bring care packages over to her and she doesn’t have to share space with anyone. It’s kind of a sitcom style of legal trouble which you know will work out in the end(or the next book in this case) but still a good bit of character development nonetheless:

The mystery here is who is the victim, which  gets into a rather elaborate plot that involves a returned runaway girl and a pimp with a diamond in his tooth(hey, Norman needed to use his dentistry expertise somehow here!), which is a little over the top but still entertaining.
At the very least, this book got me jumping right
into the next Hannah Swenson story, Double Fudge Brownie Murder, that I will be reading on my regular time. Yet, it will tie into the last book for this Culinary Cozy Feast challenge so stay tuned!
Meanwhile, I did see the new Hallmark Channel adaptation in what is now called the Hannah Swenson Mysteries (instead of Murder She Baked) entitled Sweet Revenge over the summer. Loosely based on Cream Puff Murder, it’s not as lively as the earlier movies and while some of the new additions to the series were fun(Hannah’s younger sister Michelle gets her onscreen  debut!) , others were odd to say the least like Norman getting a dog?
Sorry but I adore the mini subplot of Hannah’s cat Moishe palling around with Norman’s kitty Cuddles  over the course of the books and hate to see that altered.
Then again, it’s not too practical to have relay racing cats in a made for TV movie, which is in it’s own cinematic universe anyway. Having Hannah Swenson back on the small screen is a welcome  enough treat as it is:

Well, onto the current Series-ous Reading selection and this title is truly irresistible; Mocha, She Wrote by Ellie Alexander.
This latest entry in The Bakeshop Mystery series focuses on Andy, the beloved barista of Torte who is entering a major coffee competition for the first time.
While Andy has the skills to win big, one of the judges already wants to whittle him down to size and when that unpleasant fellow is found dead with one of Andy’s drinks in hand, Juliet is determined to prove his innocence. Can she show that Andy is good to the last drop or will his future be grounded up for good?
I’m not a coffee person but do appreciate the love of the morning brew and so far, this book is best part of waking up for more good reading:
Posted by lady t at 4:32 PM