Live and learn about Evolution,Me & Other Freaks Of Nature 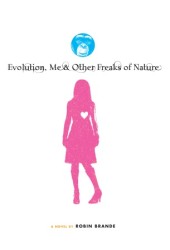 Mena Reece is having a harder time starting high school than most kids,due to being kicked out of her church and shunned by her former friends for unintentionally exposing the truth about what they did to another classmate. Her parents are furious with her as well,giving Mena the cold shoulder at home. The only bright spot in her school day is science class,where Ms. Shepard,a brilliant and challenging teacher,gets Mena hooked on a subject that was usually dull as dishwater to her.

Mena is made lab partners with Casey Connor,a smart and quick witted guy,who is a true science whiz and has no idea why Mena keeps getting hassled by her fellow classmates who form a protest group against Ms. Shepard when she begins teaching a unit on evolution in class.

The kids,known as The Back Turners,are encouraged by their local minister,Pastor Wells(who even gets to make a statement in front of the class,against Ms. Shepard's wishes),who insists on intelligent design,aka Creationism,being taught side by side with Darwin. Ms. Shepard would rather teach the facts about science and encourage her students to think for themselves, which is a concept that makes Mena nervous but curious as well. Her friendship with Casey and his family is kept in cloak and dagger style since her parents wouldn't approve of her being friends with a boy,especially one who is into Lord of The Rings movies.

Mena winds up getting involved in the evolution debate secretly,thanks to Casey's sister Kayla who writes for the newspaper and has Mena set up a blog that mixes religion with science called BibleGrrrl.com. As Mena's feelings, not only about evolution but her relationship with Casey as well,start to stretch out beyond her limits,there are some tough choices and revealations that she has to make.

This is Robin Brande's first novel for young adults and her depiction of a religiously inclined teenage world is skillfully portraited without stereotyping or over the top dramatics. Both science and religion are given respect and praise,even by the very teacher who wants to give her students the full facts on evolution. An open minded view that suggests that you can accept Darwin and Jesus without one canceling out the other is presented and frankly,that's a viewpoint which should be included in adult discussions on this subject,too.

Evolution,Me & Other Freaks of Nature will be out this August at bookstores everywhere and please do check out her blog(which is linked in my sidebar)for more info,plus she has quite alot of funny,interesting things to say on a daily basis. You can also check out the BibleGrrrl site created for the book by clicking the title link above. This book should be a hot topic upon it's release but the story and characters are just as engaging and entertaining as any others you'll encounter in teen fiction. Perhaps even more so than the rest.


Robin's the one who first told me about the documentary Jesus Camp(that I just recieved from Netflix and will be reviewing later this week)which gives you a glimpse into the diehard Christian right and how they're training kids to be "warriors for God". When I was reading EM&OFON,another movie came to my mind,Saved!,which stars Jena Malone,Mandy Moore and Malculay Culkin as teens in a Christian high school dealing with the realities of life.

Evolution is not a key part of Saved!,but it's a good companion piece to Robin's book,atleast until there's a movie adaptation of it,hopefully soon. Evolution,Me & Other Freaks of Nature not only shows how Mena grows as a person but lets her keep true to what she believes in her heart to be right. A good lesson for anyone at any age.
Posted by lady t at 10:45 AM

Thanks, Lady T. I'm so glad you liked it.

And I agree with you about Saved!. Fun film, lots of similarities.

You're welcome,Robin. It was my pleasure:)