After visiting Hostel Part II,it's a relief to be Knocked Up

I just got back from one of my local multiplexes after viewing one of the oddest double features in a long while: Hostel,Part II and Knocked Up. Yup,two great tastes that taste weird together,like peanut butter and sushi."But Lady T,you said that you weren't going to see Hostel II!",some of you are exclaiming at this moment. Let me explain. My younger sister INSISTED that I go to Hostel II with her and she threw me a bone by offering Knocked Up as well. Since we both wanted to see Knocked Up(a movie that I had some early doubts on) and to keep the domestic peace,I gave in. Never underestimate the persuasive powers of younger siblings,folks. 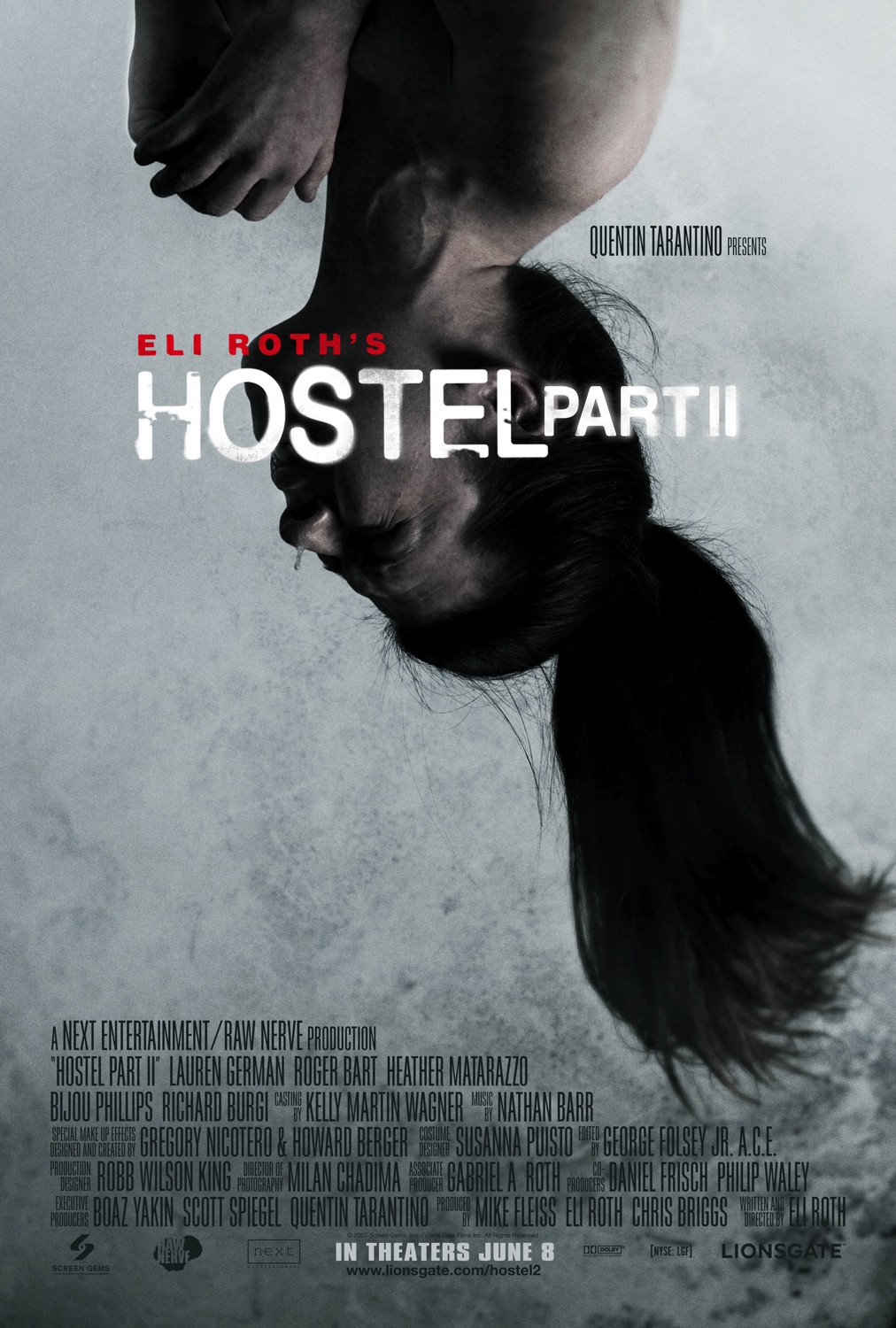 So,how was Hostel 2? Not as grueling as I expected but not as intense as the first film by far. This time out,the script adds a little depth by giving the audience more info on the sinister Hunting Club that sets up young and gulliable tourists to be auctioned off to wealthy clients looking to enjoy some private slice and dice.

While the actors give it a game go and you want to see these gals be spared the horror that awaits them,it's all too easy to play connect the dots with the plot. I could tell who was going to live,die and get their comeuppence within the first hour. The budget for Hostel II was clearly bigger than the one for the original and some of that sleekness carries over to the whole story. Check out this pursuit scene and see if you agree that it would fit into just about any other big studio scare flick(don't worry,it's not bloody,I promise):

I saw the first Hostel on DVD and one of it's strengths was the raw gritty nature of both the story and the setting. Nothing wrong with giving Eli Roth some more cash to work with,but I felt very disconnected to this film and the characters. Atleast with the first one,there was this wild unpredictablity,a Joe Bob Briggs'"Anyone can die at anytime" vibe going on which jacks up the viewer and had you rooting for the poor suckers to escape. Here,the only time I had any tension while watching this movie was a rather disturbing scene where a band of robber children were being menanced with a gun being pointed at them one by one. This was done to set up another payback moment later on,but it left a sour taste in my mouth.

There is some nasty stuff that does happen to people,but again,in such a polished stylized way that it was more like watching a music video than spying a real nightmare in progress. I'm sure this movie will do very well and probaly bring us a Hostel 3 by this time next year(or sooner)but by then,I will take a firmer stand and really mean it when I just say no. Fans of the first film won't be disappointed but compared to the Saw films,Hostel Part II gets a two star rating in my travel guide.

When I first saw some of the ads for Knocked Up,it seemed like it was going to attempt to ape the success of the 40 Year Old Virgin by saying"Hey,we made that movie and you're gonna like this one because just our presence here makes it funny!" I went thru that with the Farrelly Bros(I must be the only one around who didn't think Something About Mary was hilarious. I laughed once during that film,once.)and was harding up my funny bone against this.

Was I ever wrong,and in a good way. Knocked Up lives up to every other positive review about it and then some. Judd Apatow is not only a great writer and director,he knows how to pull a good ensemble cast together that caps off the comedy like a well oiled machine. You can't even fault him for casting his wife in the movie because Leslie Mann is flat out brilliant in bitch mode:

Unlike Hostel II,I was actually engrossed in the characters and their various plights thru out the story. I felt bad for them,cheered some on and got mad at a couple of them(Leslie Mann's character,Debbie,is really hard to live with). Seth Rogan made one hell of a leading man,a truly believable Everyman that pretty much had some character growth without making a huge production number out of it. Both men and women get a fair shake in this tale of what to do when you wind up with pregnant with someone you've only met once. There's some real truths about marriage and relationships that hits home and makes the jokes that much funnier.

I've been to some strange double features before;one time,I saw Hellraiser III and Bob Roberts back to back. Bob Roberts was scarier than Pinhead,which is saying something there. Here,the original film truimphed over the sequel. Yes,I know that Rebecca Ekler is claiming that KU is a rip-off from her memoir but I'm going with presumed innocence towards Judd Apatow until further evidence.

Hard to compare a comedy with a horror film,but once again the comedy was more on target emotionally and I think that the audience for Knocked Up had a better time today than the Hostel II crowd. Bob Roberts is a pretty dated film nowadays but fortunatly,that won't be the case for Knocked Up. For those about to mock,we salute you!
Posted by lady t at 5:40 PM

Okay, now I HAVE to go see Knocked Up! And for the record, I did laugh uncontrollably during There's Something About Mary. But I know reasonable minds can differ.

You'll really like Knocked Up,Robin,it was a great time had by all. I reasonably differ alot-for example,I never got Ren and Stimpy(more of a Beavis and Butthead fan) and still don't see the appeal of SpongeBob Squarepants to adults.

On the other hand,Mystery Men is one of my favorite superhero comedies and it has lines like"We've got a blind date with destiny and she's ordered the lobster!" I find that funny,but I'm sure others are going "What?"