Top Chef Miami(aka season 3) started off well,as the fifteen chefs got together at a meet n' greet buffet where Host Padma and Judge Tom arrived to give them their first Quickfire Challenge. The QF was to create an amuse bouche from the food laden tables around them in ten minutes. Everyone rose to the challenge but the winner was Micah,with her tasty little Tuscan wrap. Among those who didn't do well here was Clay,who hollowed out a Granny Smith apple and filled it with different fruits. It looked fine,but way too big to be an amuse.

The Elimination Challenge was quite a doozy;the chefs had to create a surf n' turf plate using such exotic items as rattlesnake,sea urchin,wild boar,eel,black chicken and alligator. A knife draw decided the order everyone got to pick and choose their meats. On top of that,the dishes were to be served to Anthony Bourdain(who guest judged last season's Thanksgiving episode)along with the usual panel of judges. The chefs also were allowed to shop for extra ingrediants as well as raid the regular TC pantry.

A number of folks ran into probelms,like Howie who wasn't able to add frog's legs to his sea urchin with risotto plate before time ran out. He had to go out there and present an incomplete dish. Fortunately,the risotto was great and Howie was clever enough to hold his ground against Bourdain(who chided him for the missing food) by qouting a passage from one of Bourdain's own books. It was nicely done and earned Howie some respect amongst the judges,in my opinion. Kudos,my man,kudos!

More successful dishes included Hung's geoduck and slow cooked black chicken(black chicken is apparently a tough meat that's tricky to make tender),Micah's triple threat of kangaroo with sweet potato, poached egg with monkfish liver and ostrich carpaccio and Sara M's(there are two Saras in the competition)braised black chicken with geoduck and cucumber. Her use of the claw on the plate was very eye catching and impressed the judges quite a bit.

The winning plate,however,was Tre's ostrich fillet with abalone sauce,which looks tasty to me and I've never eaten ostrich. He was awarded a set of autographed(and "obscene doodled") Bourdain books and since Tre was in the bottom three for the Quickfire challenge,his victory was extra sweet.

Clay was asked to pack his knives and go home after his combo of wild boar chops and scorpion fish was pretty much inedible. The final choice was between Howie and Clay and the guy with the lousy tasting food got dismissed. Clay seemed like a nice guy but you could tell early on how tense he was about this whole thing and it showed in his cooking. So far,it's too soon to root for anyone just yet but there's alot of big egos floating around. Hung's not shy about his kitchen prowess and neither is Joey,who claims to be such a bad "motherf***er". Oh yeah,this should be fun!

Someone who is clearly not having fun is Aaron,still remaining on Hell's Kitchen and not doing any better this week than the last. When he's not crying,he is either about to pass out on the restaurant floor,taking a nap during the early cooking challenge of prepping Dover sole and doing a crappy job of deboning the sole at tableside for the customers. Since it was the guys' turn to screw up this week,Aaron was in danger of being put up on the chopping block but called up instead were Eddie and Josh.

Choosing Eddie I understood ,due to his ruining both the spaghetti and the risotto which lead to pulling him off of that station in the kitchen. Josh's only big sin ,however,was making the chicken too dry(Ramsey was so pissed at him for not fessing up that he slapped it off of the counter)and talking too much. Eddie was dismissed but I'm wondering just how long it's going to be before Aaron's number is up. 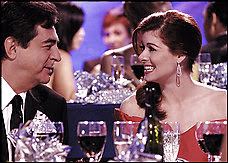 I not only watched the 2 hour premiere of The Starter Wife but last week's episode as well and have to say that I get the whole Debra Messing thing now. She's very likable and funny,not to mention a whiz at working with an ensemble cast. I like the whole Hollywood lives behind the scenes vibe and the dream sequence film parodies(they're already done the Wizard of Oz and From Here to Eternity) that Debra's character,Molly, has.

Tonight's episode should be a blast,as Molly's soon to be ex-husband is intending to marry his bimbolina pop star girlfriend,Shoshanna. So far,we've only seen Shosanna in her Britney Spears-esque video and it should be fun to get more of her:

Rescue Me: The season premiere kicked off with everyone thinking that Tommy's on his way to jail due to the fire,Garrity trying to settle into a comfortable arrangement regarding Maggie's love of porn and a hell of a rescue mission that I thought might be a dream sequence but was amazingly surreal and real. They did save a cat or two tho. It also looks like Sheila may be getting Tommy to help her run a scam on the insurance company over the house fire which may blow up in their faces. Let's see how this all plays out,shall we?

The Soup: One of the best pop culture mockery shows around,in my opinion. I don't really watch E! on a regular basis but every Friday at ten,I make it a point to catch up on anything I might have missed during the week. Here are a few highlights for your enjoyment:

CHECK WHAT THE KIDS ARE WATCHING

Aaron is a hot mess. He will have to leave soon just to preserve his mental and physical health. He was an emotional sniveling wreck from the beginning. And it took him 20 minutes to filet the fish.

Aaron not only took 20 minutes to debone that sucker,he didn't even get all of the bones out of it! I've worked with hypochondriacs before but he takes the cake!