The Sopranos' ending-satisfying or sorry? 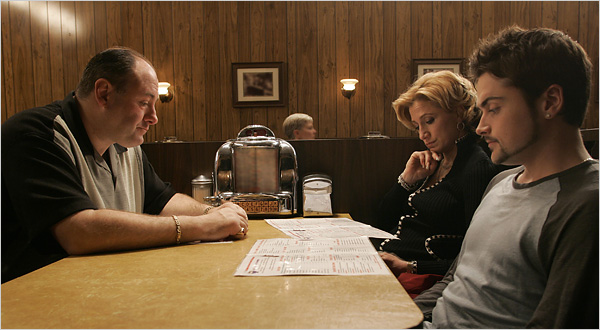 I haven't watched the Sopranos for a few years,partly due to not having HBO for awhile,and also having moved on to other shows. Last night,I sat down with my mom to check out the last episode of the series. We had watched the first few seasons together as a family in my house and it felt right to see how the show was going to end its run.

Since there's not a clip available,let me set the very last scene for you. Picture it,Tony Soprano enters a diner to meet his family for dinner. He's the first one to arrive. As he waits for them to show,he selects a tune from the tabletop jukebox to play-Journey's "Don't Stop Believing"-which plays over all of the other interactions that go on.

Carmella comes and then later A.J. who gripes about his new job at a movie production company and orders onion rings. Shady characters are everywhere,at the counter,going into the bathroom and thru the door. Meadow is having a hard time with her paralli parking as her family sits and waits while munching onion rings. The tension is growing as she finally parks the car and hustles across the street. Meadow enters the diner just as Tony looks up....

And then,BOOM! The scene abruptly stops,with the screen in silent black. We both thought that the cable went out for a minute or two. Then the credits began to roll. Yep,that was the ending,folks. A total yanking of the carpet right out under our feet. A blunt baseball bat blow to the back of the head. Or,as my sister succulently put it,"They blueballed the audience."

Granted that at this point,I was a casual observer of the show but I've seen quite a few series come and go in my day. Some had plenty of time to wrap up their storyline and send their characters off with the fate they deserved. Others were cancelled way before their time and had to scramble to give the loyal fans some sort of closure. A few even like Veronica Mars didn't even get the chance to say a proper goodbye but atleast handed us a glimpse of what might have been. The Sopranos just cut us off like a bartender who thinks you're too drunk to order another round.

"Come on,what did you want-a big gun fight? Tony getting arrested? Some big whoop-de-do? It ended like that because life doesn't have closure! It was artistic." My answer to that,no,I didn't need to see the Sopranos end with a hail of gunfire or a big arrest or anything like that. It just needed to have some sort of ending,good or bad. This came off as indifferent. Remember that scene in Misery where Annie Wilkes gets all worked up as she tells Paul how the chapter play movie serial had what she felt was a cheat ending? "He didn't get out of the cockadoodie car!" I don't feel as mad as that but I can understand how folks might feel gypped here.

It's particularly annoying,since I know that a open ending to a long running show can be done without totally disappointing your audience. You're not going to make everyone happy,true,but you can do it and still give the longtime fans a good vibe about how things may turn out for the characters. Here are some prime examples:

Buffy The Vampire Slayer's So Long to Sunnydale

So,while Sopranos fans may debate over how things turned out,one thing is definately clear-if David Chase's intent was to leave people talking about the show,he truly succeeded.
Posted by lady t at 11:13 AM

I liked the ending. It answered the question whether Tony lived and left it open to imagination. I think that's what bothered everyone. They wanted to be told what to think.

I think we may to agree to disagree here,PCD. While I'm all for open endings,this one just seemed too abrupt for me. You're right about some folks wanting to be spoon fed a finale but this one,...I don't know.