Third time was definately the charm for me at BEA '07

This was my third visit to Book Expo America,and it felt like the best one that I have attended yet. Yes,it was hot and crowded at the Javits(when is it not hot and crowded there?)but certainly much more easy to get around on the floor than the NYC Comic Con.I may not have gotten every book or seen every booth that I intended to,but I did find plenty of goodies,met a few folk that I've only spoken with via e-mail and found a few surprises along the way.

Let's start with the books-I not only met author Min Jin Lee at the blogger panel I went to(more on that in a moment)but was introduced to a good friend of hers,Kim Sunee. Kim is a journalist and founding food editor of Cottage Living,who is coming out with a memoir in January '08,called Trail of Crumbs:Hunger,Love and the Search for Home. She talks about the many places she's had to call home,from being left at the age of three in a Korean marketplace to being adopted by a family in New Orleans and later moving to France to be with her lover and being stepmother to his eight year old daughter. After meeting Kim,I just had to get a copy of her book and I'm so looking forward to reading it and learning more about this nice person that I was lucky enough to meet thru another sweet person,Min Jin Lee.

Lorna Landvik was signing advance copies of her new book for September,The View From Mount Joy,at the Random House booth and I was bold enough to give her one of my shiny new business cards. I've always liked her books,starting with Patty Jane's House of Curls and one of my favorites of hers is The Tall Pine Polka. Lorna's books are like a nice cup of tea,something great to curl up with and just enjoy. I did hit her up for an interview(hope she didn't feel put on the spot there)but if that doesn't happen,I still do intend to review VFMJ this fall.

Other good books that I found include two novels from Algonquin: Swim to Me by Betsy Carter(August) and An Arsonist's Guide to Writer's Homes in New England by Brock Clarke(September). Arsonist's Guide tells the story of Sam Pulsifer,who is being accused of a spree of set fires to famous writers' houses,due to having accidently burned down Emily Dickinson's house in his teens,and must find the real culprit to clear his name. Swim To Me has Delores Walker running away from her feuding family in the Bronx to become a mermaid at Weeki Wachee Springs down in the Gulf Coast of Florida. Weeki Wachee is falling upon hard times,having to compete with Disney World and such but perhaps Delores will still be able to fulfill her dream of being one of the Live Mermaids.

I also picked up a young adult novel from HarperCollin's teen division called The Luxe by Anna Godbersen(November),handed out by a young lady wearing the exact same dress as the girl on the cover. The Luxe is set in NYC during the year 1899 and is described on the back cover as "Gossip Girl meets the Gilded Age." We'll see about that. I missed seeing A. J. Jacobs but did bring home a copy of A Year of Living Biblically,which will be out in October(those pictures of him with his various stages of beardhood are too funny for words). 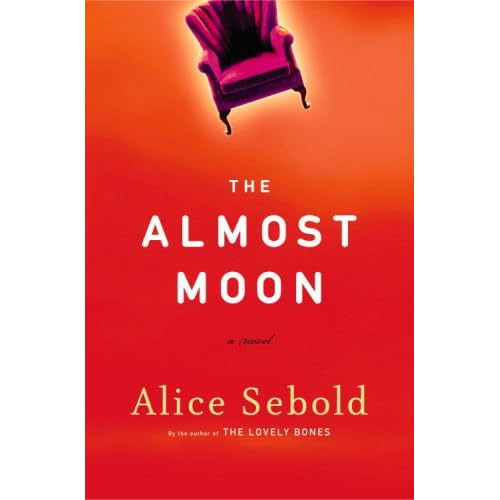 Alice Sebold's The Almost Moon(October) was another lucky grab for me and the opening sentence of the book is a grabber as well-" When all is said and done,killing my mother came easily." Now if that line doesn't make you sit up and pay attention,I don't know what will! Jennifer Donnelly's The Winter Rose(January '08) gave me an extra bonus,as it is the second book in a trilogy and I happened to have a copy of her earlier one,Tea Rose,in one of my TBR piles. Now I have no excuse but to read them!

Another new series is Jennifer Rardin's Jaz Parks,who is an assistant vampire assassin for the CIA. She begins her adventures with Once Bitten,Twice Shy in October and has two follow-ups planned to be out by December of this year and February of next. I also found a paranormal novel written by three authors-Jennifer Crusie,Anne Stuart and Eileen Dreyer-called The Unfortunate Miss Fortunes. UMF has three sisters with magical powers who are being romanced by gents sent by their aunt to strip them of their skills. Sounds like a fun read there,plus it came with it's own bookmark. Specially made bookmarks are great little giveaways. 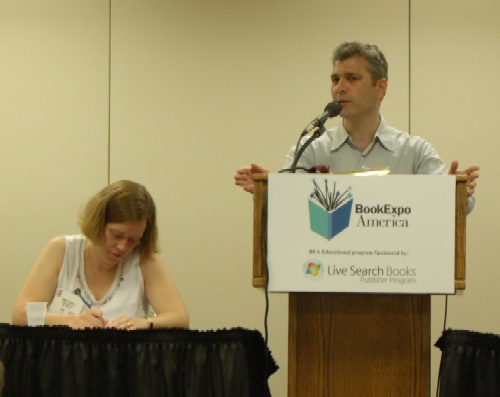 The panel that I went to was called "Blogs: Is Their Growing Influence a Tastemakers Dilemma? The Crossover Hurdle" that was hosted by Bud Parr. The panel was made of three bloggers(James Marcus,Anne Fernald, and Lizzie Skurnick) and Dwight Garner from the NY Times. Edward Champion gives a much more detailed and better review of the discussion than I can(and my apologies to him for using one of his pictures but I wasn't smart enought to bring a camera.)but I can say that it was a good talk about what blogs can and are doing at the moment to promote reading and open mindedness. Naturally,the ongoing feud between online and print reviewers came up,with most everyone there hoping that we could get beyond that and work together. I asked the panel(in a very rambling way,I'm afraid)about why writers felt the need to fight like Jerry Springer guests and brought up the Chick Lit vs. Lit Chicks fracas from last year. The response I recieved was good,but I wish that I had sounded as smart as Jessica Stockton,aka Book Nerd,who made a good point about who the real enemy was in this debate.

The best part of the panel was sitting with Min Jin Lee,who sent me a lovely e-mail thanking me for my review of Free Food For Millionaires. She is a truly good natured soul who was kind enough to sign my copy of FFFM,that I had brought with me. This may sound sappy,but after hearing so many stories about how artists are not nice people in real life,it's great to find one that is an exception to the rule. If you happen to see a copy of FFFM somewhere and wonder if you should take a chance on it,just remember that the author was cool enough to treat a regular blogger gal like me as a dear friend.

And finally,while I didn't get to grab one of those awesome Harry Potter and the Deathly Hallows tote bags,I did get to board the Knight Bus. Scholastic is sending out it's own version of the HP3 purple machine to tour several states and visit libraries as part of their big promo for the last book. Folks who went to the Scholastic booth and recieved special wristbands were allowed to look inside and record a 30 minute message about Harry Potter for their website. I was given a special code to check on my message,which may or not be used in the final cut. Regardless of that,it was very cool to check it out and a fun way to cap off BEA: