On the second installment of Emma on Masterpiece Classic last night,we were introduced to the latest version of Mrs. Elton,the former Miss Augusta Hawkins of Bristol who the hapless social schemer Mr. Elton takes for his wife after that embarrassing Christmas Eve coach caper,which stunned our heroine and lead to some minor heartbreak for poor Harriet Smith.

As Mr. Knightley later tells Emma,she chose a better wife for Mr. Elton than he did for himself;Mrs. Elton is one of those delightfully awful characters who make you glad not to be seated next to at a social engagement but fun to watch as she makes others squirm under the scrutiny of her condescending snobbery and exaggerated mannerisms. She may be a minor character but her determination to be a major player in Highbury is what makes her annoyingly endearing to any production of this story. 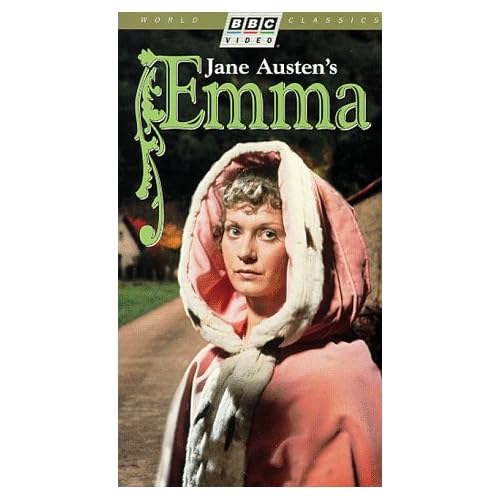 Fiona Walker was one of the first to take on this role back in 1972 for a BBC miniseries and it was not the last foray into televised serial drama. A few years later,she played the doomed Agrippina in the well renowned BBC/PBS production of I,Claudius,which was directed by her husband,Herbert Wise.

She also has some sci-fi cache from her appearances on Doctor Who(in 1964 and 1988)and a few other classic lit TV adaptations such as 1987's Vanity Fair,plus a 1985 rendition of Bleak House. She certainly makes her mark as the self appointed social director of Highbury who refuses to take a hint about her presumptions,except when politely but firmly rebuked by Mr.Knightley:

One of my favorite depictions of Mrs. Elton is by Lucy Robinson,from the Andrew Davies adaptation of Emma in 1996. She also played another snarky Austen supporting player in an earlier Andrew Davies production,Pride & Prejudice as the snide married sister of Mr. Bingley,Mrs. Hurst.

Interesting coincidence,Robinson has a Doctor Who appearance on her resume(a 2006 episode called New Earth),just like Fiona Walker. What is it about being Mrs. Elton that makes actresses drawn to Doctor Who?

Perhaps it's the orderly nature of the villains on that show-not hard to picture Mrs. Elton as cheerfully organizing nefarious doings for an evil robot overlord in order to raise her social standing and that of her "caro spouso",hunting down all puppies in her way:

Around the same time.Mrs. Elton had her big screen debut in Douglas McGrath's Hollywood version of Emma that had Gwyneth Paltrow in the lead and Alan Cummings as her Mr.E. Juliet Stevenson did credit to the part nicely and also was in the cast of McGrath's attempt at Charles Dickens' Nicholas Nickleby in 2002.

Her other film credits include Bend it like Beckam,Mona Lisa Smile and Truly,Madly,Deeply but so far,no Doctor Who roles. Well,they are always bringing that series back in one form or another,so stranger things have happened as Miss Woodhouse would say:

How does the new Mrs. Elton rate in comparison with her pompous predecessors? Well,I am happy to report that Christina Cole is as wonderfully obnoxious in her performance as the other fine actresses who have gone before her.

Austen country is familiar territory to her,having played Caroline Bingley in Lost in Austen and yes,she was on Doctor Who as well! Three Mrs. Eltons on Doctor Who,that is quite the odd common denominator.

Perhaps it's a good luck charm of sorts for preparing these ladies to do their very best in being a most annoying thorn in Emma's side. Christina Cole certainly does keep up her part in making Mrs. Elton as charmingly irritating as possible and by the conclusion of this miniseries,hopefully earns some more points in the Let's Make Emma Completely Uncomfortable game:

I was sad that I missed Emma but maybe it will come back on again at some point. Christina Cole was great in Lost in Austen, so I expect she was in Emma as well.