Some sweet updates on the sugar art world

One of my favorite pop culture pastimes is keeping track of the wonderful world of sugar art and pastry,a steadily growing staple of food related TV. There's been some entertaining developments of late that warrant a tasty little write-up,so get ready to dive into the frosted goodness,folks.

Most recently,the Oklahoma Sugar Art Show,hosted by a good friend of this blog,the renowned Kerry Vincent ,held it's annual presentation of creative culinary delights and even topped themselves with an amazing Halloween themed edible display.

Along with Bronwen Weber,a Food Network Challenge champion who claimed another victory on the Giant Wedding Cakes episode that aired over the weekend,Kerry teamed up with fellow sugar artists Carolyn Mangold and Cheri Elder to whip together a massive showpiece titled "Halloween's Last Hurrah."

It was done right on the premises of the show and it took about 75 people(seasoned professionals and students),plus a huge amount of fondant to cover the entire structure that was about fifteen feet tall. Specially made sculptures were added to the landscape and the finished result was a truly sweet Halloween treat.

Hopefully,more about this year's Sugar Art show will make it to Food Network's line-up(sometime in 2011 is my best guess)and we'll get to marvel at all of the incredible cakes that graced the display tables,plus a fuller look behind the making of this record making culinary event: 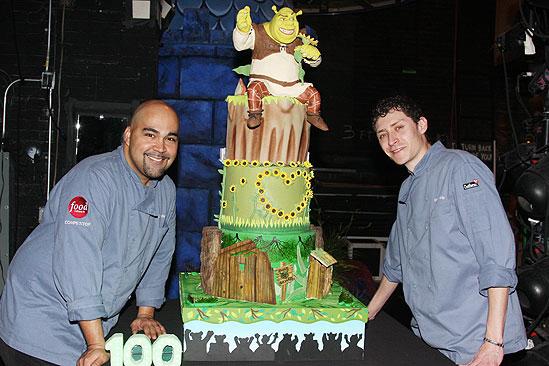 Speaking of Food Network Challenge,their recent batch of cake contests has been paving a path to glory for one of their regular contenders. While plenty of promising cake creators have made their mark on this series,Orlando Serrano is really one to watch for here.

Orlando Serrano has made nine appearances on the show within four years and getting better and better with each pop culture themed challenge. He's made memorable cakes based on Disney fare such as A Bug's Life and the Broadway adaptation of Shrek and this year's acclaimed Toy Story 3,which earned him a well deserved win:

However,his true masterpiece came about for the Extreme Urban Legends challenge that aired in time for Halloween. Each chef had to pick a classic legend and tell the story via cake and sugar.

Orlando chose the "spiders hatching in the hairdo" tale,using for the first time anywhere in cake creation,animatronic features that made the eyes and face of his unfortunate bad hair day victim(named Ursula Lebowski) come alive. He even had a recording of Ursula's screeching phone call for help with her hair emergency,which added some fearsomely funny flavor to this crazy cake. Another well earned win for Orlando and I look forward to seeing what he does for the upcoming Mardi Gras challenge early next year:

With the holidays rolling around,the need for cake both on screen and the dinner table is at it's highest demand. So take a break from those trendy reality shows and check out a couple of sugar based series instead. Yes,it may be visual comfort food but at least you don't have to put up with cat fights and pointless posturing for the spotlight.

The realm of sugar art has it's own ways of making fun,plus a sharply sweet sense of humor about itself,something that many fields of interest could seriously use there. Watching the flour fly instead of the fury is a step in the right direction,if you ask me:

We love you Lady T thank you for watching out for us and keeping us in the news -- you are a treasure.