Top Chef:JD 's Final Four,a three ring circus of chaos on TAR and an extra bit of backstory for The Vampire Diaries

Top Chef:Just Desserts gave their Final Four contenders a rather personal Quickfire challenge this round. Each of them had to make a set of four chocolates that represented aspects of their life,sort of a Forrest Gump inspired theme-"Your Life as a Box of Chocolates!"

I really thought Danielle might take this one;her flavor profiles pleased both Judge Gail and special guest Francois Paynard(who Morgan happened to work for at one time) and were rather upbeat. She made a baseball shaped truffle(with caramel corn and peanuts) as a salute to her dad that Paynard seemed to like immensely.

However,moody Morgan won yet again and while I'm sure his chocolates tasted great,at least two of them were given negative inspirations such as bitterness over his marriage and pressure from the competition. Geez,has this guy never seen or heard of Like Water For Chocolate? Okay,I didn't even read the book but I know better than to associate bad times with dessert!

As Morgan grumpily basked in the knowledge that one of his chocolate creations would be added to a Godiva collection nationwide,the Elimination challenge was announced. Each chef was tasked to bake and design a cake for the 61st wedding anniversary of former guest judge Sylvia Weinstock and her husband Ben.

In addition to being in the Finale,the winner of this challenge received fifteen grand as their prize. Everyone got to talk with Ben and Sylvia,who gave them a few details to work with such as their favorite flavors(she likes lemon,Ben is a chocolate fan)and how they first meet.

Since Ben and Sylvia mentioned a make out session under a grand piano(that story sounds sweeter coming from such a devoted couple),Morgan put a little piano on top of his cake,along with a yellow bikini top draped across the bench to represent what Sylvia was wearing at the beach party where she first met Ben. Slightly tacky there,Morgan,seriously!

The raspberry panna cotta and lemon sponge layers went over well but the piping of shells as decorative trim wasn't quite up to par-gaps were easy to spot-and all of the judges agreed that this was a pretty safe offering for Morgan to be putting up at this stage of the game.

Yigit was particularly nervous,due to his not finishing his chocolates for the QF,yet his cake was rather elegant in it's design. Even that little touch of whimsy that he included-Sylvia's eyeglasses-came off great.

His biggest fumble was in the flavors. Yigit's almond cake with chocolate mousse and layers of sponge cake with lemon cream were fine on their own but the fruit sauce that he threw into the mix was a mess. Fortunately for him,that cake was deemed good enough to grant him a spot in the finale next to Morgan.

You have to give Danielle credit for boldness,as she chose to frost her cake the same color as Sylvia's wedding dress,gray. She also had pink roses(which were the wedding bouquet)and a tasty chocolate cake with sour cherry compote and Greek yogurt ice cream.

Her flavors were the deciding point in giving her win and the fifteen grand. Danielle has not been a favorite of mine on this show,with her occasional bouts of whining and oddball antics but she certainly knows when to pull out all the stops. Morgan might be unpleasantly surprised to discover that she's more of a worthy opponent than he realized there.

The person that Morgan truly wanted to see go home was Zac,who wound up sabotaging himself. Even he admitted that his cake was a disaster of epic proportions,making something that Sylvia herself said would be a good Bar Mitzvah cake but clearly not mature enough for a wedding anniversary.

While it was smart of him to connect the two layers of dark chocolate and lemon sponge with a scoop of passion fruit ice cream,Zac's disco dust ways put him out of the running here.

Next up is the Finale and since Morgan has the contenders that he was hoping for as his rivals for the last stretch,all I can say is be careful what you wish for,buddy!

Things got off to a three ring frenzy on this leg of The Amazing Race,as the first Detour had teams either trying to spin plates with clowns or learn a musical piece on the accordion. The confusion didn't stop there,as more than one couple had trouble with finding the clues and reading the instructions for each step of the way.

Claire and Brooke were quick enough to realize that they broke a rule by taking a taxi to one destination and went back to walk it over again. That replay turned out to be a savvy play,since Kevin and Michael had two infractions that resulted in them getting a one hour penalty at the Pit Stop.

That setback cost them the race,despite the fact that another team(Chad and Stephanie) received a penalty wait as well. Since Chad and Stephanie only had one mistake to make up for,not to mention having to go back and pay their cab driver,they staid in the race. Kevin and Michael did their best but at least they got some quality bonding time out of this whole experience: 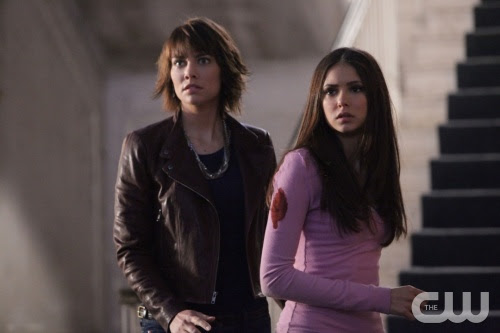 As Gilda Radner used to say,it's always something,especially for Elena on The Vampire Diaries as she found out that her doppelganger status came with more than an evil bloodsucking twin on her trail.

Turns out that Katherine aka "Katerina" was an earlier biological copy who was targeted for ritual sacrifice by an ancient order of vampires determined to break that pesky moonstone curse which keeps them out of the sun. With the seemingly easy access to magic rings that take care of that little problem on this series,I don't know why these vamps are so eager to spill blood they can't drink. Subplot goodness abounds,as it looks like Bonnie and Jeremy might become each other's significant others(a vast improvement for Jeremy,since his last two love interests were vampirellas)and Caroline's desire to help newly made werewolf Tyler adjust to his scary circumstances.

While all of that is fun to watch,it's the vampire lore that fans of this show love the most and looks as if we're going to get a heaping helping of that ghoulish fare before Thanksgiving hits. Boo appetit,folks!:

THE WALKING DEAD: The ratings for the first two episodes of AMC's newest series have been strong enough to get a green light for a second season already. With Rick meeting up with more survivors and making new friends and enemies along the way,there should be quite a bit of plot meat left on the bones after this first go-round ends.

One development that's bound to cause friction is the group's leaving of racist Merle on the rooftop(a move that I fully endorse)which doesn't go over well with his younger brother. A rescue mission may be in the works there,a plan of action that should be avoided at all costs in my opinion. Then again,a few other people in that party may have more than one reason to see Rick risk his neck again: