A pop culture party for the newly wed couple royale

In the wee small hours of the morning,on this side of the Atlantic,Prince William and Kate Middleton officially tied the royal knot for all and sundry around the world to see.

This wedding has been growing into quite the media event,with many eager to dismiss it as trivial as there are those revved up to celebrate it. While I only saw a portion of the pre-recorded proceedings,I was able to watch the ground breaking kiss that the bride and groom shared on the balcony of Buckingham Palace live today(the two kisses,actually)and was struck by how truly happy they seem to be.

You can also see the authentic joy in the streets of London,as multitudes of well wishers,both local and out of towners from all over the world,are making merry in the best sense of the term. With so much sad news to report these days,it's a blessing to have a good reason to be happy for a promising young couple like this.

In that spirit,LRG presents to you a pop culture wedding themed party mix in honor of William and Kate. If you're not in the mood for bridal bliss,sorry but you'll have to look elsewhere to escape the royal wedding mania:

BELLE OF THE BACHELORETTE BALL

Even a renewing of long held wedding vows can be enough to start a party,as Emily Gilmore proved when Lorelei and Rory slowly realized that they were expected to give her a bachelorette bash the night before the ceremony.

Fortunately,impromptu parties are a Stars Hallow tradition,along with generous servings of booze that change a high brow lady into a broad:

The most recent addition to the sitcom romance genre is The Office's Jim and Pam who, as much as they tried, couldn't resist allowing the gang at Dunder Mifflin to take part in their wedding.

Of course,they managed to keep true to themselves by having a somewhat secret ceremony on board a Niagara Falls tour boat before the actual formal one for friends,family and the antics of Michael Scott. A wise and amusing decision,indeed:

A DREAM WEDDING COME TO LIFE

During the second(and sadly final)season finale of Legend of the Seeker,wizard Zeddicus used a spell to alter the past in order to save the world from the present day threat of the Underworld's rising.

That appeared to be a good idea at first,since Zed found himself in this different reality to be a participant at the wedding of Richard and Kahlan,who were at last able to become man and wife. While that bliss didn't linger long,it was a sweet treat for the show's fans to savor: 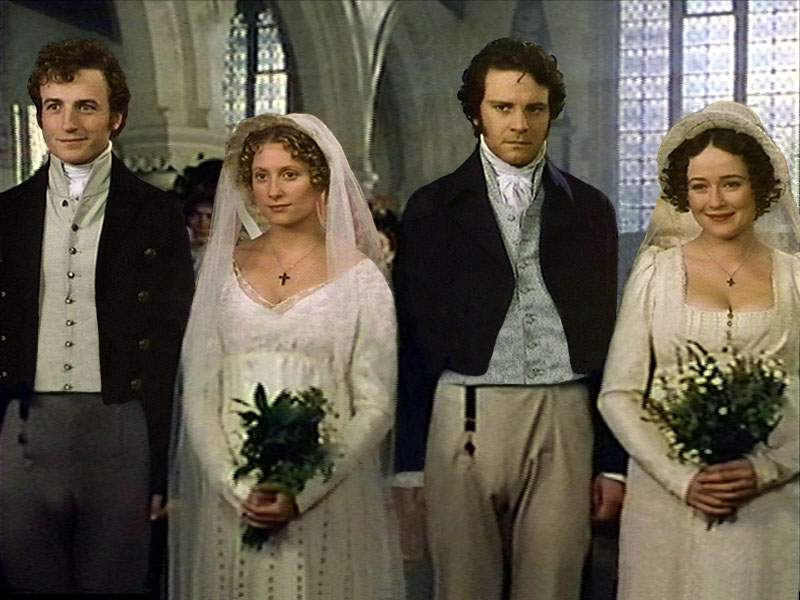 A DOUBLE DOSE OF AUSTEN

It's hard not to think of Jane Austen when the subject of English weddings comes up(for me,anyway)and since most of her stories ended with a marriage or two on the way,including her here is entirely pop cultural proper.

Let's start with Pride and Prejudice,the 1995 miniseries that had Elizabeth and her Mr. Darcy shared their wedding day with his best friend Bingley and her beloved sister Jane. Granted,in the book they had separate ceremonies but in this insistence,the duel nuptials serve well to wrap up the various plot points rather nicely:

At the start of the P&P based Bride and Prejudice,there's a wedding party where all of the potential love interests hit the dance floor as well as sing their hearts out about seeking your soul mate.

Like most weddings,things get a little out of hand yet despite a few awkward moments,everyone enjoys sending the newly wed couple off on a good note:

Best of luck and much congratulations to William and Kate on their special day,along with joy to all who are rejoicing along with them. Sharing in the happiness of others is a great way to keep that spring in your step and a song in your heart,not to mention a sense of surprise for some: