A parade of Poirots for our Agatha Christie giveaway winner

Good day,friends and readers and welcome to you all as we are happy to announce the winner of our LRG Agatha Christie Giveaway who will be receiving a lovely "Queen of Crime" tote bag,courtesy of this blog and Harper Collins.

*Evening gown clad presenter walks over to microphone with envelope,testing the mike for sound. Once she is satisfied that it's working properly,envelope is opened*...and the winner is.....Beth in Colorado! *applause,cheers and confetti are flying through the air*

Congratulations,Beth and thank you for entering. To claim your prize,please e-mail me with your preferred mailing address at livingreadgirl@yahoo.com(it would be helpful if you titled your e-mail Christie Prize Winner)and your tote bag will be shipped out to you as soon as possible.

In honor of Beth's win,the rest of this post will showcase clips of her favorite Agatha Christie detective,Inspector Hercule Poirot. While Christie did write a number of stand alone mysteries,a good deal of her popularity in the genre came from her stories featuring the dapper Belgian sleuth who slowly but surely made his way towards the murderer hiding in plain sight.

One of the best known Poirot tales is Murder on the Orient Express,written in 1934 and made into several film versions.

The most successful one was the 1974 movie directed by Sidney Lumet and cast with a strong array of stars including the likes of Sean Connery,Richard Widmark,Lauren Bacall and Ingrid Bergman who received a Best Supporting Actress nomination for her role at the Oscars that year.

Poirot was played by Albert Finney,who was up for Best Actor but didn't win. The movie was given a slew of other Oscar noms as well and did well enough at the box office to inspire Hollywood to make more ensemble big budget Christie adaptations. However,Finney chose to be Poirot this one time,a mystery worth pondering: Peter Ustinov took over the role for six films,including 1978's Death on the Nile which had such grand dames as Bette Davis,Angela Lansbury and Maggie Smith on deck for a mysterious death combined with the disappearance of an expensive strand of pearls.

I remember seeing this film on cable back in the eighties and being enchanted with the interaction between Poirot and the various suspects,especially Bette Davis. She had quite a presence there(she would've made an excellent Lady Catherine if someone had the sense to remake Pride and Prejudice back then).

Lansbury was also a delight to behold and rather amusing to see in this Christie caper before she was cast as Miss Marple a couple of years later in The Mirror Crack'd: Speaking of Miss Marple,many Christie fans longed for her to team up with Poirot but the authoress thought that was a very bad idea and never wrote a story that placed the two of them together.

That didn't stop filmmakers from trying to connect these two crime fighters on screen. a 1965 British version of The Alphabet Murders slipped in a cameo appearance by Miss Marple(played by Margaret Rutherford)who loudly comments on the case while walking by a perplexed Poirot(Tony Randall)in the street.

Given his reaction to her analysis,perhaps Christie was right all along in keeping them apart in print: 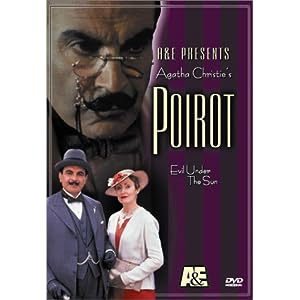 Nowadays,film editions of Christie's work are made for TV affairs,with a good number of them featured in the Mystery section of PBS' Masterpiece series. David Suchet is considered by the majority of Poirot enthusiasts to be the best incarnation of the character in any media format.

I do have a slight recall of seeing Ustinov in Evil Under the Sun,which had several changes from the source material but after viewing Suchet's Poirot in this clip from his version of that story,I am intrigued to check it out. Seems we both share a discomfort at being urged into a health regimen:

I hope to hear from Beth soon and to catch up more on Hercule Poirot,both in book and film form. Miss Marple is still a favorite with me but it never hurts to take a few cues from Monsieur Poirot on murder. How else would I know to listen for the Evil Voice in order to detect the true villain of the piece?: