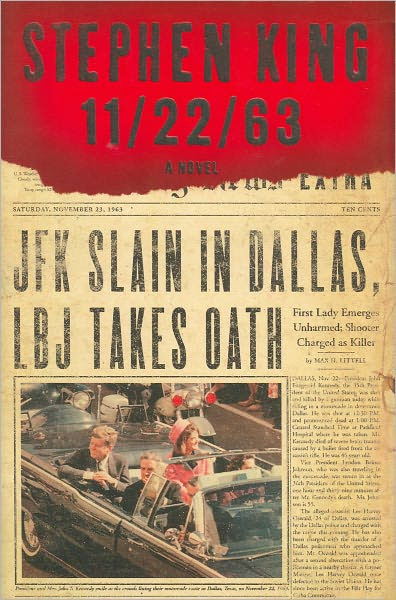 As part of my Girl's Night Out this past weekend,I treated myself to a hefty new hardbound book,one that's been receiving quite a bit of praise and scrutiny even before it hit the stores. Stephen King's 11/22/63 falls more into the sci-fi realm than his usual horror story stomping grounds as the name of the game is time travel.

As the title suggests,the core focus of our leading man Jake Epping's journey into America's past is to stop the assassination of JFK. It's a bit of a dying man's request,as his good friend Al(who discovers the doorway that brings you to the year 1958 in the storeroom of his diner)becomes too ill to complete his self appointed mission.

Jake does a trial run at first,attempting to thwart a tragedy closer to home,before making that choice to alter history. He's not without his doubts,of course,because there is no guarantee that preventing one major event like this from occurring will change the world for the better. Yet, being so close to doing so is quite the temptation that not even the most stoic of historians could easily refuse:

While the concept of time travel has been vastly explored in all sorts of fiction and non fiction as well,so has the impact of JFK's untimely demise,from books,film and TV series that debate the unknown factors still surrounding what happened on that fateful day and speculation as to how things might have been different.

No matter how you slice it,the Kennedy assassination is a pivotal moment in time and history that can stir up serious ripples in our pop culture world. It crosses more than one genre boundary,from the expected science fiction takes from the likes of Quantum Leap and Red Dwarf to and even more expected period drama depictions such as Mad Men and even a modern day mystery series like Bones has put their two cents into this already overcrowded hat: 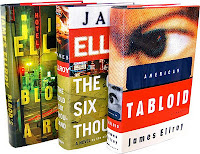 Putting aside the Kennedy assassination for a moment,that whole era holds a strong fascination for many artists and for good reason. It was a time of serious upheavals in society,many of which were meant to improve the lives of those who weren't getting their rights respected.

Regardless of the progress being made in those quarters,the heavy hand of dirty dealings was still packing a powerful punch there,something that started to be acknowledged openly as time went on. One writer whose best literary achievements are based upon the real and the imaged hijinks of the sixties is James Ellroy,a man who can be seen as even scarier than Stephen King there.

His dark obsessions with that time period are as through as King's in some respects and the two of them would certainly have some interesting reminiscences about those days if they ever met up and fell into a conversation. One of the main differences between them,however,is that the monsters in King's books are for the most part imaginary while Ellroy's are all too real: 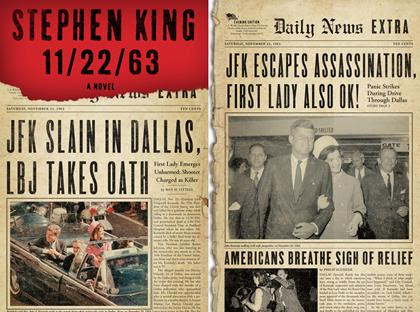 I'm only in the early half of the book but already,it's proving to be one of those hard to put down reads. As a pretty stalwart devotee of King's work,his balance of the sinister with the sweet is familiar country to me and his recreations of the fifties and sixties do make you feel right at home.

However,much like Jake Epping,this mode of Americana is foreign territory to me from a personal experience standpoint. Fiction allows you to be a tourist in many different times and places,with the advance of technology promising to give you a 3D upgrade,and that sense of realistic unreality is well captured here.

It's especially chilling when you consider the possibilities that fore knowledge brings to the mix. It's one thing to live through turbulent times and quite another to know what happens next before anyone else around you does. Talk about your blurring of the lines between story and the telling of the tale there-very shudder worthy material,if you ask me.

Part of the reason that I think this book is going to be classic is that King was smart enough to let enough time pass before taking this big boy on. He had this concept early on but knew that he wasn't ready to do it justice back then. That's a notion that would benefit many other artists in taking on such big themes as 9/11,for example.

Not saying that you have to make certain topics off limits indefinitely,but putting some distance between you and that particular event might help your creative vision and allow you to gain some real perspective on the matter. Some are able to handle these sticky wickets better than others and at a more rapid pace,granted,but standing back for awhile in order to really drink in the big picture is always a good idea.

How well 11/22/63 is going to do with readers overall(and movie goers,if the film adaptation can get off the ground before the end of this decade)is yet to be seen. The odds are good that this King opus will stand the test of time and bridge more than one gap between generations. I'm more than willing to just keep the pages turning and see what station this crazy train of dark wonders ultimately pulls into,which is a good enough ticket to ride for any reader of any time. Wish me a happy trip into the light fantastical here,folks: