Which leading lady will dominate the silver screen,Snow White or the Evil Queen?

There's been a revival of interest in fairy tale lore these days in Hollywood,with TV shows and two live action productions of Snow White that all have one thing in common;blurring the line between the family friendly versions and the darker origins of the original stories.

In the Snow White sweepstakes,the first trailer for Snow White & The Huntsman has been released and what really captured my attention here was it's focus on the Evil Queen(played by Charlize Theron).

While the main setting of the plot is more down to earth,with rebels looking to overthrow the current regimen with the help of the outcast princess(Kristen Stewart),her royal wickedness has major magical mojo at her command. She's pretty damn impressive,especially when she consults the magic mirror,and making me want to see this one next June:

I am a total Evil Queen fan,ever since my first viewing of Disney's Snow White and the Seven Dwarfs as a kid. Yes,Snow White is the gal you're supposed to be rooting for and while I do want her to get her happy ending,the Queen was just way more interesting.

From her dynamic cape and cowl ensemble to her obsession about her looks that ultimately sealed her doom,the Evil Queen was and is a show stopper. Her presence seems much more lively than Snow's sappy little sweetheart vibe and I know that I'm not the only one out there who wanted to don her crown: 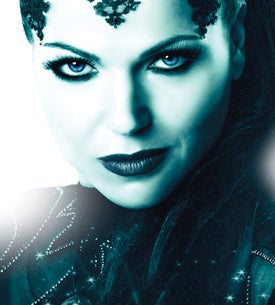 Julia Roberts is set to be the Evil Queen in the other SW film but she's got a lot of work to do if she wants to make her mark on this role. Being a villain is not something that Roberts has really attempted in any of her previous movies and this one truly sets the bar high.

Even the new series Once Upon a Time has a strong linchpin with their Evil Queen(Lana Perilla)and it would be a shame if such a big movie star was easily overshadowed by a small screen version of the same classic character: Too bad that we don't have a pop culture magic mirror to offer us a vision of which Snow White story will come out on top in 2012. However,in terms of keeping the persona of the Evil Queen alive and well,no sorcery is required to see that delightfully wicked diva will be just fine now and in the future.

Such a juicy part does threaten to dominate the heroine of the piece and offer prime opportunity for a grand dame to outshine her. The best advice that I can give to either party is,hey all's supposed to be fair in love and war,which applies to screen time,too.

To the Snow Whites who are about to face off on their respective Queens,get ready to rumble,ladies or it won't matter who is the fairest. It's the most memorable that counts in this race: