TAR gets cheesy,GOT's Jaime loses his grip and Mad Men's secrets and lies

Homage was paid to a past challenge on The Amazing Race this week,as the remaining teams arrived in Switzerland and were tasked to carry a quartet of heavy cheeses down a steep hill.

Since they also had snow to deal with,a pair of small sleds were provided for each couple to use and that use was mandatory. Chuck and Wynona found that out the hard way,as they barely managed to get down the hill themselves and wound up rolling the chunks of cheddar ahead of them(also,for some strange reason,Chuck had loaded the sleds upside down).

They made it to the Pit Stop on time but had to wait out a 30 minute penalty before being checked in. Lucky for Team YouTube(Joey and Meghan)that they did,because that penalty saved their bacon. Chuck and Wynona went home instead and my best guess that their first meal back in the States won't be a cheeseburger: 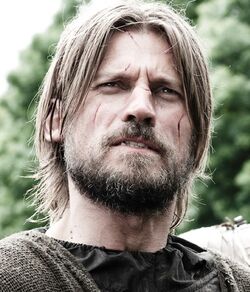 A lot happened on Games of Thrones last Sunday,as Arya parted ways with a friend,Dany struck a deal with a rude slaver for an army of The Unsullied and Tyrion had no choice but to take on new responsibilities.

Our main focus this time,however,went to Jaime and Brienne,who were captured by Rob Stark's potential banner men. Jaime had warned Brienne that the men would be abusing her sexually by nightfall and not to fight back too much. She naturally resisted that notion and those men as the time came yet Jaime dropped his usual manner of disinterest in the pain of others to help her out.

Unfortunately for him, Jaime overplayed his hand by pushing the head man in charge for other favors that included sending home to his father and a more comfortable resting spot. If he had just left off with his fib about the wealth of Brienne's family(which saved her physical virtue for the moment),all might have been well. Sadly,that Lannister pride and vanity lead Jaime to face some very hard truths and to lose a hand,something that a famed swordsman would rather die than live with:

There were some interesting parallels between Don and Pete this week on Mad Men as both men are conducting extramarital affairs close to home,not to mention figuring out to please a couple of tricky clients.

Don's entanglement with Sylvia,the doctor's wife only a couple of apartment floors away,has her more on edge than him. She and Megan shared a personal moment(where Megan told her about a recent miscarriage before telling Don)that gave her some serious qualms about continuing her fling. Don,however, seems contented with this outlet for his anxieties,no shock there,and pretty much talked Sylvia down from that ledge their relationship was about to go over.

Pete,as usual,came off as a sloppier version of Don as he used his NYC apartment to hook up with one of the suburban house wives in his neighborhood. That lady,alas,has a husband who viciously lashed out at her and Pete's wife Trudy gave her refuge from that domestic storm.

To her credit,Trudy laid down the law the next day and told Pete in no uncertain terms that he had to stay away or she would make him sorry. A divorce would be better for them both,in my opinion,but neither one of them is ready to go that extra step just yet. What is it with Pete and his bad karma with women? While he did earn a lot of it,you would think that he'd learn a few lessons from the master on successfully scoring on the side.

Some of this bled over into work,as the creep from Jaguar who insisted on a night with Joan as a signing bonus stopped in to throw his weight around regarding the ad campaign. Don cleverly sunk that battleship subtly,which ticked Pete off but once again,he was too slow to catch up there. Hopefully both of them will be on the ball as Heinz ketchup is in their reach but may slip away to Peggy's new firm. Wise up,boys or more than one fortune may be lost here:

THE VAMPIRE DIARIES: New episodes start tonight as the gang still struggles to find the missing vampire cure and deal with Silas but that doesn't mean prom dresses won't be shopped for: