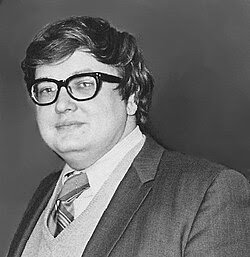 It was a sad day for movie lovers yesterday,as news of the passing of famed film critic Roger Ebert made it's way across the media landscape. His battles with cancer were well known and only the day before he had announced a "leave of presence" due to his declining health.

However,his perseverance in keeping up with the steady stream of films released every week,despite his physical condition, is a testament to his cinematic devotion. Ebert's movie mania was and is an inspiration that others over the years chose to follow whether behind the camera or in the audience,including this little blogger girl.

My first introduction to Roger Ebert was through his review show Sneak Previews,where he was teamed up with friendly rival in the Chicago newspaper arts section,Gene Siskel. The series was first aired on PBS stations around the country and many folks were delighted to find such spirited discussion(especially when they disagreed about a movie) about current films that was accessible as well as entertaining: 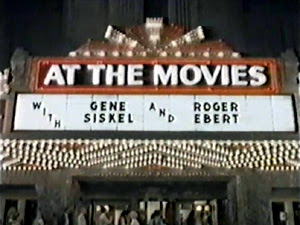 Soon enough,syndicated stations gave them a wider audience by creating At The Movies,which gave the fellas more room to work with on the reviewing front.

Ebert and Siskel did more than just highlight the new releases,which they rated with a "thumbs up/down" system,they also did special shows about classic movies and why they worked,features on promising new directors such as Spike Lee and Quentin Tarantino and trends in Hollywood that either pleased or irked them for good reason(I still agree with them about colorization):

After the death of Gene Siskel in the late 1990s, Ebert continued with his TV review show and had a rotating number of co-hosts before settling upon fellow Chicagoan Richard Roeper. While his partnership with Roeper wasn't as engaging as his prior connection with Siskel,it was still good to hear what Ebert thought about the newest releases at the multiplex that week:

In addition to watching his film views on TV, I also read many of his books about the subject and not just his yearly guides either. From humorous looks at movie cliches(Roger Ebert's Little Movie Glossary) and agonized takes on the worst in film(I Hated,Hated,Hated This Movie),plus tributes to the best in cinema(The Great Movies),Roger Ebert truly covered the waterfront here.

His most recent book was a memoir entitled Life Itself,which was well received by critics. It's no surprise that he was such a talented writer,given that he won a Pulitzer Prize for his work in 1975,the first in his field to do so. Ebert had the knack for making talk about art house films seem as casually clever as appreciation of more mainstream fare. 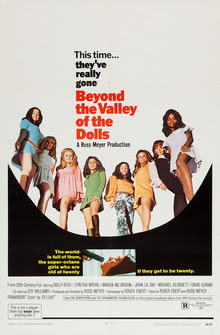 He also enjoyed a good genre flick as well with some experience in that department from writing the screenplays for  a couple of Russ Meyer B-movies,including Beyond the Valley of the Dolls(which is worth seeing if you're a sucker for camp) and Beneath the Valley of the Ultra Vixens.

Ebert also used his considerable clout to shine a light on independent and overlooked films(even holding a festival for them) and encouraging younger fans to check out their cinematic elders who paved the way for them:

Roger Ebert's departure from this life is of even more sadness to his family and friends,particularly his devoted wife Chaz and all of my sympathies and best wishes go out to her and those others who had such an amazing man in their lives.

Yes,he was a human being with flaws just like everyone else but not many of us use our time on earth to pursue what they most passionately love like he did. Roger Ebert did much to contribute to the appreciation of film along side such greats as Pauline Kael,Andrew Sarris and his former partner on the cinematic beat Gene Siskel.

He and Gene helped to pave the way for present and future critics both in print and online who take liberties with the standard quo and challenge all of us to want better from this medium of motion pictures than visual gimmicks and tired remakes. That didn't mean turning your nose up at popcorn fare or overpraising the artistic content of films that had little to truly offer in that arena. It meant that movies could only be as good or bad as we made them to be and that it was up to us to encourage the best in film.

I practically grew up with Siskel and Ebert as movie mentors(as I'm sure countless others did)and seeing Roger take his leave of the aisle seat for good is a sweet sorrow indeed. However,I have no doubt that he'll be getting a much finer view of the cinema in his new theater in the hereafter: