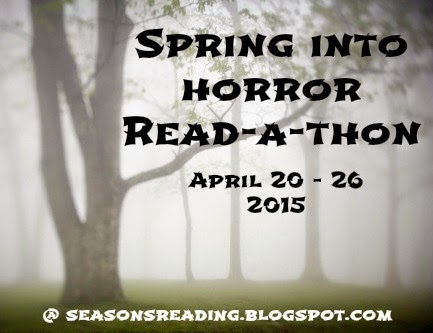 Next week, I will be taking part in Seasons of Reading's Spring Into Horror readathon(and yes, there is still time to sign up). The basic requirements are to pick something within the horror genre to dive into for a week and then talk about it online.

My theme is vampires, since it's been awhile since I sunk my teeth into that particular literary blood pudding, with one new title and one reread,plus a bonus of my own to offer my fellow readalongs:

I've been saving Dracula, My Love by Syrie James for just such an occasion as this. Syrie is best known to Jane Austen fans for her books such as The Lost Memoirs of Jane Austen,The Secret Diaries of Charlotte Bronte and most recently, Jane Austen's First Love, yet she also enjoys a good vampire tale as well.

In this novel, we see Mina Harker's side of the story, as she falls for the mysterious Count and finds herself torn between her beloved husband Jonathan and this tall,dark and deadly man. Getting a feminine perspective on this iconic tale sounds wonderful, not to mention the gorgeous gothic romance between our two leads:

If I have time enough,  Stephen King's 'Salem's Lot is a place that I will happy to visit once again. The setting and time period may be somewhat dated but King's premise of "how would Dracula set up shop in modern day America?" holds up rather well.

To my great disappointment, there hasn't been a decent adaptation of this story given to either readers or general fans. The 1970s miniseries was stiff and beyond hokey(plus, Barlow was presented as a Nosferatu knock-off) while the TNT miniseries from 2004 was smart enough to cast Rutger Hauer as Barlow yet quickly sunk into cheesiness, not to mention underused Hauer greatly.

I still think it could be a viable mini, provided that someone take the time to do it right. My suggestion would be to keep the original story line in the seventies, with a now older version of Mark Petrie passing the torch to a younger generation of hunters that keep the terror of the town from spreading to the outside world. Just my opinion,folks-it certainly would be better than that Return to Salem's Lot mess, that's for sure!:

The Seasons of Reading readathons offer prizes to their participants and this time out, one of those will be an e-book of my own. Fanny Price, Slayer of Vampires seem to be quite suitable for this particular one and a hopefully happy reader will be able to get a free copy, courtesy of Smashwords.

For those of you unfamiliar with the book, the story of Mansfield Park is retold via secret letters that Fanny writes to her sailor brother William about the growing danger from the double trouble duo of Mary and Henry Crawford.

Yes, the Crawfords are both sharp witted and sharp fanged here, with Fanny having knowledge of their deadly ways thanks to her keen eye and a set of books about supernatural lore that her departed Uncle Norris asked her to hold for Edmund. Can she save her Mansfield family from the Crawfords' clutches and still be able to keep Aunt Bertram awake during tea time?

I do try to mix a little humor with the horror here,as well as show a stronger side of Fanny Price who I believe is a vastly underrated Austen heroine. Alas, Mary Crawford does have many of the good lines and more than her fair share of the spotlight:


The Spring Into Horror Readathon begins on April 20th and ends on the 26th(the day after my birthday,an additional bonus for me!) and I hope many of you will join in the fun. You don't have to pick a vampire book,of course, but I do so recommend at least one of your choosing as they are my favorite flavor of evil:

Have you ever read Dracula in Love by Karen Essex? I really liked it. I think it came out right around the time Syrie's book did.

Thanks for joining me again. Enjoy the reading!

You're welcome, Michelle and happy to join in the reading fun. I haven't read Dracula in Love, so that's one to look out for!