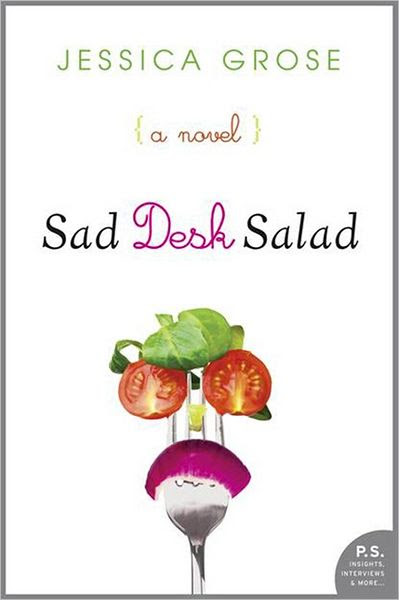 I've been having great luck with Library Thing's Early Reviewers program lately,which has send some interesting books my way. My newest win,Sad Desk Salad by Jessica Grose,arrived earlier this week and I just finished it this morning. This novel won't be out until October but I couldn't wait that long to share my thoughts about it.

The story takes place during a pivotal week in the life of Alex Lyons,a popular blogger for a women centric website called Chick Habit. While CH does do an occasional piece about social issues,Alex quickly realizes that the posts that generate the most attention are the ones she does about celebrity gossip or adding her special brand of snarky commentary on pop culture trends.

She's under a lot of pressure to crank out posts by the hour,not only from her demanding boss Moira who freaks out if Alex steps away from her computer long enough to eat and bathe,but her sister CH bloggers that maintain a steady yet warily competitive friendship with one another:

The insanely high quota for posts at Chick Habit put Alex in a daily frenzy which is not helped by the online presence of eager to help out new intern Molly and the arrival of a hate site entitled Breaking the Chick Habit,which seems to be targeting her a little bit more than the rest of the writers at CH.

After finding out that her boyfriend Peter's company may be involved with a corporate buyout that could threaten her job,Alex is somewhat pleasantly surprised to see an anonymously sent e-mail that offers her an instant solution to some of her problems.

The e-mail contains a link to a video clip that features Rebecca West, one of the golden girl daughters of a professional tiger mom turned politician, indulging in a sex and drugs romp. Such a juicy gem of gossipy expose is hard for most people to resist taking full advantage of and while Alex has a few qualms about it,she does post it at Chick Habit which pleases Moira but gives Alex a whole new set of dilemmas to deal with:

While the video goes viral and lands Alex a taste of instant celebrity herself,it also earns her some scornful disappointment from a few of her friends,plus an ultimatum from a mysterious source that demands the controversial clip be taken off Chick Habit by the end of the week or some of Alex's own dirty laundry will be showcased to the world.

As her personal and professional life is under fire from many directions,Alex has to resurrect her old reporting skills to track down her blackmailer,along with Rebecca West who has disappeared from both public and private view. With Alex having no choice but to leave the cluttered comfort of her computer screen, her immersion into the real world forces her to take a closer look at who she has allowed herself to become:

Sad Desk Salad is a first novel for Jessica Grose,whose previous experience as an editor at Slate and Jezebel gives her take on the hectic pace of the professional end of the blogosphere an authentic air.

The story is fast paced and furiously funny,with an insider flair that makes her satirical points hit home hard but not at the expense of her characters,especially her leading lady who has more depth and empathy than she cares to admit.

This is one of the best fictional looks into a pop culture realm since Michael Tolkien's The Player,in my opinion. Granted,the satire in SDS isn't as dark yet it's the smartly written savvy slap in the face that the meandering ethics of online publishing could use right about now.

Sad Desk Salad will be officially released on October 2 and I hope that it climbs the bestseller list as quickly as any Hollywood blockbuster. Thank you Library Thing for bringing this book to my attention and I hope that others enjoy the entertaining insights this engaging novel has in abundance: