The Words and other writers gone wild on film.

A movie that quickly came and went out of theaters earlier this month,The Words,had to do with a writer(Bradley Cooper) who publishes a hit novel that is merely a copy of another man's work that he found in an old briefcase.

Said previous owner of the briefcase(Jeremy Irons)had thought that story of his lost long ago and happens to connect with the now hot shot author. Despite some guilt ridden attempts to make this wrong up to him,the old man refuses to let the younger one off the hook that easily:

The core idea of the plot is loosely based on the classic anecdote about Hemingway's wife losing a suitcase full of his work in progress during their travels,something that many literary types love to debate about whose fault that was or did it even happen in the first place.

While I have no opinion about that(although I do think that Hemingway should've kept a closer eye on his own stuff there),it did occur to me that The Words isn't the only film out there that showcases writers in a less than flattering light. Here are a few other examples of authors with attitudes that would shock some of their readers and cause a few bookmarks to fall:

CROSSING DELANCEY: Izzy,the charming heroine of this romantic comedy(Amy Irving)happens to be a bookseller who finds herself being wooed by Anton Maes, a very prominent writer,particularly over a lunch date to set up a book signing.

However,when she invites him out for a meal,he insists on bringing along his assistant and the two of them make Izzy feel like a third wheel. This isn't the end of Anton's dubious nature but it certainly was a bright red warning flag for Izzy to notice there: 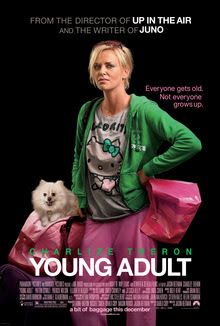 YOUNG ADULT: The leading lady of this less than tender tale is Mavis Gary(Charlize Theron),who ghostwrites for a no longer popular series of high school themed books and is about as mature as her target audience.

On her way back to her hometown(with the main goal being seducing an old boyfriend away from his wife and newborn child),Mavis stops into a bookstore where she is peeved to find her books on the clearance table. You can easily sympathize with that situation but her cranky insistence on making the books nonreturnable dilutes some of that empathy for Mavis' plight:

SHE DEVIL: Granted,Roseanne is the star of this wonky adaptation of Fay Weldon's dark social comedy,The Life and Loves of a She Devil,but Meryl Streep's portrayal of pretentious romance writer Mary Fisher nearly steals the show.

The whole plot springs from Mary's stealing the husband of frumpy Ruth,who then embarks on a fully planned out revenge on the two of them which leads to financial ruin and public humiliation. Mary and her prima donna pretenses make her the type of person that you eagerly enjoy seeing being brought down a peg or two:

THE SHINING: No look at writers gone wrong would be complete without checking into the Overlook Hotel with Jack Torrence,a former teacher and would be author seeking some literary redemption during his time as winter caretaker of the place.

However,when wife Wendy takes a peek at his work in progress,it's obvious that Jack is in more help than a standard writer's retreat can provide. You do have to give the man credit for the various fonts he used in crafting his madman masterpiece-that alone could get him a publishing contract in some circles,if he didn't take to murderous rampages,that is:

Don't get me wrong;being a writer is a laudable goal(especially since it's one of my own in this life)and while there are plenty of films that display the best side of that profession,it is good to also acknowledge that they're just people like everyone else.

Movies do exaggerate both of those qualities,as they do with most professions,but just as they say "don't believe everything you read",don't be too quick to discount all that you see either.

For every warm and wonderful greeting you may get from one of your favorite authors that you're lucky enough to encounter,there is also the strong chance that he/she may not be the same type of person that appears in their books or in their film adaptations. That's no excuse for ill manners,of course,but it does pay to be prepared because for some folks,that's as good as it gets: