A TAR Team earns an Express Pass,a second season of Upstairs,Downstairs and The Girl soon to haunt HBO

The second leg of The Amazing Race took the teams to Indonesia,where they had the opportunity to win the coveted Express Pass(which allows you to bypass any tricky challenges).

Twin sisters Natalie and Nadiya were the only ones to tackle the Road Block task that required setting up a stand in a local fish market(everyone else went for the ice delivery option).

They were able to place the stinky goods in the correct order on their first try and happily hollered for joy when awarded their prize at the Pitstop. These gals are very enthusiastic but rather loud to say the leas. However, I guess they have the right attitude for this race, so,congrats,ladies and keep up the good work!: 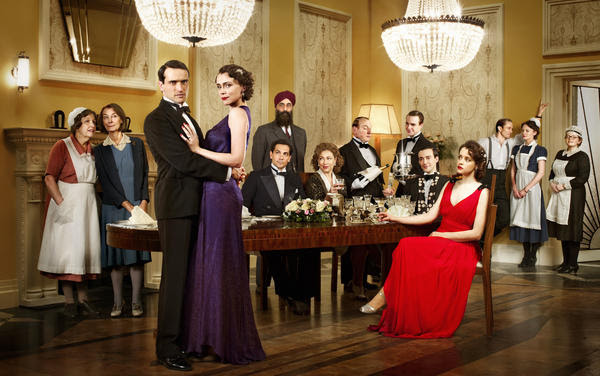 Season two of the revived Upstairs,Downstairs started on Sunday,with a lot of new faces appearing at 165 Eaton Place and several familiar ones no longer in place.

Sadly,due to health issues,Jean Marsh will only be seen briefly this time around and Eileen Atkins didn't like the way her character was written so Lady Maud has been killed off for this go-round.

In her place,Alex Kingston has joined the cast as Aunt Blanche,Maud's half sister who is just as opinionated and forthright as her elder sibling was,with plenty to say about the care and feeding of both Lady Agnes and her new baby daughter:

Other new arrivals include nursery maid Beryl,who has a dark past and kitchen maid Eunice,who seems nice enough. So far,the main focus is on the upcoming war which is causing folks to take precautions and opposing political sides.

The person who happens to be on the worst side of this spectrum at the moment is Persie,Lady Agnes' little sister still living in Germany. Her brother-in-law did attempt to take her home but was literally kissed off for his troubles.

Perhaps she might reconsider that ticket back to England with things getting pretty dicey in Berlin but Persie needs to cut out the flirting,seriously! Things are brewing up enough as it is without that:

Arriving just before Halloween,The Girl promises to be a chilling look at Alfred Hitchcock's intense relationship with one of his leading ladies,Tippi Hedren(Sienna Miller). Toby Jones plays Hitch,whose interest in Hedren goes far beyond artistic license and is not unnoticed by his wife Alma(Imelda Staunton).

Tippi Hedren starred in two of Hitchcock's films,the classic thriller The Birds and the psychological suspense drama Marnie. She also is the mother of actress Melanie Griffith and I recall hearing a story about a gift that Hitchcock gave to Melanie in her childhood;it was a coffin shaped box with a doll version of her mom inside.

I don't know if that little tidbit will make it's way into this film but it's certainly a sign of just how oddly morbid the man could be.

With Anthony Hopkins about to appear as Hitchcock in a biopic next month,Jones' performance is already up for comparison but I think that each one deserves to be judged on their own merits. The Girl debuts on October 20 and should be a real treat for movie buffs and horror fans alike:

THE WALKING DEAD: Speaking of scares,Season Three of this ghoulish drama starts up this weekend and maybe it's just me but aren't Rick and friends a little too happy about setting up shop in a prison? Oh,well,guess you can't be too picky about your accommodations during a zombie apocalypse: