There have been many biographies written about Jane Austen,both fictional and factual, that most newcomers to her life and times might find daunting while established Austenites might feel that there is no need to add another one to their overflowing collections.

However, in the latest Austen bio by Paula Bryne,The Real Jane Austen:A Life in Small Things, a sparkling new take on the material makes this book quite the must read for both sets of Jane Austen readers. Instead of taking  the standard chronological approach, Brynes uses everyday objects in Jane's life(as well as her characters) to talk about what may have influenced her choices in the personal and creative paths she took. 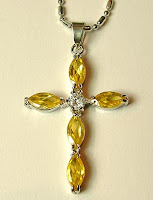 For example, a card of lace leads us into Austen's enjoyment of shopping in such places as Bath and London,as well as the less amusing subject of one of her relations being arrested for shoplifting just such an item and spending a brief amount of time in jail(Jane's mother offered to send both of her daughters to the distressed aunt as company during her incarceration but that was politely declined).

Well known possessions of Jane Austen come into play also,like the topaz crosses that were brought for her and sister Cassandra by their naval brother Charles,purchased with money earned during one of his campaigns at sea.

The British Navy and the impact that it had on society was a focal point for two of Austen's novels,Persuasion and Mansfield Park, with the cross given to Fanny in MP not only reflecting that generous gift given in real life but the true nature of the giver in both instances as well.

Jane Austen's health concerns(along with the accepted notions of the time period) are talked about in a chapter headlined by a bathing machine,popular at places such as Brighton where Lydia Bennet made her unfortunate choice of husband and political concerns regarding slavery in other countries is looked at through a portrait of a "Daughter of Mansfield."

Austen's playfulness with her nieces and nephews,plus the childish nature of game playing amongst her more grown-up characters is nicely highlighted in the chapter that opens with a box of letters,much like the ones used to pass certain secret messages in a pivotal section of Emma. 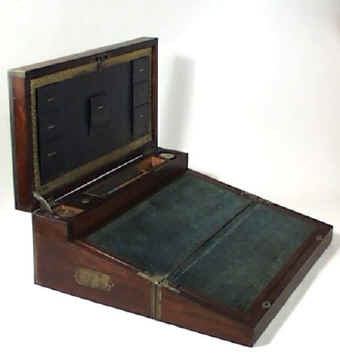 Some of the best chapters talk about Austen's writing career,with a royalty check from John Murray as the starting off point for her success at earning enough money from her published novels to allow her to continue onward with her work.

Another chapter showcases her laptop writing desk,that Jane received from her father when she was nineteen. It became as vital to her as the famous writing desk displayed at Chawton,for it was more than just a sign of his confidence in her talents.

That mini writing station gave her the mobility to take her work where ever her social and family obligations insisted that she needed to be and could be rightly seen as the Regency equivalent of the modern day laptop computer:

Paula Bryne is well familiar with Jane Austen's world,due in part to her earlier book Jane Austen and the Theatre,and that sure-handed ease with her subject makes the unusual set-up of this biography feel very natural and secure.

Bryne gives the reader a guided tour into Jane Austen's life and times that definitely takes the scenic route,making the trip seem fresh and new for established fans and allows those new to the Austen scene a breezy yet mentally stimulating look at her world.

The Real Jane Austen is available at a bookseller near you and whether you're in need of a refresher course or a proper introduction, this lovely book fits the bill. The subtitle may say "a Life in Small Things" but as this book proves,Austen's life was quite the widescreen wonder: