Welcome to the second installment of our Year of Freddy Fear(intended as a salute to the Nightmare on Elm Street series on it's 30th anniversary) and since Valentine's Day is on the horror horizon for this month, our feature film focus is on another Robert Englund role as a classic literary villain in 1989 's The Phantom of the Opera.

By this point,Englund was well established as Freddy Kruger,with the fifth NOES movie having been released earlier in August of that year. Phantom of the Opera was clearly meant to be a star vehicle for him but it became a real Thanksgiving turkey instead at the box office upon it's initial November release. 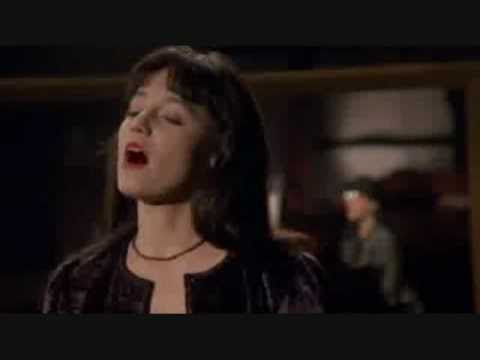 I suspect that a good portion of the problem that audiences had with this film is that it wasn't quite what most Freddy fans were looking with all of the opera singing going on and those into the Phantom finding it too gory for their taste.

The film tries a few interesting twists as it begins in modern day New York where hopeful singer Christine Day(Jill Schoelen) is searching for an unique piece of music to audition for a major part with.

With the help of her gal pal Meg(played by future SNL comedianne Molly Shannon), Christine stumbles upon  a set of burnt sheet music entitled"Don Juan Triumphant" that bleeds when she starts to perform it. You would think that blood sprouting sheet music would be a major warning sign that anyone would heed, but not our Christine there!

As she sings at the audition, a stage accident knocks her out and via a shattering mirror, Christine wakes up in London during the 1800s and seems to be reliving a past life where she was also a potential young singer under a mysterious mentor. The past life/time travel motif crops up during the end sequences of the film and it's not a bad concept yet it's not as well developed as it could've been:

The majority of the film takes place in the past,as Christine's rising career is given gruesome aid by The Phantom,aka Erik Destler,a composer granted somewhat supernatural power to create beautifully memorable music but cursed with a brutally scarred face.

Instead of the typical mask, this Phantom sews flesh(presumably from his victims) onto the molten sections of his face and with the additional help of theatrical make-up, is able to make semi-public appearances in order to promote his protege such as visiting a critic who gave her a bad review(at the urging of the theater owner played by a pre-Underworld Bill Nighy) at a local spa. Erik is quite the smooth talker but really doesn't like to take no for an answer as that snooty writer found out the hard way:

As the Phantom's kills get more outrageous(he loves loping off heads!) and his deadly intentions towards Christine become all too clear, our maiden in distress starts to fear her "angel of music" and clings to her boring suitor for protection.

Schoelen was pretty much the go-to girl for generic heroines around this period, making prior appearances in such genre fare as 1987's The Stepfather and 1989's Cutting Class,with later starring roles in fear flicks like Popcorn(which is actually a fun little movie) and When a Stranger Calls Back. She's a decent actress but her whole performance is pretty much girl tied to the railroad tracks(even the fight back moments that her modern day counterpart has are far from convincing).

While Englund gives this part his all, Schoelen's blandness doesn't give him much of an opportunity for a real give and take between the characters. She does well enough with the role but a more nuanced actress might have been a better choice in terms of giving the villain a formidable match:

The main flaws of the film,however, can not rest on Schoelen's shoulders. Other plot problems include no real explanation of how Christine ever came into the Phantom's sights in the first place and many of the death scenes are such over the top gore that attempts the tone of a Hammer film but makes no overall sense in story telling terms.

One prime example is a sequence where Erik buys himself a lady of the evening(who he insists on calling Christine) and then afterwards,is followed by a band of ruffians into a dark alley where he makes quips and carves them into pieces. How does that fit into the main story, you might ask? Well, it really doesn't, other than to keep horror fans looking for typical Freddy jokey kills in their seats!

As the body count grows and Christine goes missing, a team of police(along with Christine's real boyfriend) goes into the Phantom's underground opera lair search of them and our boy Erik has fun hunting them down while trying to keep his reluctant love interest at his side. Things had been falling apart by this point and they just tumble right down into a melodramatic mess:

Don't get me wrong,there is entertainment value to be found as Englund really has a romp with this character and the twist with the modern day versions of Erik and Christine towards the end had some promise but was quickly blown up into a grisly cliche reveal that went nowhere fast.

I did see this when it first came out in theaters and upon viewing it again, don't find myself having too big of a film experience from it. Englund's Erik does share a few physical traits with Winslow Leech in the 70s incarnation of Phantom of the Paradise but even that movie was more subtle that this half hearted horror show. Basically, not a bad movie but not a great one either.

Tune in next time when we head back to Elm Street and check out Part Two: Freddy's Revenge. As for the Phantom, I wouldn't recommend it for a Valentine's Day date night viewing unless your intended lover is into all too real blood lust:

I very dimly remember this film, although I do strongly support your celebration of this anniversary. Robert Englund is a perfectly-good actor, and Freddy is the s--t.

There are few horror films that I love and revere as much as Nightmare on Elm Street, and I have to praise Englund, because he is just as good at being "terrifying Freddy" as he is at being "pun-tastic, wise-cracking Freddy." You can catch Englund in bit parts of a variety of films and TV series, and he is never ever a weak link.

Thanks,Thaddeus-this movie sort of came and went back then,so it's understandable that you wouldn't remember it.

It does have it's charms,mostly in Englund's performance,and I do agree that Robert Englund is one of the best horror movie actors of our time. I remember first seeing him as a timid alien in the miniseries "V" and have been a fan ever since.