Sharing some awkward moments at the Thanksgiving TV table

We're about a week or so away from Thanksgiving and while food, family and football games are a large part of that holiday, another classic staple is a bit less than savory.

The possibilities for old tensions and new to arise at the dinner table is quite the time honored tradition and let's face it, folks, this year promises to have an exceptional number of those close encounters.

However, such awkwardness is not inevitable and with the help of some of our favorite TV shows, we can learn to laugh them off(or least, cope with them better). So, enjoy this TV tasting menu of Turkey Day turmoil at the table:

DINNER WITH THE DANVERS: As it turns out, not even Supergirl can leap tall buildings to avoid family feuding. While Kara was happy to have her foster mom and work buddy Winn(to make it a Friendsgiving) over for Thanksgiving, big sis Alex was not in a festive mood there.

Mad at her mother for seemingly putting Kara first, Alex was on the way to Tipsy Town by the time the food was ready. With Kara adding a last minute blast of heat vision to warm up the main course, that only added fuel to the fire Alex was stoking. Fortunately, they all had a super villain to battle before dessert but things did get patched up in time for leftovers:

THE BARONE BATTLE OF THE ENTREES: For her first solo Thanksgiving, Debra on Everybody Loves Raymond wanted to make her meal as distinctive as possible from her mother-in-law Marie's beloved holiday feasts.

She went so far as to have fish as the main course, figuring that it would be best not to directly compete with Marie on the turkey front. That didn't stop Marie from bringing over a turkey that day, "just in case people want to eat!" The two choices of protein did make the dinner better, especially since there were some unexpected guests to the dinner party: 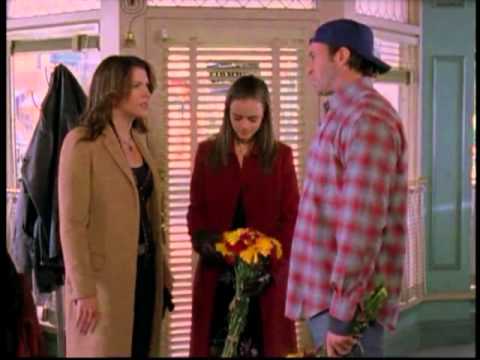 A FLAVORLESS KISS FOR RORY AND JESS: In the classic Gilmore Girls episode, "A Deep Fried Korean Thanksgiving", one of the four stops for Lorelai and Rory was,of course, Luke's Diner.

Since this was also at the start of Rory's relationship with Luke's nephew Jess, kissing in public was something she wasn't too comfortable with.

The smooch that they did exchange was bland enough for Lorelai to comment on, with an extra sharp observation from Babette who was one table over. Fortunately, Kirk had nothing to add as he was still recovering from his bout with his cat named Kirk(yes, he did name the cat that on purpose): 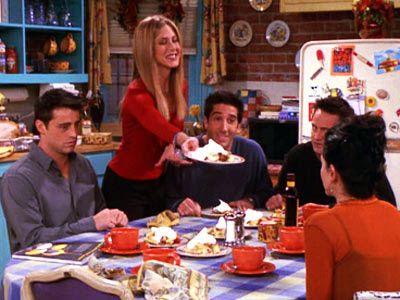 THE TROUBLE WITH TRIFLE: On one of the Thanksgiving episodes of Friends, Rachel wanted to impress everyone by making the dessert and not just any dessert; an English trifle.

Problem was, she mixed up two recipes which turned her dish into a hideous hybrid of shepard's pie and trifle. Not wanting to hurt her feelings, the gang did their best to deal with this dessert disaster.

While Phoebe had the best excuse for not tasting it, the rest of the guests found rather creative ways to stomach that tough tasting treat. Oddly enough, Joey was the only person who actually enjoyed each and every mouthful:

So, as you can see, Thanksgiving does bring it's share of good flavors and feelings along with the taste of tension but a good dose of laughter and love can balance that out. My best advice for your real world holiday dinner dealings is to find something that everyone can safely agree upon. A favorite movie, board game or a wonderful song should be able to lighten any moodiness and make your meal time a happy memory to cherish for the future: