This is a big week for fans of the small screen DC superheroes as the CW is airing a set of four crossover episodes with the collective title "Heroes Vs. Aliens".

This tie-in quartet started last night with Supergirl and will pick up this evening with The Flash, followed by Arrow and DC's Legends of Tomorrow.

As someone who watches three out of the four shows(I'm too far behind on Arrow to catch up), this is a whole lot of geeky fun. To further enhance the joy, I've gathered together a few other superhero team-ups from the past to present for your viewing pleasure:

CHALLENGE OF THE SUPER FRIENDS: Out of the three cartoon incarnations of DC's Super Friends(aka The Justice League of America) on ABC's Saturday morning line-up back in the day, this one is definitely my favorite.

Pitting the JLA against their worst enemies united as the Legion of Doom(run by Lex Luthor, of course) was great for all sorts of elaborate schemes and story lines, not to mention introducing a number of lesser known characters to young audiences.

I first learned about heroes like Black Vulcan and Hawkman on COTSF, along with villains such as Giganta,Cheetah and Gorilla Grodd. Since there may be a Legion of Doom forming on the current series of CW shows, a re-watch might be in order,folks: 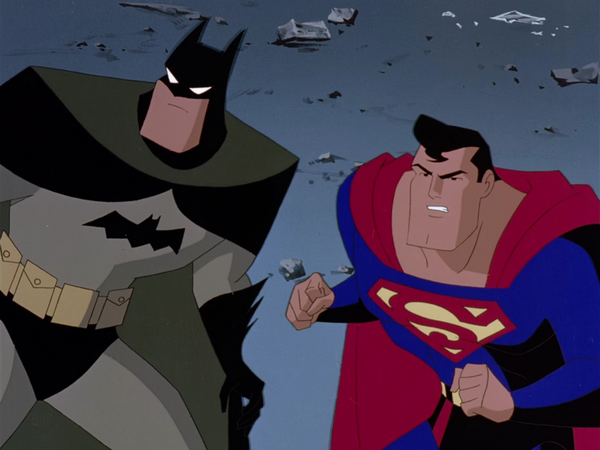 WORLD'S FINEST: While many of us were disappointed with a certain big screen match-up between Batman and Superman, there is fortunately a viable alternative, thanks to the folks behind both the Batman and Superman animated series.

This special two part episode can be found on AM:TAS and at first, both of our heroes are less than impressed with each other.

Soon enough,however, they quickly learn to work together to defeat the mutual threat posed by the Joker(with an assist from Lex Luthor) and even get over the potential romantic rivalry over Lois Lane. It's too bad that Hollywood doesn't use the talents of the writers from those series to create better live action versions of these iconic characters:

THE AVENGERS: As DC has been slow to get it's act together on the silver screen,except for Batman,Marvel has been rightfully ruling the roost on that cinematic front. I think it's safe to say that a key gem among their crown jewels was formed by bringing this ultimate team-up to live action life.

It helped greatly that many of the characters were introduced to film fans via their own solo stories before being brought together as one band of brave souls ready to defend the world. Granted, we're still waiting for that Black Widow movie but in the meanwhile, just listening to the assemblage of  Avengers is enough to make even the mightier Big Bad quake in their boots :

MYSTERY MEN: Yes, this rag tag crew from the cult comic book The Flaming Carrot are meant to be a joke but it's one that can still get a few well earned laughs there.

Their 1999 film debut is also a cult favorite and while some of their powers are not quite effective, when they do get together to fight the local bad guys, this motley crew can be a force to reckon with:


This CW crossover event will not be the last, as there is word of a future Supergirl/Flash episode that will be a musical one and with the original Wonder Woman Lynda Carter on board as well! In the meantime, let's enjoy this early Christmas present from the combined forces at work here(DC, The CW and the Joss Whedon of our time, Greg Berlanti) and rejoice in the superhero goodness that will hopefully get through the end of this particular year: