Arranging a fearful bouquet of Spring Into Horror reads

I know we're in the midst of March but since the sign ups for April's Spring Into Horror readathon(hosted by Seasons of Reading's marvelous Michelle Miller) have already begun, my sinister spring time reading pile must be made.

Truth be told, I've been planning this one since the start of the new year, as relief from the almost daily horrors being reported(my deepest condolences to the good people of New Zealand and in particular Christchuch) is most keenly needed.

This is not to say that reality should be avoided but a break from the relentless torrent of awful events on the news is necessary in order to recharge your emotional batteries and be prepared to deal with what lies ahead. While you don't have to read only scary books for this readathon, I do like to reconnect with that fear factor in many frightful flavors, like a layer cake that features more than one taste of terror:

INTO THE DROWNING DEEP: I've heard of Mira Grant before, with such scary subject matter as zombie novels like Feed and sci-fi fare such as Parasite. This ,however, called to me in the manner of a deadly siren with two words: killer mermaids.

Years after a crew of mockumentary film makers went missing ,complete with found footage that strongly hints at the source of their demise, a group of scientists lead by Victoria "Tory" Stewart are being financed by the very same sci-fi themed TV network that arranged the first deadly voyage to cover the same watery territory in search of answers.

While Tory is personally motivated(her sister Anne was a member of the earlier doomed crew) as well as professionally, others aboard have less than scientific goals such as a pair of big game hunter types eager to trap and taste a mermaid,plus Dr. Jillian Toth, looking to validate her theories about the legendary maidens of the sea but at what cost?

This book sound like a lot of good gruesome fun, in the manner of many an underwater creature feature,yet with some engaging character development and a solid use of imagination not always to be found in similar Hollywood fare. Of course, the real bookish bait for me is the whole "killer mermaids!" concept and yes, I'm already hooked:

FIONA BARTON AND HER KATE WATERS SERIES: When it comes to readathons, I do like to include a reread and here, my choice is Barton's debut novel The Widow yet I will be reading for the first time, her follow-up entitled The Child.

Journalist Kate Waters appears in both books and in the latter, she's looking into the story of the discovery of the skeletal remains of an infant at a construction site. This sad find also intrigues two other women, one, a book editor who may know more than she wants to admit to anyone,especially her college professor husband.

The other is an ex-nurse, who lost her job due to suspicions over what happened to her newborn daughter supposedly taken from the hospital. As Kate connects the dots as well as the two women possibly linked in this tragic puzzle, the true picture of who this child was becomes chillingly clearer.

Barton displayed quite the compelling tone in that first book that makes me want to continue onward with her work and while her Kate Waters stories don't have to be read in order(yes, I do have the latest entry, The Suspect), I think that my appreciation of this particular character will grow stronger if I do directly follow her fictional footsteps: 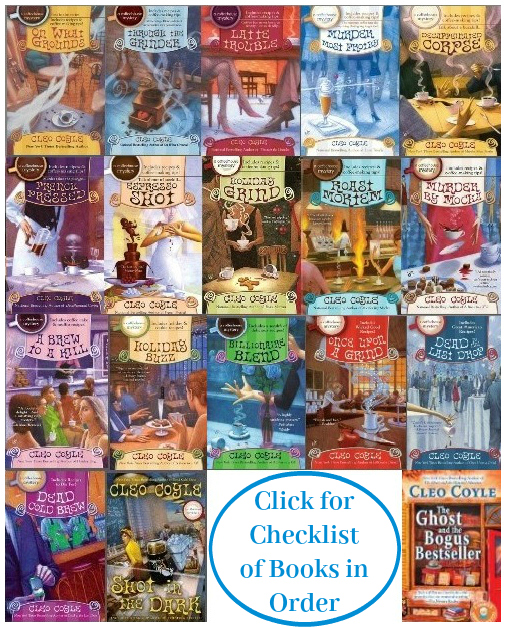 COFFEEHOUSE MYSTERIES: On the other hand, sometimes reading out of order can be a good thing. Last year, I enjoyed Cleo Coyle's Dead to the Last Drop, the latest in her growing series of cozy coffee themed mystery novels and decided to take the literary plunge by snapping up the first four books in the series.

For this readathon,however, I only intend to taste test the first three books: On What Grounds, Through the Grinder and Latte Trouble. These stories are centered around Clare Cosi, a divorced single mom who manages a coffeehouse in New York's Greenwich Village section with the help of her ex-mother-in-law.

When murder lands at her doorstep,or the back of her restaurant kitchen, Clare is on the case with the aid of Lt. Mike Quinn, a homicide detective who isn't always willing to have the extra assistance. Clare's considerable charms and her knack for finding the course of trouble do win him over in the long run there.

Funny thing is, I am so not a coffee person(total tea drinker) yet I do appreciate the aesthetics of that beloved brew indeed. No doubt that I will read book four,A Murder Most Frothy, at some point but in this instance, I didn't want to risk getting such a major literary caffeine rush :


Spring Into Horror begins on April 1-no joke-and lasts until the 30th and there's still plenty of time to join in for the fearsome fun. One of the things that I really like about this readathon is that just one scary book is required and it can be from any genre as your fright mileage may vary.

From horror tales to tension packed thrillers and even a cozy mystery, all are welcome in this page turning welcome to spring and it's promise of warm weather. As for lingering chills, a good Gothic story should deliver those delightfully dreadful goods  as even Miss Jane Austen would recommend. Yes, that lady liked a solid scare or two as her wink and nod to the genre in Northanger Abbey shows and if it's good enough for the creator of Mr. Darcy, it can be for you as well: