My luck with Joe's Luck at Galleycat 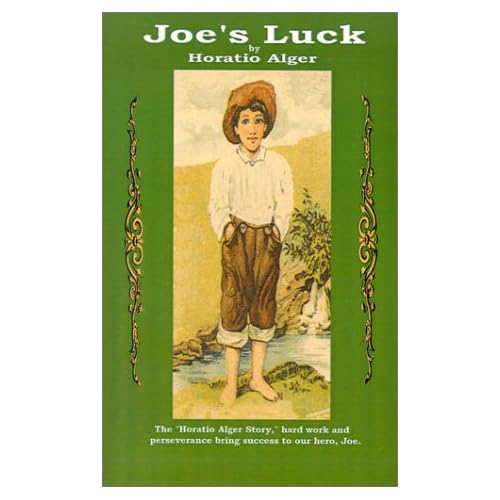 We interrupt this pop culture news feed for a breaking personal story; Awhile ago,it was announced at the literary website Galleycat would be holding "The World's Longest Literary Remix" contest,that would give interested folks a crack at rewriting a page from a forgotten work of Horatio Alger,called Joe's Luck or Always Wide Awake,in any manner or style that they chose.

The point of this was to create a college of creativity that ultimately result in a special e-book version of this public domain title,not to mention a number of prizes for several participants including a nifty little gift pack from the folks at Quirk Classics. Eager to seek a new writing challenge, I threw my hat into the ring and got more than I bargained.

Some of you out there may be saying at this point"That's nice for you,Lady T,but who the heck's Horatio Alger?" Well,to sum it up in short,Horatio Alger was an American author from the 19th century who was best known for writing pulp fiction novels aimed at a young male audience.

He's credited with bringing about the rags to riches genre in American writing,aka "poor boy makes good in the world" that influenced the likes of F. Scott Fitzgerald and Hunter S. Thompson. You can also count the films of Frank Capra in there as well,in my opinion.

Alger's work was mostly over the top in terms of story telling and became unknown to mainstream audiences as the decades passed but his literary legacy managed to leave an indelible mark on the pop culture scene,nonetheless:

That dime store novel vibe made Joe's Luck a good pick for Galleycat readers to work their imaginative wiles upon. Interested parties were given a link to an online edition of the book to read and request a section from the story to rewrite.

Most of the contestants had only one page to work with and there were plenty of interesting concepts played out within those boundaries. One person had a Willy Wonka tone to his piece and another used the Wizard of Oz as her muse. One of my favorites was the "What Would James Ellroy Do?" page that gave a neat L. A. Confidential twist to the proceedings:

As for me,I was given a whole chapter. The section of the book that sparked my imagination is the third chapter titled "The Soiled Suit." The hero of the book,Joe,is offered by his clueless employer Major Norton a set of ruined clothes from his son's wardrobe(said son hates Joe,mainly because even while walking around in rags,Joe still has the prettiest girl in town by his side).

Joe refuses to accept the suit,due to it being too small for him and covered in acid stains as well. This had me picturing a certain time traveling phone booth entering the scene,containing a band of futuristic reality show fashionistas looking for a suitable subject to comment on while being on camera. Here's a little excerpt to give you an idea of our intrepid show biz stylists in action:

*PAUSE-both Joe and the Major are frozen in place, as the stylish stranger points and activates his device, then turns to knock on the booth door and gestures to someone still inside.

Several someones are inside and make their way out into the room, including a small hovering orb whose use is to be a video recorder of the events.

The other occupants of the booth include a rather masculine featured woman clad in a hugely adorned blonde wig while wearing a dress of shiny gold that has tiny flashing lights on the bodice which extend to her short ruffled skirt, a clear glass jar holding a shriveled patchwork brain rolled out on a self moving cart and a robotic hand, also hovering unsupported, carrying an oversized version of a traditional lady’s perfume atomizer.

The gentleman who first appeared adjusts the microphone stem attached to the wire rim glasses implanted on either side of his head and taps a button on the incredibly small panel soldered to the shiny plate of metal that makes up his jaw. He appears to receive the response he desires and takes his place in front of the recording orb. He then begins to speak:

“Hello, everyone and welcome to another fabulous episode of Timeless Fashion, the show that seeks out style choices in all reaches of the space-time continuum. As always, I am your host, TGunn 9000, the latest cyber clone of the wondrous He Who Decreed Make It Work. Joining me on this gorgeous galaxy quest is the lovely five time winner of Drag Diva Supreme, the enchanting Miss Amber Dextrous…

*Ms. Dextrous steps forward and blows the orb a kiss*

…our two for the price of one pairing, the remaining halves of the brain cells that once belonged to famed Red Carpet correspondents and comediennes Joan and Melissa Rivers…

*the brain jar moves over, with two voices from the transmitter attached to the lid being quite audible, repeating the same sentences over and over:

…And last but certainly not least, everyone’s favorite colony of nanobots fueled by celebrity designer perfume, our very own Britney Beyonce Kardashian!”

*The robotic hand takes center stage and squeezes the bulb of the atomizer, sending a cloud of bizarrely bright pink essence in which tiny sparkling dots are visible into it’s glass chamber.*

“Okay, everyone, gather around”.*TGunn waits until his companions are properly assembled next to him within full range of the recording orb to start up again.*


“Now, as we and our regular viewers all know, our mission is seek out remote moments in time where crucial life changing fashion decisions are made and through our advanced technology and sense of style, determine whether or not we should intervene or simply observe.”

“Our challenge today takes us far into the past, where young luckless Joe over here (the orb swivels around to get a close-up of Joe) is at the crossroads of a major fashion dilemma as his need for new clothes is about to be badly met by his employer, Major Norton, who certainly could use a bit of a makeover himself there."

Amber speaks:” TG, my psychic senses are telling me that Joe’s desire for a new wardrobe is motivated by more than just not being able to afford a good tailor-there’s a young lady in the picture that our boy wants to dress to impress as well!”


If you're interested in seeing more,the full e-book edition of the Galleycat Remix is online at Scrid.com(yes,it's free)and while I never expected my first published work to appear in an e-book,it's still a honor to be part of this amusing literary experiment.

While I wasn't a recipient of any of the prizes,this was a rewarding experience that I hope leads to bigger and better things in my hoped-for writing career. Galleycat plans to hold another remix challenge this August that I've already signed up for and I'm also on the lookout for other writing contests as well. This isn't the only publishing path being taken by me but every bit counts as you head for the finish line there.

I know this is a small achievement but I did want to share this good news with my faithful blog readers(and thank you for checking in,I do really appreciate it). With any luck,perhaps someday I will have an official book of my own to promote and offer up to eager reviewers as a giveaway. I'm a long ways away from that day but in the traditional Horatio Alger style,some hard work and persistence may pay off for me and those who give me their love and support along the way:

Labels: About Writing, books and reading