I know it's still just June but there are already a crowd of contenders for the title of Song of the Summer 2010 forming lines and desperately trying to get everyone's attention.

Not being always in tune with the new music,I checked out a few of them and found to my delight that quite a few of them owe their lyrical style and/or background beat to some great pop songs of Summer Past. For your listening/viewing pleasure,here are three of the major musical acts out there who are bringing the new wrapped up in the glory of the old: Alejandro/Lady Gaga: Truth be told,I have been enjoying this song long before the video finally came out,so I am a tad predisposed to love it. The song itself is a gorgeous arrangement of melody and lyric that successfully evokes power mixed with sorrow and desire all at once.

While I can fully understand that the video may not be everyone's cup of tea,it certainly is memorable and speaks to what was in Gaga's mind when she created the song. Many will say that Alejandro echoes Madonna but I find the thread of inspiration to go further back than the heyday of the Material Girl:

Others like myself will hear the chords that ABBA brought forth decades ago,with the likes of "Chiquita" and in particular,"Fernando",in blending a Spanish operatic style with mainstream pop. Gaga's not as sentimental as ABBA was,perhaps,but they both share a soulfulness in their seemingly straightforward ballads:

California Gurls/Katy Perry: Yes,that is a deliberate misspelling as Katy attempts to shock us all yet again by dancing around clad in short shorts and whipped cream pie tops while Snoop Dog struts his usual stuff. Her recent live performance at the MTV Movie Awards of this ode to beach life for the ladies was a little more scaled down than the official video but you get the picture pretty quick:

In a weird way,all of Katy's jumping about and jiggling reminded me of an old school one hit wonder that also had a beach setting and sugary treats as props. Bow Wow Wow's "I Want Candy" was fun and funky,with more subtle sexy hints to the lyrics than anything Katy has ever penned so far. Maybe she should take a few tips from this tune and see how even a flash in the pan could bring the heat without the excess grease: 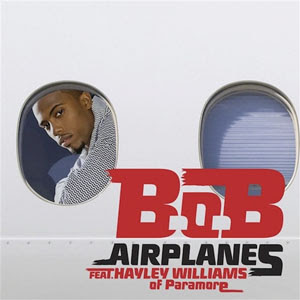 Airplanes/B.o.B. with Hayley Williams: This guy is new to me,but after listening to this song that he performs with the lead singer from Paramore,he's one to watch out for. B.o.B. has a excellent pace with his fast fluid rhythms and Hayley's lyrical asides compliment his vocals nicely:

B.o.B puts me in mind of Will Smith,in his best laid back songs like "Miami" and "Summertime" that showcase his eloquent ease with music far better than most of the over the top tunes and movie theme songs he later was known for:

Time will tell who comes out on top as the winner of the Summer Music wars but no matter the victor,it's up to you to manage your music planning for those car trips or other outdoor activities on your vacation calendar.

Sure,you could take a chance and hope to find a blast from the past on your radio dial,however,fate sees that as a opportunity to plant unwanted ear worms as pop culture punishment for your carelessness-you have been warned!:

Alejandro isn't one of my favorite Lady Gaga songs but it's still good and a lot better than some. I'm not too crazy about California Gurls though. I'm sure not many will even remember it in 10 years. The music video is neat looking though. I haven't heard B.o.B before which isn't surprising since I avoid much rap but Airplanes wasn't half bad.

I just don't like most of today's new music.