Stop by the Bad Movie Month trailer park to check out this summer's terrifying theme!

Some of you out there may be all familiar with the LRG official salute to schlocky cinema we hold each August but for the newcomers in the audience,let me introduce you to Bad Movie Month. Each Friday in August,a post is dedicated to highlighting the low points of a particularly awful film for well deserved mockery.

Why August? Two good reasons;A)there are no major holidays in that month,so we need something to fill up the time til Labor Day and B)August is one of the prime dumping grounds for crappy movies to come out in,next to midwinter,of course.

This year,we're going to do something a little different-Bad Movie Month will now have a thematic thread that connects all of our selected features together. We'll start this party off with Terrifying Teens,a set of supposed to be scary flicks about those crazy kids and their killing ways.

One of the first to be chosen for this dubious honor is Wes Craven's Deadly Friend,a movie that I not only remember seeing at a theater near me but also read the novel upon which it was based upon.

Future vampire slayer Kristy Swanson stars as Samantha,whose budding bond with the geeky boy next door(Matthew Laboteaux) ends in disaster as his scientific experiments intended to save her life turn his best gal pal into a one girl killing machine. Wes Craven has made many modern day classic fear films but his share of stinkers is nearly dead even there:

Our next film I happened to catch on cable,sparing me the buyer's remorse of paying good money to see such a terror tease as The Haunting of Molly Hartley.

Haley Bennet is the leading lady of the title,who is not so much being haunted(which I associate with ghosts)but is being hounded by supernatural forces and all too human ones,like her dear old mom who tries to kill Molly to "save" her from the dark destiny that awaits her on her eighteenth birthday.

This movie has a real CW tacky teen show vibe,which explains the casting but not the total cheat of the ending(more than that in good time,which will be very spoiler laden,you have been warned):

Speaking of bad vibes,Jennifer's Body had plenty of them on display,along with sexy sinister shots of the newly crowned winner of the Box Office Poison award this past weekend,Megan Fox.

From what I read in the many reviews for Jonah Hex,the blame for that cinematic bomb can't be entirely placed on her shoulders;everyone involved did their fair share of time wasting on that project.

However,having this tale of a demonically possessed mean girl treating all the boys in class like lunch meat literally on the list means I have no choice but to watch it. It's the only way to really do justice to ripping this trying to be trendy bag of tricks apart: 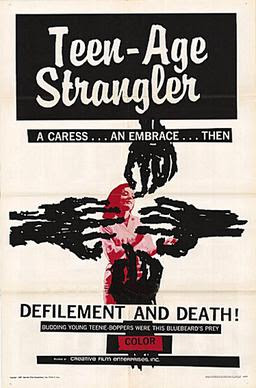 Last and possibly least is Teenage Strangler,a 1964 cult movie gem that has among it's many delights a whiny kid brother named Mikey,a bad impromptu dance number at a diner and numerous adult actors trying to pass for under 21.

We will be covering the Mystery Science Theater 3000 edition of this sad little film,which makes it much more fun to watch. I did manage to track down a clip of the original trailer(thank you,YouTube!)that demonstrates just why the MST3K crew hauled this bad boy out of the back room to reveal in it's stupefying splendor:

Well,folks,I hope you like what we have on the Bad Movie menu this season and please feel free to offer up suggestions for any other worthwhile wincing films for future BBM fests or themes for next year. Also,we are willing to add a couple more movies to this series,provided that video clips are available for embedding and I can stand to watch it(my only prerequisites for picking the movies here).

August can be a dreary month,so it helps to have something to look forward to even if it's a cheesy blog series. None of the bad movies ready for the LRG chopping block,however,will be as frightening as the blue menace threatening to hit the multiplexes around the same time(in 3D,no less! The horror,the horror...):