A pair of unlikely alliances on GOT,a sad departure from TAR and a night of Mad Men revelations

The shadow creature birthed at the end of the last episode of Game of Thrones served it's purpose this week,as Lady Stark and Brienne were the lone witnesses to the assassination of Renly Baratheon. Unfortunately,both ladies were blamed for the would-be king's death so they had to make a run for it.

Their escape gave each woman time to ponder their move,which for Brienne was mostly about avenging Renly's murder. However,she decided not only to take Lady Stark's advice regarding that issue but to pledge her services to Catelyn as well.

This new bond between them should prove to be useful for each of them as war fare rages on in Westeros(and there's no sign of that ending any time soon!). It's a sort of mother-daughter connection that they truly need at this juncture:

Speaking of daughters,meanwhile Arya is managing to keep her place as Tywin's cup bearer at Harranhal without letting too much of her fury towards the Lannisters being on full display. One of her good deeds is coming to fruition as Jaqen(one of the men trapped in the cage during the trek towards the Wall)expresses his wish to repay her for saving his life and those of his fellow captives.

As "only death can pay for life",he offers her the elimination of three of Arya's enemies. To test drive this bargain,Arya selects the Lannister torturer known as The Tickler and she is well rewarded indeed. This deadly deal is going to lead this particular young lady of the house of Stark down a very intriguing path,mark my words: 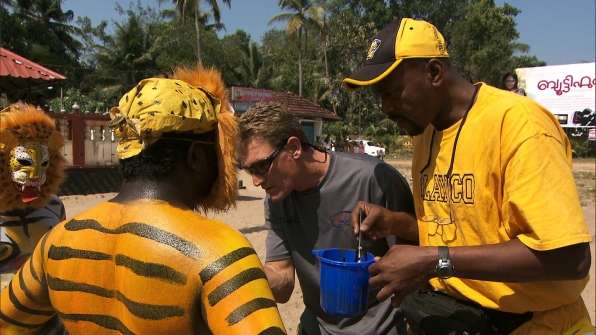 On The Amazing Race,Team Kentucky(Bopper and Mark) made their best bid to reach the finale but even with a Fast Forward at their disposal,the guys still came in last place.

Seeing such goodhearted friends,who truly looked out for each other and avoided a lot of the pointless drama,have to go home is such a shame. They did at least win one First Place prize and if Team Border Patrol(Art and J.J.)honor their promise to share some of the money they earned at one Pit Stop with Bopper and Mark,that will help to cut some of their loss.

The TAR finale is a two hour presentation and without Mark and Bopper,hard to root for the remaining four pack. Just as long as Team Big Brother and Team Border Patrol don't win,I'll be happy with either Ralph and Vanessa or Dave and Rachel crossing the finish line first. It would have been nice,though,to see Team Kentucky get that shot at the home stretch: Things were appearing to be pretty rosy on Mad Men for Don and Megan,as their team effort to save the Heinz account was a roaring success,with Megan being able to take her fair share of the victory pie.

That was followed up with an awards banquet for Don,to which Roger,Sally and Megan's visiting parents attended. Everyone got a lot more than they expected at this shindig,as Megan had a chance to talk with her father about his true feelings about her marriage and Don discovered just how the business community really feels about him.

The one who really had an eye opening experience was Sally,as her trip to the ladies' room gave her a full view of her step grandmother and Roger getting better acquainted,in the blunt sense of the term. Poor kid,what a way to be introduced to that! Granted,she was going to come across something sexual amongst the adults around her sooner or later yet that little incident is clearly going to haunt Sally for the long run. Guess disappointment flavored pudding was on the dessert menu at this party:

DESIGN STAR:The seventh season of the HGTV competition show is set to start soon,with a blast from the music scene of the 90s past making a guest appearance. Vanilla Ice,who has a home repair show on the DIY network,will be stopping by at some point to guest judge and that alone is reason enough to check this out: