Some observations about this year's Oscar nominees

Yesterday morning,many movie fans were wide awake at an early hour to watch the live announcement of the nominees for the 85th annual Academy Awards and I must say that host Seth McFarlane and actress Emma Stone were very amusing in their presentation.

There was the usual amount of expected contenders getting the nod but there were also a few surprises as well and for once,a decent amount of Best Song selections. With these cinematic choices still fresh in mind,here are my initial reactions to this year's Oscar hopefuls:

While other films did scoop up a decent amount of nominations such as The Silver Linings Playbook(8)and Life of Pi(11),Lincoln is clearly the front runner and there is no doubt in my mind that Day-Lewis will be adding another Oscar to his collection of awards.

Part of the reason for the movie's strong connection with audiences,in my opinion,is the longing for strong leadership during turbulent times,something that many people don't feel is present in our modern day world at the moment. Perhaps the success of this silver screen history lesson will resonate beyond the multiplex with a few good wins on Oscar night:

LIVING THE DREAM: Speaking of front runners,Anne Hathaway's performance in Les Miserables was already getting Oscar consideration buzz before the film hit theaters and now her win in the Best Supporting Actress category appears to be inevitable.

Le Miz earned eight other noms,including a Best Actor for Hugh Jackman and Best Song,for "Suddenly",a song that is also up for a Golden Globe this weekend. While it does have a fair chance of winning a few of them,their biggest honor will probably go to Hathaway for her heartbreaking portrait of Fantine,which isn't leaving a dry eye in the house everywhere. At the end of the day,she'll be walking down the red carpet with some matching gold,a sure bet if there ever was one:

IN A STATE OF CINEMATIC SHOCK: A number of non-nominations made for some disappointment in a few quarters such as Ben Affleck's lack of placement in either Best Actor or Director for his acclaimed film Argo(which did get seven),Leonardo DiCaprio and Samuel L. Jackson not being up for Best Supporting Actor for Django Unchained(co-star Christoph Waltz has that spot)or The Dark Knight Rises receiving none whatsoever.

What amazed me was The Master earning three prime acting nominations,with Joaquin Phoenix up for Best Actor,Phillip Seymour Hoffman for Best Supporting Actor and Amy Adams in the Best Supporting Actress section. The Paul Thomas Anderson film did get a lot of critical praise for it's provocative tale of a troubled WWII vet being drawn into a cult but the parallels in the plot to Scientology did seem to be a potential hindrance to any award show accolades.

While I haven't seen the film yet,it is good to see some positive attention attached to it and nice to know that playing it safe isn't the only road for an artist to take in order to achieve appreciation from their peers: 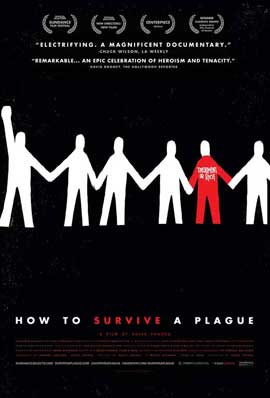 IN REEL AND REAL TIME: Certain categories at the Oscar I never do well with in guessing who is to win,such as Best Short Film,Animated or Live(although I am hearing some good word about a live action short,Diminished Chords,that's doing well on the film festival front lately).

With some of those Oscar areas,I tend to go along with the film that I have heard something about and there's been plenty of solid talk about How to Survive a Plague,which is up for Best Documentary.

The film chronicles the struggles of HIV/AIDS activists during the 1980s and 90s to raise public awareness about the disease and to get the government to pay some real attention to the growing epidemic. The Independent Spirit Awards also nominated HTSAP and the film has won honors from The Boston Society of Critics and the Gotham Independent Film Awards already.

This riveting look at the past efforts to prevent a critical illness from reaching mass proportions has current roots in the present day difficulties faced by those fighting for gay marriage rights and should provide encouragement for any group challenging the system for fair and equal treatment under the law:

SURPRISINGLY SWEET: The Best Song category has been sadly neglected by the Academy for awhile now,with only two songs being nominated last time around. That's all changed,as five tunes are filling that singalong section this year,with the theme from Skyfall,Le Miz's "Suddenly"(here's hoping that Adele and Hugh Jackman get to sing their nominated songs at the Kodak that night!),"Pi's Lullaby" from Life of Pi and "Before My Time" from Chasing Ice.

Believe it or not,the last song in this round up is from the surprise smash summer movie Ted and written by Oscar host Seth McFarlane,no less. "Everybody Needs a Best Friend" was sung by Norah Jones for the soundtrack and it's actually a nice number about the bonds of companion hood. Not what you might expect from the raunchy antics of Mr. Family Guy there but it tends to be the snarky ones who are the most sentimental:

Well,the fun begins and there will be tons of speculation before the big night on February 24. Some of that will fall on Seth McFarlane's hosting duties as well but as long as he takes tips from Ricky Gervais on what not to do,he should be fine:

Great write up! And yes, a thrill there are some great songs nominated... I think you hit the nail on the head on a few predicted winners. I don't see how anyone can beat Day-Lewis but I thought Hugh Jackson did a fabulous job... If Hathaway doesn't win - somethings wrong!