Wolfgang Puck stopped by to judge the Quickfire on Top Chef Seattle this week,with more product placement fun as Canada Dry sponsored the theme of ginger.

The chefs had fifteen minutes to make a dish that highlighted ginger in either a sweet or savory way. They were encouraged to use real ginger as well as the soda,which is fine,I guess but I suspect the real ginger would work better for most of the food put out here.

Immunity was up for grabs and that honor went to Brooke,for her ginger and caramel glazed squid. Another nice win for Brooke,she's been on fire for quite some time now and good on her.

The Elimination Challenge was announced as Restaurant Wars yet there was a significant change to the usual proceedings. Everyone was working solo,to come up with a concept for a restaurant and to make one dish that represented the theme.

The food and idea would then be presented at a culinary food event in vendor booths and they even had some sous chef help from contenders in Last Chance Kitchen(didn't expect to see most of those folks before the reunion show again).

Three people were up for the win,including Joshua who went with a bistro named after his deceased father. The cuisine was rustic meat and potatoes and he made a seared rib eye steak with cauliflower puree and a red wine mushroom sauce.

Despite the meat not being seasoned enough,the home style flavors and look of the plate was another redemption moment for Joshua,who is starting to catch up on the competition there. 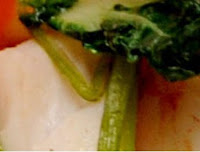 There were two winners of this challenge and one of them was Sheldon,for his sour tamarind soup served with pork belly and snapper. His theme was modern Filipino and Padma really admired how elegantly this dish turned out.

Since it was Sheldon's birthday,this was an especially nice win and he got some cash for it,plus a bit of extra responsibility for the next round. 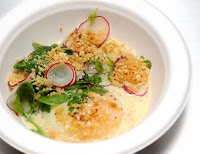 Kristen was the other winner,thanks to her classic French with a twist take on onsen egg with buttered radishes and a Camembert mustard sauce. The judges adored her formal yet inviting approach to food.

With this part done,the second half of Restaurant Wars was ready to begin. Sheldon and Kristen were given two days to set up their ideal restaurant in an empty space,which we'll see next week. In the meantime,they had to pick their helpers from the remaining contestants but to keep in mind that someone was still going to pack their knives and go. 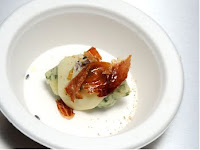 Landing in the Bottom Three was Lizzie,who chose a Northern Italian farmhouse approach and whipped up a mustard green canederli with crisped up speck and fonduta.

The concept was good but her execution of the dish was not. The dumpling came out gummy and the cheese sauce wasn't very flavorful. Lizzie got a little snippy with the judges during the panel session and I thought for sure she was in big trouble. 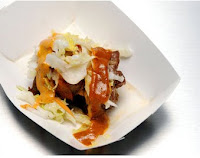 Josie was next to her,with another flop of a plate due to her poor time management skills. The pork in her pureco asado was tough and dry,plus the black bean chorizo cake served with it was soaked with that mojo sauce on the dish to the point of mush.

As much as I want to like Josie,she's making it hard for me to even want to see her continue with this competition. Josie,all the banter in the world won't make up for painfully slow food that's not worth the wait for,sorry. 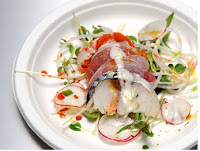 Lucky for her,it was Micah's time to head off to Last Chance Kitchen. His concept was food in the raw and he offered up slices of uncooked fish such as salmon,snapper and scallops with raw veggies and a simple dressing. Not much cooking going on there,buddy and this is a cooking show,you know?

I think part of the reason that he was shipped off to LCK may have been the statement he made during the culinary event when Judge Tom asked him about the lightness of the dish and he said something along the lines of "ladies looking to watch their figures." Dude,with two women on the judging panel,that's not a smart or sensitive comment to make,just saying!

Next week,part two of Restaurant Wars and it's difficult for me to choose between Sheldon and Kristen for the win. Sheldon is down one team member but then again,Josie is on the other team,so it's sort of even.

Bunheads returned for another mini-season,with all of the players lost and confused as Fanny's dance studio is shut down and not just for the summer.

The Nutcracker macing incident caused Michelle to flee to her friend Talia's place in Henderson,NV and take a thankless job as a magician's second assistant,while the girls are either taking care of quirky family members(Boo,Ginny and Melanie) or hiding out(Sasha).

What brings them all out of hiding is a viral video that highlights their awful dance recital moment,one of those clips taken from local TV news coverage and turned into a song. The tune's actually pretty catchy there:

This lead to Michelle coming back to Paradise and Fanny opening the studio again,which was a no brainer but still delightful to watch. The show seems a little steadier on it's feet so let's give it a fair shot,folks this time around. Plus,at some point we may see Sasha's parents together in one room,giving Michelle a break from catching Sasha with her sly secret boyfriend:

The long awaited third season of Downton Abbey arrived,bringing many new developments and characters,such as Martha Levinson,Cora's American mother who had plenty of opinions but not much money to give to save the estate(more on that in a moment).

Mary and Matthew finally got married,which gave her sister Sybil a chance to come home with her new husband and O'Brian an opportunity to have her nephew hired on as footman. Meanwhile,Anna is busy trying to overthrow Mr. Bates' conviction and Daisy was miffed about not getting the promotion she was promised by Mrs. Padmore.

Amid all of these and many more doings,the biggest challenge to everyone is the financial trouble that the estate is in,due to Lord Grantham's heavy railroad investment that took a bad turn.

What this may mean is that the family might have to retrench by giving up the big house,which would suit some of them fine. Cora is being very supportive of her husband and the realities of the situation,I have to say.

Mary,however,is not ready to downscale and nearly called off her wedding to Matthew,since he didn't want to accept an inheritance from his former fiancee Lavinia's family. Granted,I admire his morals but this change will also affect the staff as well and it would be good to think of their needs,too. Change is inevitable in life,fictional and otherwise,and it's a good opportunity to display depth of character(or lack there of):

This upcoming episode,Edith is stepping into the spotlight as her love life may actually come to something. I hope things work out for her,that girl would be so much nicer with a little bit of true happiness of her own. Then again,things are tough all over,even at Downton:

RACHAEL VS. GUY: This first round went well enough,but word to the wise for future celeb contestants:if you're going to enter a cooking competition,it helps to be able to actually cook. Peanut butter sandwiches are not going to cut the mustard at all: