The mood was subdued at Top Chef Seattle last night,as the aftermath of Kristen's dismissal(she did well in Last Chance Kitchen,btw)lingered in the air.

Nevertheless,it was time to embrace the new Quickfire Challenge. Special guest judge Katsuya Uechi was there to taste their sushi creations and see if they met his high standards.

A couple of chefs were already into sushi,so they thought they might have an edge. However,the winner here was Stefan,his first ever. He had trouble deciding what to make in the beginning and wound up doing two dishes,one yellow tail and the other lobster.

Unfortunately,immunity was not up for grabs but Stefan did win five grand. He could've really used the immunity since his Elimination Challenge offering was less than appetizing but we'll get to that soon enough.

Judge Tom and special guest judge David Chang entered the TC kitchen to announce the Elim,which was to make fried chicken dinner for the two of them and a few other notable foodie folk.

The guest list included Wolfgang Puck,Emeril and Michelle Bernstein. One thing that seemed to be a strong point of contention was that some of the chefs didn't cook the whole chicken and went for the white meat instead.

Personally,I love white meat chicken and would take that over a plate of wings any day of the week but that's just me and my taste buds there.

One of the chefs up for the win was Lizzie,who basically made chicken cutlets with coriander and black pepper,plus a peach cabbage slaw. The judges enjoyed the flavors but griped about her not using more of the chicken.

Chicken cutlets are a favorite meal in my house and while I'm not into any kind of slaw,Lizzie's plate would be emptied quickly at my family's dinner table.

Sheldon did serve most of his chicken but was short of a couple of wings,due to one of his batches burning up and not having enough time to make up for that.

Regardless,everyone loved his umami drumsticks and thighs,along with the wings seasoned with grapeseed oil. He might have gotten the win if those missing pieces had been replaced promptly.

Victory instead went to Josh,for his smoked chicken. The judges appreciated the hot sauce and blue cheese served it with for that buffalo wing kind of taste. His prize was a large set of wine(365,who came up with that number?)but I bet he would have preferred cash.

Then it was time for the Bottom Three and things got rather interesting. A couple of the losing contenders went with cop-out excuses but nobody was buying that line of
baloney today.

Brooke,to her credit,immediately owned up to the flaws in her dish. The dukkah crusted chicken breasts she gave them had been double fried,which dried out the meat.

It was also her bad luck that two of the guests(who have a place called Animal) had interviewed for line cook jobs at her restaurant years ago but didn't get hired. They promised good naturedly not to hold that against her but after eating her chicken,one of them remarked "Perhaps it was good we didn't get that job!"

Stefan made a traditional chicken cordon bleu,that didn't taste so great,and his reason for doing so to the judges was "I'm from Europe and we don't have fried chicken over there."

Padma then turned to Wolfgang and asked him about that. He totally pooh-poohed that notion and Judge Tom flat out said that Stefan was just trying to play it safe. At least, do something a little original with the recipe,dude,come on!

Lucky for him,it was Josie's time to go. She made a big deal about making "real Southern fried chicken" but despite the cayenne and garlic that went on,the food was a greasy mess.

She attempted her usual routine of talking her way out but Judge Tom was not having that anymore. He pointed out Josie's constant trouble with time management and didn't want to hear her excuses about equipment failure(she used one of Lizzie's friers when one of hers wasn't working. Lizzie was very generous to Josie all through prep,actually).

So,Josie at last went off to Last Chance Kitchen and faced off with Kristen,a nice grudge match indeed. Normally,I don't watch LCK(would like some surprises with this show)but I tuned in today and yes,folks,Kristen beat her fair and square. Hopefully,she'll be able to return to the competition very soon.

While there is a considerable amount of quirk on Bunheads,what with the charismatic brother-sister duo of Frankie and Cozette taking over the town and Melanie feeling the need to avenge her brother's break-up in very Hulk like fashion,but you can't overlook the dramatic developments there.

The biggest drama is in Sasha's situation,as her neglectful parents have decided to get a divorce and move away to different cities. Sasha's mother gave her an ultimatum: choose who you want to live with and do it now because I am so out of here. Nice,huh? Guess she memorized that section of the Mommie Dearest handbook on How to Mess Up Your Daughter Big Time.

Sasha refused to leave,to which her mother simply tossed her the keys to the house(which is already sold)and took off. Sasha then went to Michelle for comfort and it looks like she may be staying with her for awhile.

Granted,Michelle is rather ditzy at times(not surprised that she forgot to go to summer school to finish up her high school credits due to an extended Dollywood visit)but at least she actually cares about what happens to the girl. Sasha's emotional turmoil was displayed in a touching dance sequence that played over the end credits and so far,it's one of the most memorable TV moments of the year: 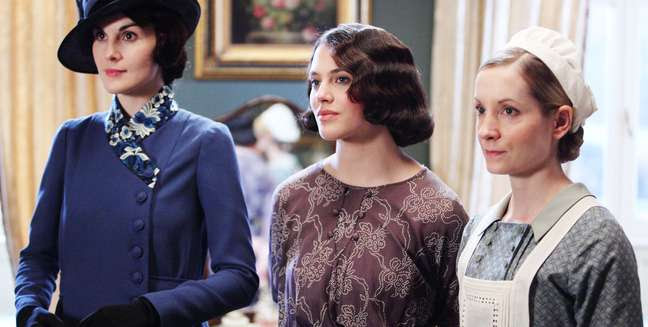 Even with Sybil's sudden departure from Ireland(Tom really needs to reassess his priorities there),things at Downton Abbey were calm for the most part.

Anna and Mr. Bates had their communication cut off for awhile,Daisy considered the possibility of hooking up with new footman Alfred(who seems to have an eye for the new kitchen maid)and another footman has been hired,a handsome fella named Jimmy who pleases the eyes of not just the ladies. Also,Edith received a much needed boost of confidence by having her letter to the editor of a London newspaper about the rights of women prominently published(good for her!):

That letter may lead to a regular writing gig for Edith,which would be great. Other promising new plot developments include a possible break in the case against Mr. Bates(fingers crossed!)and Thomas leaving himself vulnerable to payback from O'Brien,who he's been feuding with ever since her nephew Alfred was hired on. Even when it's quiet,there's never really a dull moment at Downton:

RACHAEL VS. GUY: Glad to see that Johnny Weir is still on board but dude,you need to cook something other than chicken! Turkey is not that much different,my friend-you have to change it up and soon there: