When it comes to DC Comics and their vast array of superheroes, the top three most well known names that quickly come to mind for most people are Batman,Superman and Wonder Woman.

The last on this list is the subject of comic book historian/blogger Tim Hanley's new book, Wonder Woman Unbound, which gets into the interesting social history behind this Maiden of Might. The subtitle,"The Curious History of the World's Most Famous Heroine" aptly describes the dubious fame of Wonder Woman.

Unlike her male counterparts(in Marvel as well as DC), she has the least number of film and TV adaptations and is often shoved into a supporting role when she is included. From the early years of her original conception in the 1940s by William Moulton Marston, she has been misunderstood and set up to channel certain ideals that some of her fans would be rather surprised to discover.

For example, that magic lasso that compels the captured person to tell the truth? Many took that weapon of Wonder Woman's as a version of the lie detector machine that Moulton invented but that's not what he had in mind( it could be considered a Georgia O'Keefe reference, let's just say). Marston intended for Wonder Woman to be the vehicle that would introduce the notion of female superiority to men, complete with bondage imagery that did raise a few eyebrows, yet unknowingly gave women of that time period a champion of their own: 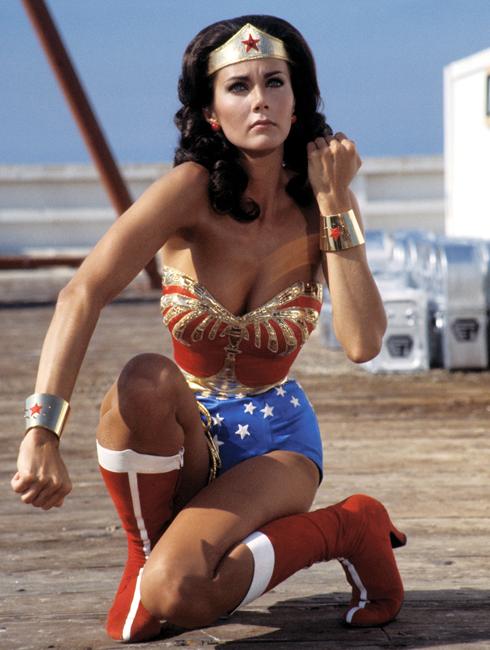 During the comic book culture clash of the fifties, Wonder Woman had to be made over in a more "family friendly" tone that highlighted the tortured romance between her and Steve Trevor to degrees that gave the book a soap opera flair.

A revamp during the 1960s rendered Wonder Woman powerless and had her Diana Prince persona become a violence prone avenger,breaking away from the more peaceful solution heroine she had been since her beginnings. That change turned off readers and encouraged the growing feminist movement of the 70s to adopt her as their icon and demand a return to her original Amazon roots(while ignoring the questionable images and ideals of her creator).

Her story lines waxed and waned in the comic books over the years but the character seemed to be best served(not without flaws,of course) by the late seventies TV show version of Wonder Woman played by Lynda Carter. To this day, it's the best known source of the general public's knowledge of the character and has yet to be equaled:

What is great about Tim Hanley's approach to Wonder Woman is that he expands the focus on the character in context, with looks at the philosophy of her creator, the social changes that influenced the direction she was taken in during certain times and a compare and contrast with other females in comic book history.

From how Lois Lane was treated poorly by Superman during most of the Golden and Silver Ages(and not just him,plenty of super bad boyfriends out there) to the rise of Bat Girl in the modern era who had the edgy flair that Wonder Woman should have received, Hanley engages the reader with his smartly written take on the subject matter that's backed up with facts and figures that enhances his views as well as gives the material the respect it deserves:

I first learned about this book at Smart Bitches,Trashy Books, thanks to a great review by Carrie Sessarego( who also did an excellent interview with the author at her own blog, Geek Girl in Love) and I hope my two cents added in here encourages more people to check out this amazing book.

As a fan of Wonder Woman since the Lynda Carter/Super Friends days, it pains me that there is still not a viable film version of her out there.

Even with the promise of WW being part of the upcoming Superman/Batman movie in the works right now, she ought to be much more celebrated than she is in the wider media realm. Perhaps this book will be one of the pivotal stepping stones that brings this Amazon princess closer to the cinematic throne that awaits her: