As a fan of Julie Klassen's Regency era novels, I was not only happy to hear about her latest release,The Innkeeper of Ivy Hill, but also to learn that this is the first entry in a series from her to be called Tales From Ivy Hill. When I was offered a spot on the blog tour for this book, my joy was complete.

The main plot of this particular tale focues on Jane Bell, a recent widow who is overwhelmed by the responsibilities of running the coaching inn that she inherited from her husband. With the business in bad financial shape, having her mother-in-law Thora(who is widowed as well) back home is rather a mixed blessing.

Despite the trouble that the inn is having, Jane and Thora both want to turn things around, particularly since the welfare of the village is strongly connected to the fate of the business as well. Such ties to the community remind me of how much of an influence the Independence Inn and the Dragonfly on Gilmore Girls were to Stars Hollow, not to mention the Stratford Inn on Newhart.

However, it's about more than just the inn in all three cases, as author Julie Klassen highlights in this special guest post. Here, she showcases the BBC series that many of us have enjoyed along with her that displays the English small town worlds that helped to create Ivy Hill on page:


Inspired by the BBC

As an author of historical fiction and an Anglophile, I have loved several BBC television series set in English villages, like Larkrise to Candleford, Cranford, and Middlemarch. I am drawn to their close-knit communities filled with unforgettable characters. The romances and family drama.

And, of course, the British accents. Now I hope readers will enjoy my first series, Tales From Ivy Hill, beginning with The Innkeeper of Ivy Hill. Here are a few ways I’ve been inspired by British programs:

And, like the rivalry between rural Larkrise and the larger town Candleford, my small village of Ivy Hill has a similar rivalry with neighboring Wishford:

Cranford: A series populated primarily with quirky and lovable female friends (and some of my favorite British actors like Judi Dench, Imelda Staunton, and Julia McKenzie)--what’s not to love?
Tales from Ivy Hill also focuses on friendship and women helping each other through challenging times, along with second-chance romance and touches of mystery, too: 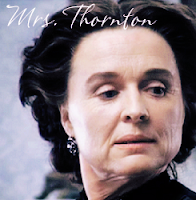 Elizabeth Gaskell’s North & South:  This is one of my all-time favorite miniseries. While not set in a village, it helped inspire the character of Thora in The Innkeeper of Ivy Hill, who has similarities to the gruff Mrs. Thornton.

North & South has inspired me in other ways over the years, too. For example, actor Richard Armitage as Mr. Thornton inspired the hero in one of my previous books, The Maid of Fairbourne Hall: Far From the Madding Crowd: Seeing the 2015 film spurred me to watch a few older adaptations of this Thomas Hardy book as well.

(I think  my favorite was the 1998 version starring Paloma Baeza and Nathaniel Parker.) One scene in The Innkeeper of Ivy Hill was partly inspired by a dramatic scene in the movie:

Jane Austen fans may also notice a nod or two to Pride and Prejudice in the book. Some readers have written to me, telling me they enjoy finding these in my books. If you are similarly inclined, I hope you will enjoy them as well.

Have you enjoyed these BBC programs? Do you have another favorite to add to the list?

My heartfelt thanks to Julie Klassen and her publishers for asking me to take part in this blog tour for The Innkeeper of Ivy Hill. I'm reading the book now and have to say that I truly look forward to visiting the residents of this town quite often in the future.

In the meanwhile, you can learn more about the Ivy Hill series here, at it's official website. The next stop on this blog tour will be at English Historical Fiction Authors for a look at the historical aspects of the story. I do hope that everyone also checks out the stop prior to mine that is over at Delighted Reader as well.

Like Ms. Klassen, I've also enjoyed the delights of both the book and miniseries editions of Cranford(which has a follow-up TV adaptation entitled Return to Cranford that is well worth looking for). Lark Rise to Candleford is a journey that I've just begun and should pair nicely with further readings of Tales From Ivy Hill.

Books like these are wonderful to share with friends, old and new and thanks to Julie Klassen, we will meet many more of them in the times to come:

I loved the book! I too love and adore my BBC period dramas! there have been several adaptations of Trollope's novels that I have loved! And as far as movies go I love Our Mutual Friend.

Oh yes, Becky. I loved Our Mutual Friend, too. And I'm a fellow Richard Armitage fan as well, English Lady!