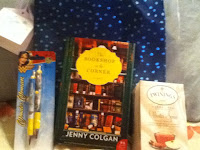 I know that we're in the midst of returns season(which is running smack into clearance sales celebrations) but I'm quite satisfied with my holiday gifts, especially the bookish ones.

Speaking of bookish, thanks to The True Book Addict's Bookish Secret Santa and my assigned gift giver Nicole, a lovely new addition to my library is Jenny Colgan's latest novel, The Bookshop on the Corner.

The shop mentioned in the title is actually a van, a mobile bookstore named The Little Shop of Happy Ever After(which happens to be the British title of this book) that newly displaced librarian Nina Redmond starts up with tons of tossed out books from her former branch.

Since the regulations for parking and selling are a tangle of red tape in her home city of Birmingham, Nina winds up taking her business to small towns in Scotland where the lack of libraries and bookstores are being most keenly felt. She also winds up settling in one particular spot and making some new friends along the way.

While Nina is finding her joy in doing what she does best,matching up books with people, she finds a bit of opportunity for romance that could be just as exciting as the ones from her favorite books. Yet, as in those stories, the true course of love doesn't run smooth but a happily ever after for her is not completely out of reach.

So far, this is a delightful read with engaging characters and gorgeous descriptions of Scotland that makes the wait for the next season of Outlander even harder to bear. Colgan has a charming knack for setting up typical story situations for her heroine that feel fresh and lively on the page. The love of books that Nina has is so relatable that you wish she was just down the street with a great new read to recommend.

Much thanks again to Nicole Huff for sending me this wonderful book(along with a set of Wonder Woman pens and Winter Spice tea) and I do hope that you have a lovely little bookshop like this one not too far from home:

As for my other book gifts, three of them are by the same author,Lauren Willig, and the same series as well. What I'm planning as a blog project for 2017 is a year long bout of what I'm calling "Series-ous Reading" as I intend to catch up with two series of historical fiction, Stephanie Barron's Jane Austen Mysteries and Willig's The Pink Carnation.

The latter is a string of books that have a modern day heroine, Eloise Kelly, discovering the history of a secret spy ring during the Napoleonic Wars and in particular, several female spies, the most elusive of all being the Pink Carnation. 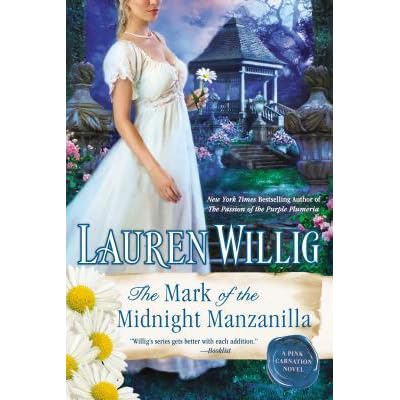 I have read the first two books as well as a couple of the later ones but I do want to try and get back on track by taking up the third book, Deception of the Emerald Ring. That particular book does have an Irish location at one point but I think that I'll be reading it well before St. Pat's Day there.

It was one of my Christmas presents along with The Garden Intrigue and Mark of the Midnight Manazilla. That last one I might save for October as the main plot has a vampire theme and that seems very suitably sinister for that time of year.

I will be posting reviews of the books as I go along and I hope that many of you out there will be happy to follow along with me, especially if you are a fan of either series. Lauren Willig does have non-Pink Carnation novels that are just as highly praised but I really want to delve into her take on the Scarlet Pimpernel legend more deeply:

During my Series-ous Reading time, I will be checking out the first book of other series to see if I want to tackle the entire set of titles that follows it.

One of those books I do have some knowledge of, as I saw the new PBS adaptation of Anne of Green Gables over the past Thanksgiving weekend. That was a nice film but reading the book feels like the best to truly appreciate the antics of Anne Shirley and friends.

My Christmas copy is a recent reprint with lovely cover art from Sourcebooks and if this one enchants me enough, I may add the other new editions from this publisher to my home library as well. No doubt, L.M. Montgomery reads well in any edition but I did want to meet her special girl with the right amount of bells and whistles:


Happy rest of the holiday season to everyone and I'll have more about my Series-ous Reading plans in the new year.  In the meanwhile, do your best to handle the post-seasonal blues, even if all you have left is a whisper of peppermint: